Universidad de Alcalá: A Day in the Life 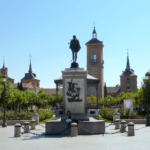 I went into my master’s program at Spain’s Universidad de Alcalá convinced I wanted to be an interpreter. A year later I was a passionate translator. Sitting on the edge of my seat in a conference booth interpreting for a Finnish researcher; sandwiched next to an African immigrant across from a Spanish social worker; carefully situated between a Spanish therapist and her American patient—all of these experiences were exhilarating. It’s just that somehow I took much greater pleasure in searching tediously for parallel texts as I translated a 50,000-word European Union bill.

The two internships I did as part of the master’s program couldn’t have been more different: half of my time was spent interpreting for a drug and alcohol abuse program through Madrid’s public health department, and the other half was spent working alongside two classmates to translate a lengthy bill for the Spanish Ministry of Justice on the exchange of criminal background data among EU member states.

Interpreting, though thrilling, made me nervous, while translating made me feel absolutely exuberant. One thing that good translators and good interpreters have in common is that both are perfectionists. I too am a perfectionist—for better or for worse. But studying translation and interpreting at the same time made me realize that I am the kind of perfectionist who cannot live with providing perfection on the spot. I’d much rather take my time finding the perfect solution—and that’s how I came to be a translator.

I began the Master’s in Intercultural Communication and Public Service Interpreting and Translation at Universidad de Alcalá (UAH) in 2013. The university, one of the oldest in Europe, is located in Alcalá de Henares, a small city in the autonomous community of Madrid. Among its claims to fame, Alcalá is the birthplace of Miguel de Cervantes and the location where the first polyglot Bible was printed.

The university has offered a master’s in translation and interpreting (T&I) since 2006, and the program has belonged to the prestigious European Master’s in Translation network (EMT) since 2009. The EMT vets universities based on certain standards for translator education, with the aim of improving the quality of the incoming workforce.

The master’s at UAH is geared towards students with undergraduate degrees in T&I or those who are already working as translators or interpreters, though these are not strict requirements for admission (proof of language command is!). Some of my classmates were already sworn translators or practicing interpreters, while others were medical professionals or paralegals. One was even a teacher who won a popular game show on Spanish TV and decided to spend the prize money on taking his career in a new direction. I myself had been working in education and public services (at a library in the US and later as a cultural ambassador for the Spanish Ministry of Education in Madrid) for three years leading up to my discovery of the field of translation and interpreting.

In line with the program’s goal of improving the skills of existing translators and interpreters, the curriculum is more practical than theoretical. The first half of the program consisted mostly of interpreting role plays and independent translation assignments that we reviewed together in class. Our instructors were all talented translators and interpreters whose engagement in the profession allowed them to offer us relevant insights and anecdotes, giving us a taste of the world outside the classroom.

The program is organized in cohorts based on language pair, with a considerable offering (all in combination with Spanish):

Students with opposite A and B languages are placed together in each cohort (for example, there were native Spanish speakers as well as Americans and Brits in my cohort), and all students practice bidirectional translation. In my case, this meant translating not only from Spanish to my native English but also from English to Spanish. Translating in both directions allows students to offer better feedback and to benefit from one another’s strengths.  I found that translating into Spanish improved my Spanish writing skills and also deepened my knowledge of equivalent terms and concepts in both languages and cultures.

Some other noteworthy aspects of the program are:

And I could go on! But at the end of the day, one of the greatest values of the program was being humbled by my fellow students, many of whom have gone from classmates to lifelong colleagues and friends. I still collaborate with some of them on projects now that we are “real-life” translators and interpreters, even though we’re scattered across the globe!