While the pandemic and its knock-on effects have had a major impact on ATA’s revenue and expenses, the Association remains on fairly solid financial ground as a whole.

This annual report reviews ATA’s financial performance from July 2020 to May 2021. While not directly comparable with previous fiscal years (which end in June), it does provide a good indication of current trends. The results herein are preliminary and will be reviewed by independent auditors. To get a sense of how the Association is doing over time, we begin with a comparison of headline figures. (See the table below.)

At the organizational level, ATA has been doing a pretty good job of adapting to the new normal, all things considered. Starting with membership, we were able to weather the worst of the past 18 months without suffering a major decline. That’s a significant accomplishment, given concerns a year ago about the effects of the pandemic-induced economic crisis. Peak numbers have continued to fall year-on-year but are far from catastrophic.

Likewise, at this time last year, we were about to host our first-ever fully virtual conference. The impacts of that decision appear throughout this report. The Annual Conference is a major component of the Association’s financial success, normally generating about one-third of our revenue, covering a significant portion of overhead at ATA Headquarters. While it was a much smaller affair, bringing in just $490,914 in revenue, compared to the $833,861 we generated in Palm Springs, the hard work of staff and volunteers resulted in a much less expensive event, with total costs cut nearly in half. Those efforts should be applauded.

Overall, right now, we are looking at less total revenue and lower expenses for the fiscal year. Both are examined in more detail below.

During the most recent fiscal year,1 ATA booked $2.21 million in Total Revenue, while incurring $2.23 million in Total Expenses. The result was a slightly negative Change in Net Assets (before investment activities) of (-$13,351).2 (See Figure 1.) This bottom-line figure was an improvement year-on-year, as certain expenses were kept in check by the pandemic.

As mentioned at the outset, Membership dues ($1.56 million) remained the main source of revenue, though they were down somewhat (-5.2%) from a year before. The fully virtual Annual Conference generated significantly less revenue (-$342,947) than the event in Palm Springs, but its lower cost enabled us more or less to break even. Another major decline was revenue from Certification ($63,050), down (-67%) year-on-year as a result of almost no exam sittings during this period. Nearly all revenue came from certification practice exams. One bright spot was revenue from Webinars ($75,410), which tripled from a year earlier, with more webinars offered and higher average attendance. We are on track to record a 162% improvement in this program’s performance over June 2020.

Other good news is that Total Expenses were significantly lower (-20.4%) for many of these same reasons. (See Figure 2.) The majority of ATA’s spending (62%) went to Program Services ($1.39 million) after overhead allocations.3 Spending on the various programs was much lower (-27.9%) mainly because the virtual Annual Conference ($411,018) cost so much less than a conventional event. In addition, Certification program expenses ($178,519) were down quite a bit (-33.4%), as fewer exams had to be graded.

Supporting Services accounted for the Association’s next biggest expenditure, at $835,155, and they were also kept in check (-6.1%). These services include staff salaries/benefits, general and administrative expenses, Board meetings, public relations, marketing, etc.

Figure 2 shows how ATA spent its money over the first 11 months of the fiscal year. 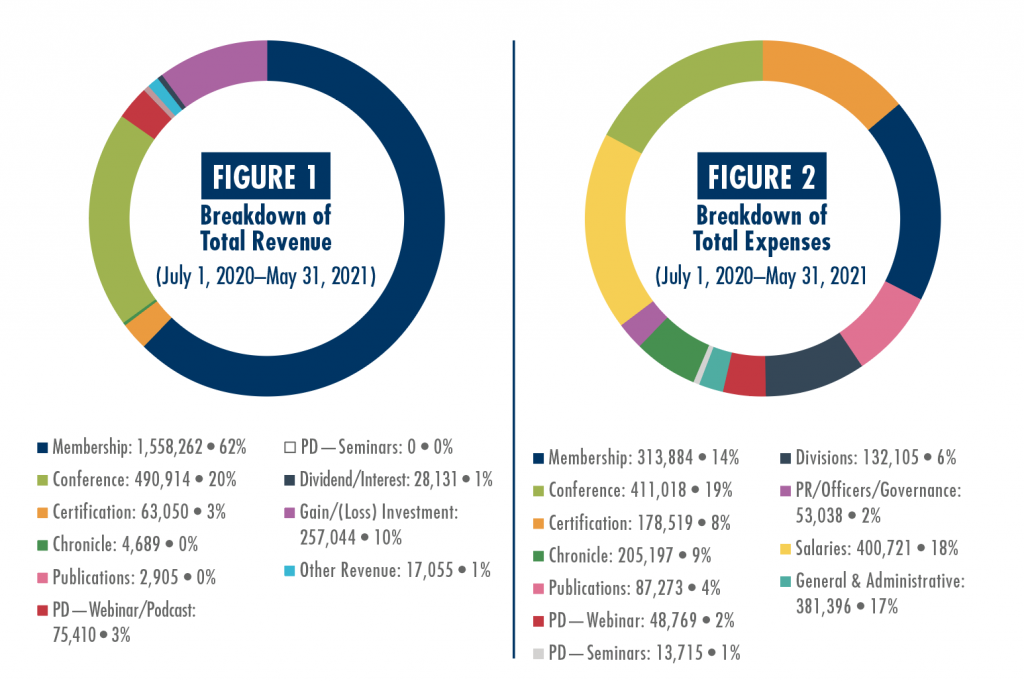 Individual ATA programs tend to run at a loss, meaning they are not self-sustaining and require membership dues to finance them. Figure 3 shows the revenue (blue), expenses (green), and net gain or loss (gray) for each program. For instance, the gray section of Membership shows the positive net funds available ($1.24 million) from dues, after deducting overhead. Whereas the column next to it, Publications, contains a negative figure (-84,368), meaning that this program is in the red and needs dues to operate. Note that individual columns are not to scale, in terms of comparing figures from one with another.

Certain programs, such as the Chronicle, Divisions, and Seminars, were almost entirely subsidized by dues. Other programs, including the Conference and Certification, generate some revenue that helps offset their costs.

So far this fiscal year, two programs are in the black: the Conference and Webinars, which have brought in enough revenue to cover their respective expenses. 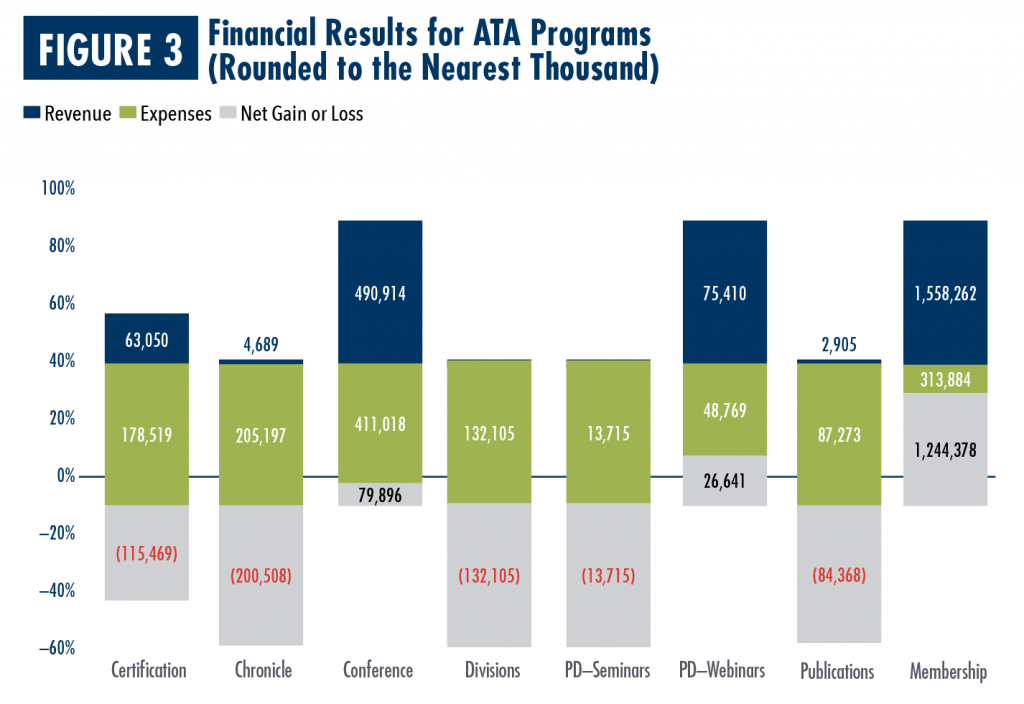 While the pandemic and its knock-on effects have had a major impact on ATA’s revenue and expenses, the Association remains on fairly solid financial ground as a whole. The headline figure from our Statement of Financial Position (i.e., balance sheet) as of May 31, 2021, is a positive change (16.6%) in Total Assets from $2.86 million a year ago to $3.33 million this year. (The statement can be found further down.) While having more assets is a good thing, it’s important to point out that the main reasons they grew so much during this period were actually due to improvements in Cash, in large part as a result of receiving a (forgivable) Paycheck Protection Program loan, and our Investments (up 25.7% year-on-year), rather than the performance of our operations.

Total Liabilities also rose during this same period (28.3%), from $1.41 million to $1.81 million, with an increase in Deferred Accounts accounting for nearly this entire change.

With both total assets and total liabilities increasing during this period, the key item to keep an eye on is the change in Net Assets—Unrestricted, which was up slightly (5.2%), from $1.45 million a year ago to $1.52 million this May. That positive figure means that the Association’s net worth is moving in the right direction.

The financial performance of the 2020 Annual Conference was in doubt from the day it became clear that ATA could not hold a traditional in-person event in Boston. Going fully virtual came with quite a few challenges, not just technically and operationally, but in terms of planning and budgeting for something the Association had never done before. We knew that it was going to be smaller and bring in less revenue, but a year ago it was unclear as to whether it could be profitable, or, at the very least, not lose money. Well, now we know.

The figures, at this point, look encouraging. The two pie charts in Figures 4 and 5 show where the conference generated its revenue and how that money was spent.4

As seen in Figure 4, Registration was obviously the main source of revenue ($431,134), but ATA also brought in some money from Advanced Skills and Training (AST) courses, sponsorship, and exhibitors.

On the other side of the ledger, the virtual aspect of this conference resulted in new spending patterns. As can be seen in Figure 5, Audiovisual costs accounted for nearly half of all outlays. That makes sense for a fully virtual event. Overhead at ATA Headquarters is the next largest slice, but bear in mind that the staff works on the conference year-round to make it happen. And then things diverge significantly from a typical year.

We would normally expect to spend around $250,000 on the hotel/meeting venue, which would include food, beverages, physical space, and travel. Instead, our next biggest cost was Experient (now Maritz), our event planning partner, whose fees are usually rolled into the venue expense. There would also be another $100,000 or so spent on items such as in-person division activities, clerical work, equipment rental, insurance, and the like. Hosting an online event eliminated them all, which is why our overall expenses were so much lower.

The upshot is that the virtual conference generated $490,194 in revenue, while incurring only $184,220 in direct costs. In short, it more than paid for itself. Plus, this surplus has covered most of the allocated overhead. Once the figures from June 2021 are final, the expectation is that the event will have at least broken even and may have made a slight profit.

Turning our sights on this year’s conference in Minneapolis, the biggest financial concern has been planning and budgeting for yet another unprecedented event. We learned a lot from the 2020 virtual conference, but unfortunately, hosting an in-person event with a virtual component is essentially a new undertaking.

For starters, we not only have all the normal in-person expenses mentioned above but also a set of additional costs related to streaming this content to virtual attendees. In addition, with the uncertainty caused by the pandemic, it has been unclear how many people would actually register to attend in person, how many would watch from home, and how many might choose to skip this year’s event entirely. As it turns out, this last variable has proven to be the hardest to estimate and the most significant for ATA’s bottom line.

For years, we have noted that when an Annual Conference does well financially, ATA does well as a whole. This year is no different. We know that attendance is down and expenses are up. That’s not a recipe for financial success. But the Association prudently manages and invests its money for just this type of scenario, where so many factors are out of our control. We will likely take a hit from this year’s conference, but once again, ATA will learn from the experience, which should be helpful in planning future events. 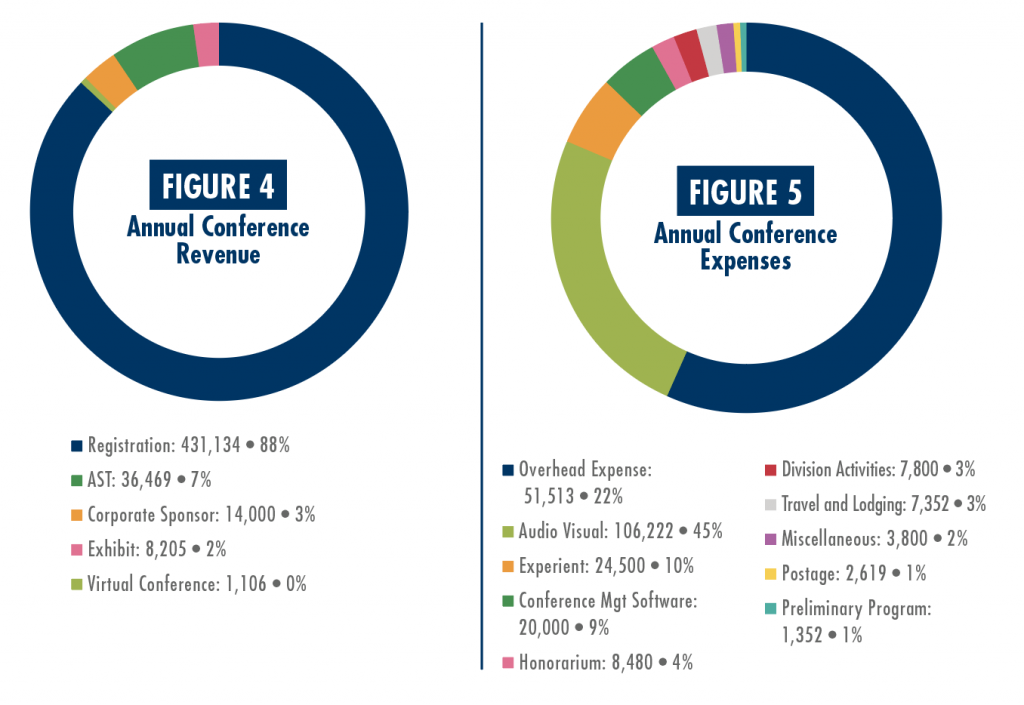 The Budget and Beyond

ATA has an annual operating budget of roughly $3 million. It varies somewhat from year to year, but that figure is what the Association needs to operate in its current form. Membership dues are budgeted to provide the lion’s share (61%) of these funds, with the Annual Conference (26%) and Certification Program (10%) making up much of the rest.

Like many membership-based organizations, ATA’s total membership has been slowly declining over the past 10 years. Efforts have been (and continue to be) made to reverse this trend. In fact, the Association’s retention rate with existing members has been north of 80%, an enviable achievement. But the data indicate that we are becoming a smaller organization overall.

At the same time, we have seen declining attendance at conferences. Granted, last year and this year are outliers because of the pandemic, and the venue locations in both 2018 and 2019 were in smaller cities (New Orleans and Palm Springs, respectively). Nonetheless, attendance has been down, and until we see more people showing up (possibly in Los Angeles this year), we should assume from a financial standpoint that the Association will generate less revenue from these events in the near term.

I mention these two points—declining membership and smaller conferences—as a segue to the drum that I have been beating for the past few years: the need to rethink and restructure ATA for our new reality. Restructuring is both an organizational and financial imperative. ATA Headquarters has been leading the way, with staff already working in a hybrid remote/in-person situation, while exploring various avenues for cutting overhead costs and shrinking the size of the office footprint. Every ATA member involved in a division or a committee can likewise help by thinking of ways to streamline interactions and operations. This collective effort will enable us to create a financially healthy and sustainable organization. 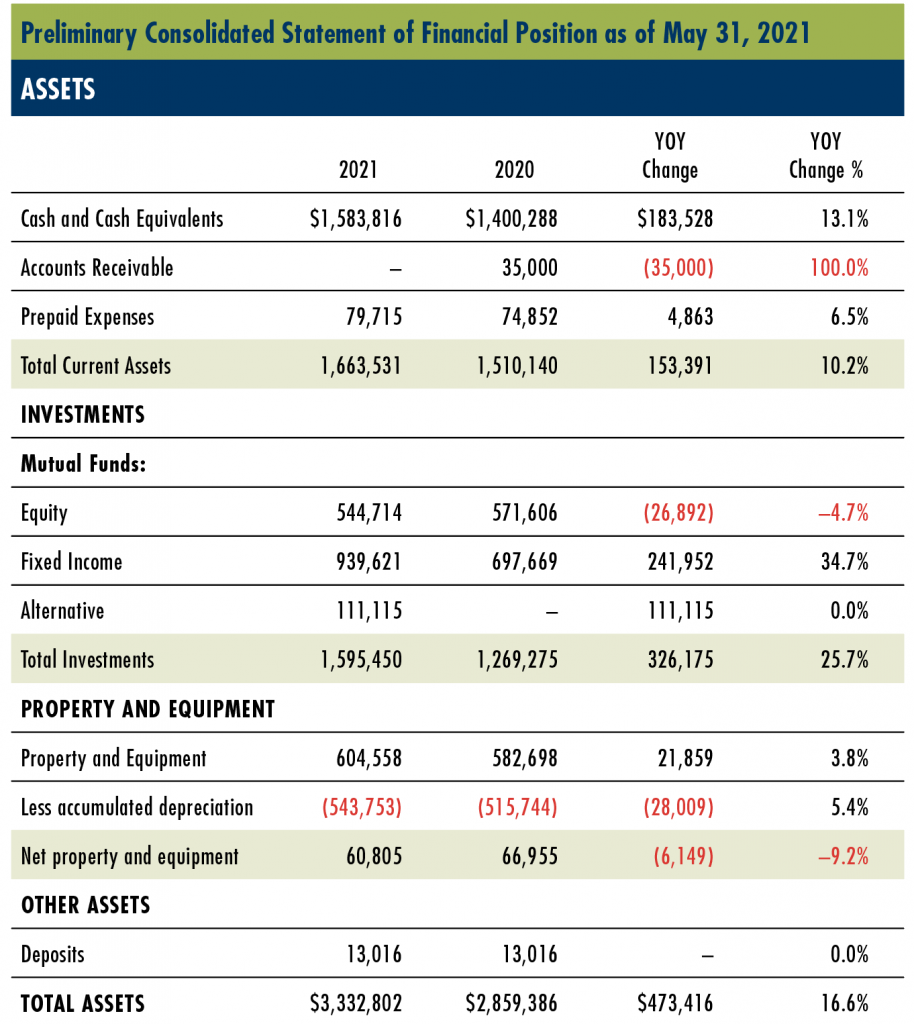 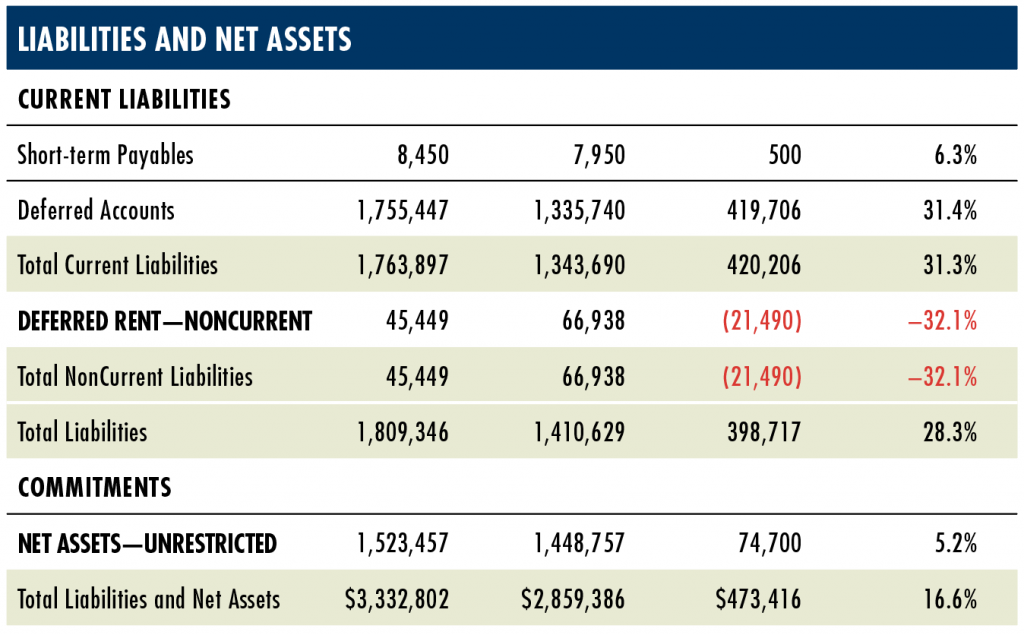 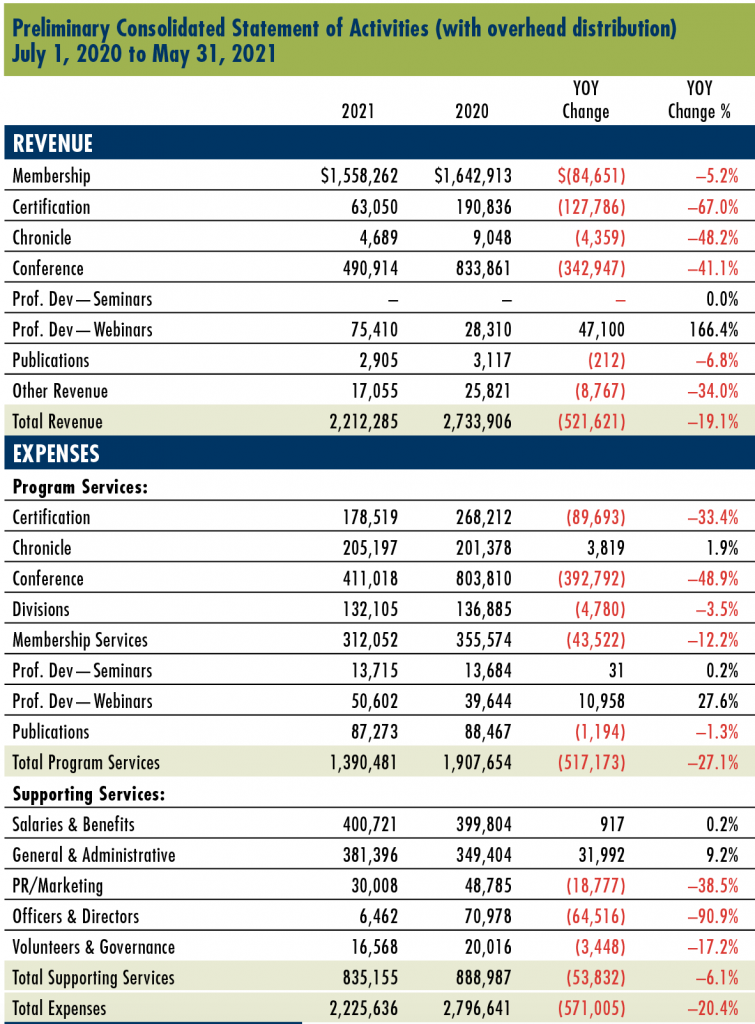 John Milan, CT is the treasurer of ATA and chair of ATA’s Finance and Audit Committee, as well as the Strategy Committee. He is also an ATA-certified Portuguese>English translator. He is an economist, writer, and lecturer on the business and economics of language services. He was an adjunct professor of economics in São Paulo, Brazil, for 10 years. He has been involved in the Carolina Association of Translators and Interpreters (an ATA chapter) since 2005, spending eight years on its board of directors, serving as president from 2013–2016. He has an MS in applied microeconomics from Ohio State University and degrees in international political economy and Spanish from Indiana University. john@milanlanguageservices.com