Future Tense: Thriving Amid the Growing Tension between Language Professionals and Intelligent Systems

Growing Your Career, Tools and Technology
By The ATA Chronicle

With accelerating technical changes in the industry, the best way forward is not to fear neural machine translation and artificial intelligence but to use a disciplined approach to reinvent yourself.

The translation and interpreting professions are thousands of years old. Throughout the ages, every major technological advance having to do with the rendering, storing, or processing of language has required a rethinking of the way language professionals conduct their work. These days, the talk is all about neural machine translation (NMT) and artificial intelligence (AI) and whether they pose an existential threat to the translation profession. The changes occurring around us present such a radical shift in the tools available for translation that it’s not merely time for us to rethink but to reinvent our industry and ourselves.

The Law of Accelerating Returns

That things are changing for translators is nothing new, but what is different is the rate of change. If it seems to you that technological advances are coming faster than ever, then you have a good sense of what’s going on. In his 2001 paper “The Law of Accelerating Returns,” futurist Ray Kurzweil posited that our rate of technological advance doubles every 10 years, which can basically be explained by our ability to use the latest technological efficiencies to speed the development of the next wave of technology.1 Instead of arguing whether or not this is true, I’ll simply use Kurzweil’s statement as a way to explain why my head is spinning.

To make the math easy, let’s start this example in 1980, when I began my university studies. At that time, my decade-long frame of reference for the speed of technological advance was the 1970s (which brought us pocket calculators, the video game Pong, VCRs, the C programming language, the Apple II, and the Sony Walkman). If we assign a value of 1 to the rate of technical change in my reference decade and that rate doubles every 10 years, then the rate of technical advance in our current decade is 32 times faster than it was back then. Let that sink in for a moment. According to Kurzweil’s model, the technical advances that we churn out in the 12 months of 2020 would have taken 32 years of effort back in 1970.

A curious thing about human beings is that we tend to place ourselves in the middle of everything, including exponential growth curves, which makes it challenging for us to comprehend extreme rates of change. In Figure 1 on page 30, which places 2020 in the middle of a timeline that illustrates Kurzweil’s Law of Accelerating Returns from 1950 (the decade that saw the first serious work on MT) through 2100, we’re still on a flat part of the curve, and the truly dizzyingly steep part of the curve is yet to come.

But it’s critical to remember that the growth is exponential throughout the curve. In Figure 2, we see the identical growth curve, also beginning in 1950, but at a scale that allows you to appreciate how much the rate of technological advance has increased recently.

While NMT is already having a tremendous impact on the way many professional translators work, technological advances that bear directly on our work—including but certainly not limited to MT—will not only continue but actually accelerate and have profound effects throughout the industry. The day-to-day work of the translator of today will be hardly recognizable to a language services professional in 2030.

Why is AI Coming After Language?

The intentional application of nuanced communication is one of the main measures we use to signify intelligence in living organisms, and we also extend that measure to manmade objects. A robotic vacuum cleaner that bumps into walls and then turns around and travels in a straight line until it hits the next obstacle in its path is clever, perhaps, but brutish. A smart speaker, on the other hand, which has the ability to understand spoken commands and responds in kind, is on a completely different level.

Linguistic sophistication is so integral to our understanding of intelligence that it’s hard to imagine us calling anything “intelligent” that doesn’t have the capacity—or the ability to develop the capacity—to understand and manipulate language. AI needs the ability to use language to live up to our expectations of what it should be. 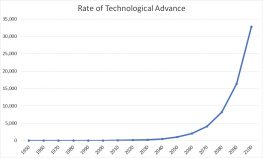 Figure 1: An exponential curve covering 100 years, centered on 2020 (The figures on the vertical axis represent the rate of technological change compared to a base of 1 in the 1970s.)

As cyberpunk novelist William Gibson said in an interview in The Economist in 2001, “The future is already here; it’s just not evenly distributed.”2 It’s one thing for technology to be developed and available, but it’s another thing altogether for it to be deployed widely and used.

In our famously fragmented industry, where, according to CSA Research, the top 10 companies make up less than 10% of the market3, it’s not surprising that technology advances at markedly different rates among the various types and sizes of language services providers. From multinational language services providers with millions of dollars of revenue, to regional players, to local translation shops, to individual language professionals, we all have limited amounts of time and money to invest in technology, and we make those investments as wisely as possible to excel in our specific markets.

The fundamental questions that should be on the minds of every language services provider who intends to be gainfully employed in the future are:

In other words, the pertinent question is not “Will NMT and AI systems make translators obsolete?” but instead the much more optimistic and self-directive, “What do I need to do to thrive as a language services provider in the future?” If you’re not paying close attention to technology trends, however, you won’t have an adequate answer to that question. After all, your customers’ needs and those skills and tools you need to develop don’t exist in a vacuum but in a world that’s increasingly imbued by ever more intelligent systems.

The Evolution of Intelligent Systems

AI systems, both current and future, can be classified along a spectrum of how autonomously they are able to act.

Systems that do: These are machines that perform a single, albeit sometimes very complex, task that requires the acquisition and application of knowledge. This knowledge is presented to the system in the form of many examples of the starting point and end point of the task (such as a massive translation memory used as training material for an MT system). These systems can never be better than the training material and are unable to improve without human intervention.

Systems that learn: These are machines that can not only perform a task that requires the acquisition and application of knowledge, but can also iteratively improve their performance of that task without human intervention.

Systems that truly think: Also called artificial general intelligence (AGI), these are machines, still in the realm of science fiction, that can learn to perform and recursively improve at any task, and have autonomous decision-making abilities, including, for instance, making the decision to adopt a new goal and learn new skills.

NMT and most AI products in use today fall into the first category, but there are already some nascent technologies that can improve performance autonomously, such as robots that get better at walking as they gain experience of their environment. Sceptics think that we’ll never reach true AGI, and even strong proponents of AGI predict that we’ll need decades to produce computerized systems that mimic and ultimately surpass a human being’s ability to assess performance, determine what needs to be done to improve that performance, and then take the necessary steps to do so.

If humankind ever manages to create AGI, then that invention will have the ability to improve itself. In his 2017 book Life 3.0, Max Tegmark presents a hierarchy of goals that futurists predict will evolve in AGI systems, regardless of what their initial primary goal is.4 (See Figure 3.) These subordinate goals will allow such a system to continually improve its capacity to achieve its primary goal.

With these sub-goals in place, the AGI system will become increasingly efficient at achieving its primary goal until that goal is deemed no longer necessary, and then it can move on to another goal. In other words, an AGI system will not worry about making itself redundant because it has a disciplined approach to honing skills and finding problems to apply them to. 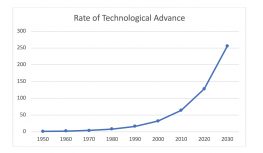 Figure 2: A truncated view of the same exponential curve (The figures on the vertical axis represent the rate of technological change compared to a base of 1 in the 1970s.)

The Evolution of You

Technical advancement is accelerating all around us. It will have a dramatic impact not only on your work but also on the needs of your customers. And while we can get sucked into thinking that we are or will soon be competing with increasingly intelligent systems for translation work, that’s a self-defeating attitude that ignores potential new opportunities for fulfilling the changing needs for language services. After all, the fact that a $20 pocket calculator can do higher mathematics has not reduced the value of understanding mathematics for an engineer. But engineers spend much less time doing math these days than they did back in the age of the slide-rule.

Similarly, a person with refined multilingual skills who fearlessly interacts with technology and has the ability to adapt and develop new skills will continue to be a valued asset. But you’ll spend much less time translating. Exactly what your work will look like depends on how you, as a “natural” intelligent system, respond to the business environment and technological environment in which you work.

Learning from the Intelligent Systems that Learn from Us

Success for a language services provider requires a disciplined approach to defining what the customer needs and what skills and tools are required to fulfill those needs. Why not immediately adopt the method of continual improvement that futurists predict AGI will have someday? In other words: 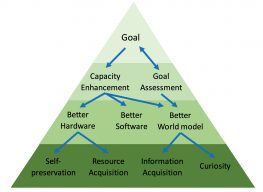 Even if you’re still in a quiet and comfortable corner of the language services industry, be aware that tumultuous technology-driven change is coming, both in terms of the way we work and what customers require of us. Agility will be increasingly critical to success. The big institutional players of recent years will likely struggle with procedural inertia. And there will be great opportunities for intrepid language professionals who work toward a virtuous cycle of thriving alongside intelligent systems in the fulfilment of their customers’ requirements.

Jay Marciano has been involved in the development and application of machine translation (MT) for 22 years. He has held leadership positions at Lionbridge and SDL, where he was responsible for the development and application of MT. He presents widely on the future of the language services industry, and has been a central figure in building understanding among language service professionals of the power and potential of MT. Contact: jaymarciano@gmail.com.