People Do Business with People They Know, Like, and Trust 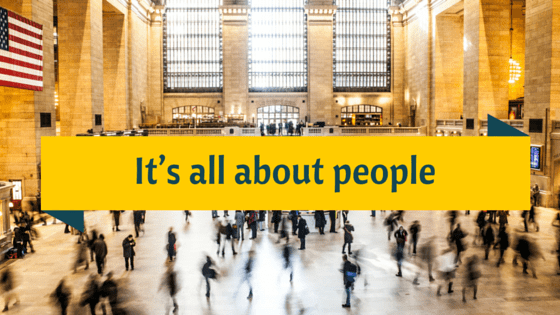 One of my more menial but surprisingly rewarding jobs during college was working at a Chick-fil-A. This came in handy recently when I had to translate a 20,000-word catalog of industrial kitchen equipment, most of which I would have never laid eyes on had it not been for the many hours I spent chatting in the “back of the house” with the Mexican kitchen staff of the franchise I worked at. But a knack for Spanish and a knowledge of the difference between fregadero and lavamanos aren’t the only thing I gained from this experience; my years there also gave me very valuable insights about customer service.

In case you’ve never been to a Chick-fil-A before, I’ll fill you in: Chick-fil-A is a fast food restaurant that regularly wins accolades for delivering on its stated goal of providing customers above-average service. From greeting customers cheerily when they walk through the door, to always responding with “It’s my pleasure” when guests say “Thank you,” to anticipating unspoken needs, the chain’s positive culture is contagious. During the four summers I worked there, I saw time and time again how genuinely impressed our customers were when we as employees provided service that went above and beyond their expectations, and it was this type of experience that endeared them to our brand and kept them coming back to us.

I’m happy to report that my Chick-fil-A days are over (the uniform wasn’t particularly flattering, and I didn’t love cleaning waffle fries off the floor), but the will and passion to serve my customers remains. As I launch into a full-time freelance career, I’m continuing to learn the importance of serving customers—and the line between that and letting them walk all over me. I don’t bend over backwards to do unpaid work when a client asks for a “quick favor,” but I do go the extra mile in order to make each client feel that they are important.

One client recently wrote me this: “Your work is like a wrist watch; every gear has to do its intended job so that the clock can function. You not only installed the gear, you did extra work, like adding oil to it.” I believe in producing high-quality work so that each client knows that I have gone above and beyond in my work for them. Providing this type of experience leads, as I learned during my restaurant days, to loyal clients who trust me because they know that I have gone the extra mile to exceed their expectations. Along these same lines, I’m also learning the truth to the saying that “people do business with people they know, like, and trust.”

This phrase puts into words a phenomenon with which I have become familiar: social capital. Similar to the concept of economic capital, social capital is the set of resources and connections that a person has and can mobilize in order to gain more resources. In a nutshell, it’s your network. In May 2015, I completed a master’s thesis at Kent State University, for which I translated a sociological journal article on this topic (interested? Read my translation here). The author actually tries to debunk the concept of social capital, but I found the phenomenon to be very applicable to my own work.

In the business world, an example of social capital is the idea that it’s not what you know, it’s who you know. When I look through the list of clients I’ve done work for in the last six months, and think about how I became connected with them initially, more than 90% of my income has been from clients who I either met at an American Translators Association conference, or who were referred to me by someone I knew personally. Only 10% came from listings in online directories or marketing emails I sent. Think about where the majority of your projects come from. How many of them were the result of a connection with someone who knows, likes, and trusts you because you made a personal connection with them?

When I look at that list and think about how social capital has played a role in starting my business, it highlights something that my dad has always told me: “It’s all about people.” This is something that doesn’t come easily to me, as a task-oriented translator who works from home. It’s also part of the reason I attend the ATA conference, try to maintain my relationship with classmates from undergrad and grad school, and am getting involved in my community. Social capital is real, and we need it for more than just business reasons.

I also want to emphasize that the title of this article doesn’t only go for freelancers. I unwittingly proved it recently when I hired a lawyer to set up my LLC. I made a lot of calls and emails looking for the right person for the job. One person responded two weeks later saying that he’s not good with “these machines” (meaning email) and didn’t realize he had never responded to my message. Do I trust him? No. One person I spoke with on the phone gave me the distinct impression that I wasn’t worth his time. Do I like him? No. One person was referred to me by a translator I know in the Philadelphia area. When I called, he responded immediately. He was knowledgeable, friendly, and professional. In the words of Goldilocks, he was “juuust right.” Which of these do you think I chose to set up my business? Professionalism and quality are important—don’t get me wrong—but when push comes to shove, people do business with people they know, like, and trust.

Moral of the story: be someone that people know, like, and trust!