How to Have a Super First Year in the ATA: The School Outreach Program 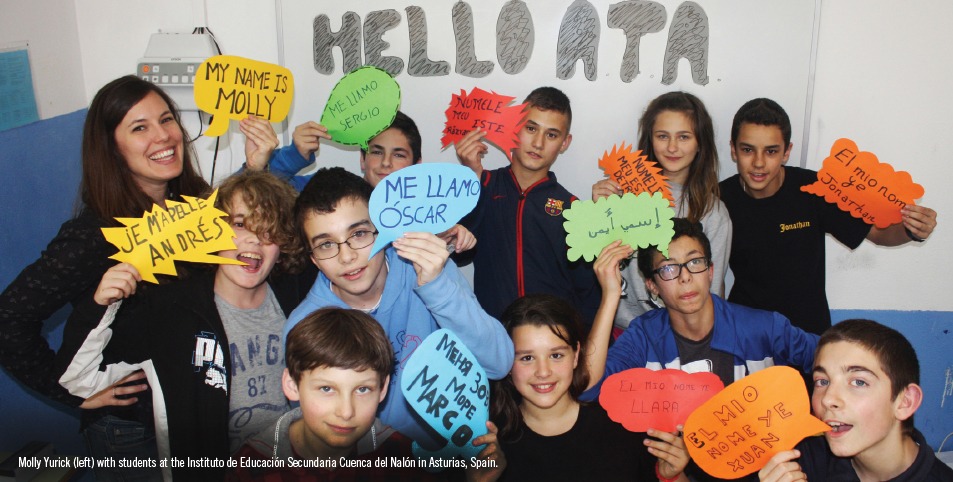 Welcome to the second article in the series How to Have a Super First Year in the ATA. This time, I’ll be talking about my winning experience in the School Outreach Contest.

As a new ATA member in 2015, I received my first edition of The Chronicle and was intrigued by the article about Jenny Stillo, the winner of the 2013–2014 School Outreach Contest. At the time, I was in my sixth year working for the Spanish Ministry of Education as a cultural ambassador, which involved visiting students of English in public schools across Spain. The combination of the chance to win a free registration to the conference in Miami and the opportunity to teach students about my passion and (at the time) part-time job was what inspired me to participate in the program.

My Preparation Process and Presentation

I started by checking out the resources provided on the School Outreach Program’s website (http://www.atanet.org/ata_school/) to see the content of past participants’ presentations and how they made themselves stand out with their winning pictures.

I then decided to make my own presentation from scratch. I started by introducing what interpretation and translation are, who linguists work for (agencies, direct clients, the UN), and what they specialize in. I also touched on life-changing “translation fails,” for example a boy who tragically became a paraplegic due to the misinterpretation of a medical term and an international bank that lost millions. I ended the session with two interactive activities. (You can check out my presentation on the School Outreach website: www.atanet.org/ata_school/level_middle.php.)

The first activity was based on a very real-life situation for these kids. Language students all over the world love to use Google Translate to do their homework, and I wanted to show them that they could do a better job than their computers could. I started by showing them a picture of a mistranslation, a sign that said “Exit Only” in English and “Éxito Aquí” in Spanish (“Success Here” in English) — they all laughed and wondered how anyone could ever translate so poorly. I then asked them if they thought Google Translate could do a better job… and the majority of them thought it could. I showed them that Google’s translation of “Exit Only” was “Única Salida” (“Only Exit” in English),and they decided that although it is not perfect, it worked better than the original translation. I followed this same process with a number of funny photos. The last step of this activity was asking them to come up with their own, correct translation for each less-than-perfect one. I have to say that they did a fabulous job. At first they made the common mistake of translating too literally, but they quickly got the hang of it. I think they were pleasantly surprised that they, 13-year-old English-language learners, could write better in English than the all-powerful Google.

The second activity was what brought about the winning photo. This class had a particularly large number of immigrant students from around the world and I had each of them translate “My name is…” into their native language on a colorful, comic-book-style speech bubble. In the photo you can see Russian, Arabic, French, Romanian, Spanish, Asturian (the local dialect), and English (that would be me). I had all the kids pose and hold their speech bubble up to their mouth, making for a happy and bright picture. The most rewarding part was that there were three students who didn’t know how to write in their mother tongue. That night, they asked their parents how to write out the sentence and were excited to show off their native languages in class the next day. One boy even brought in the entire Arabic alphabet copied by hand and spent the next school day writing all his friend’s names from right to left. Everyone was impressed, he was proud, and I was so happy to see it.

The culmination of it all happened right as I was walking out the door. One student came up to me, tapped me on the shoulder, and confessed: “Molly, I’m definitely going to think about becoming a translator.” Success!

Why participate in the School Outreach Program and Contest?

Let’s be honest: lotsof kids dislike their language classes, and I think it’s because they think they’re useless. Kids don’t see or hear much about other languages in their daily lives, especially in America. Making an entertaining, interactive presentation where they can see the consequences of mistranslations, a possible career for their future, and the fun in it all, is extremely rewarding. Through this program, we can change the way they think about language and make them see that it isn’t just another subject in school — that language is a powerful tool that is becoming more and more important every day.

The other benefit to participating is monetary. If you win the photography contest, you get a free registration to next year’s conference! Not only that, but it really gets your name out there and you get to meet a lot of great people along the way. From my point of view, it’s all benefits. I even had the nice surprise of having my photo on the cover of The Chronicle.

I had such a great experience that I decided to repeat my presentation when I was home in Minnesota for a visit this winter. I talked with a classroom of adult ESL students in the Adult Academic Program in my local school district. 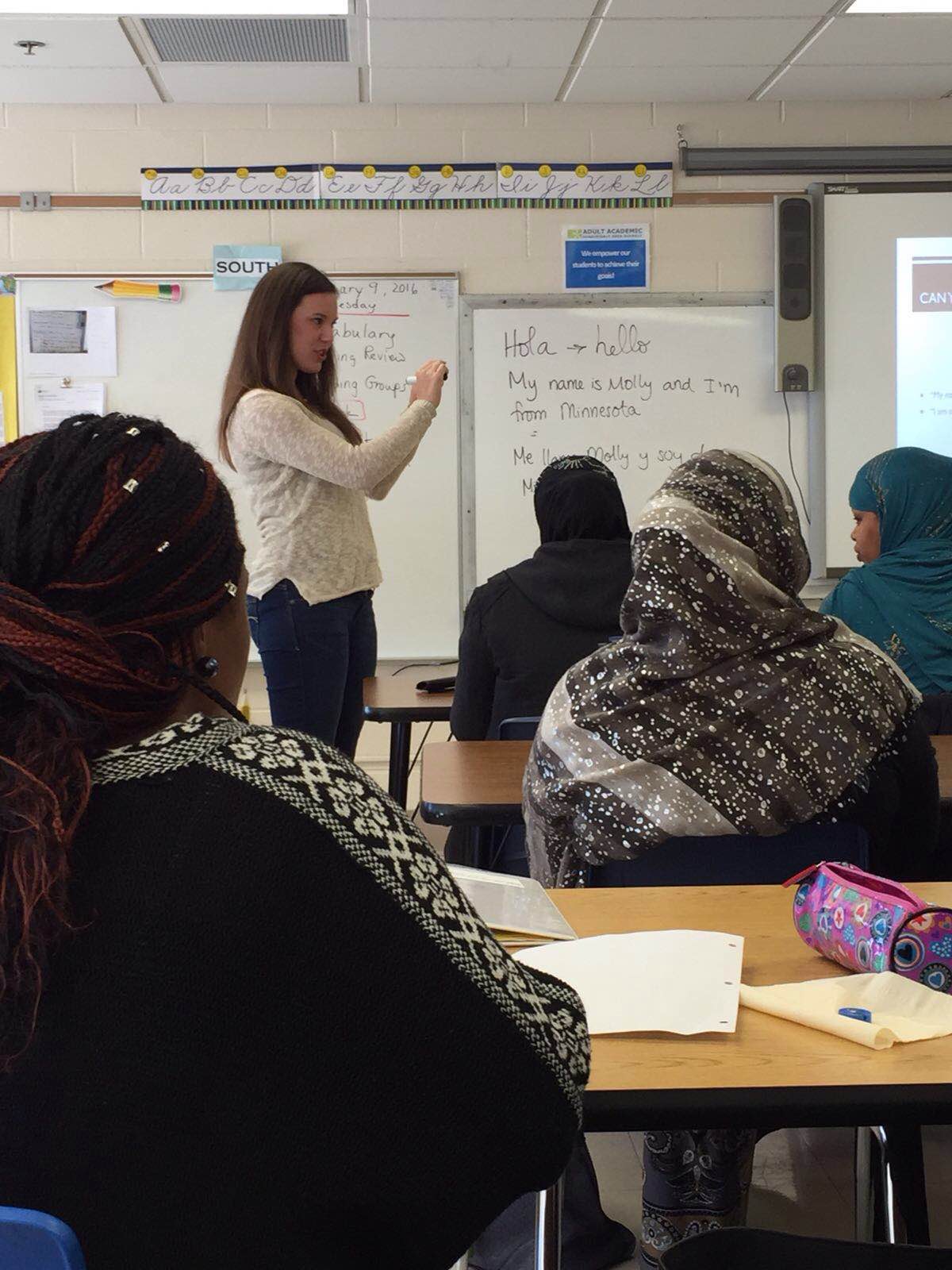 The experience was an absolute blast! The classroom was filled with immigrants and refugees from all over the world and they were so interactive and excited to have me there. They were mostly surprised to learn the difference between translation/interpreting and asked tons of questions (How much can you make? What if you make a big mistake? How can we study? Who can we work for?). At the end, I opened it up for discussion and many of the students told me stories about their bad experiences with interpreters. One man shared that he volunteered when he was at the doctor’s office and could see there were Spanish-speaking patients waiting for their interpreter, who never showed up. He said he volunteered for five hours to help people communicate with their doctor. Throughout the presentation, I encouraged all of them to continue with their English studies to work towards a career in interpreting. You should have seen their faces! I think that for many immigrants and refugees, a “real job” seems out of reach. They looked so entirely hopeful that they could make a career for themselves in this field while helping their fellow community members at the same time.

I encourage you to educate others about our great field by participating in the School Outreach Program. Whether you visit a classroom of children or adults, you will quickly see how rewarding the experience can be. If you’re interested in participating in the photography contest, you must submit a photo and description of your presentation by the deadline on July 18, 2016.

Molly Yurick is a Spanish to English translator specialized in the tourism, hospitality and airline industries. In the past she has worked as a medical interpreter in Minnesota and as a cultural ambassador for the Ministry of Education in Spain. She has a B.A. in Spanish and Global Studies and a Certificate in Medical Interpreting from the University of Minnesota. She is currently living in northern Spain. You can visit her website at: http://yuricktranslations.com/