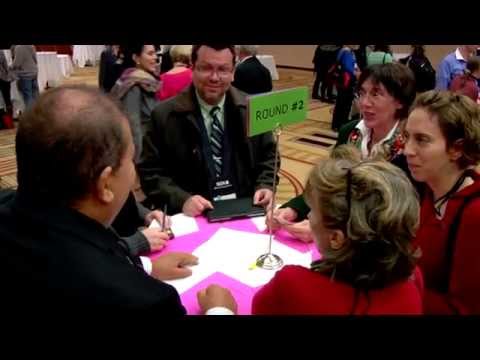 It has been more than a year since I acted on a very unlikely hunch and reserved a room at the 2014 ATA Conference hotel in Chicago.

On the face of it, it did not make a lot of sense. Almost two years into my career as a freelance translator, which I was still doing on the side of my regular job as a journalist, things were not going as well as I had hoped. And I live in Buenos Aires, so going all the way to the United States for a conference my translation business could not really support sounded wacky at best. But I decided I could postpone any final decisions and just make sure that, if I were to go to Chicago after all, I would have a room at the conference hotel.

A few months later, my ATA mentor at the time strongly encouraged me to attend the conference. By then, I had done all the maths: the plane trip was going to set me back about 1,100 dollars, accommodation would amount to about the same, and I still had to add in the conference registration fee, division dinners and any expenses in Chicago. It sounded absolutely crazy, and I told my mentor just that.

He insisted, however. He clearly thought it was worth it, even at that cost. That left me thinking, and by the end of August I had bought my plane ticket.

I did not really know what to expect. I was relatively new to the profession, and since I had not studied translation I knew virtually no one in the industry, even in Argentina. As the conference grew closer, I realised that I was obsessing about how much I had invested, and about whether five days in Chicago could ever justify spending 3,000 dollars. In particular, since I intended to make a living as a translator, would I get any actual clients out of the venture?

Fortunately, I changed my attitude in time. When I got on the plane to Chicago I was determined to just make the most of it, whatever “it” might turn out to be. Enjoying myself, meeting interesting people, and doing all I could to return to Buenos Aires with a sense that I had grown professionally were much more realistic goals than finding 2-3 clients to pick up my conference tab.

To cut a five-day story short, it was a fantastic experience.

It was not all easy, of course. I am fairly sociable once I am “accepted” into a group, but I am awful when it comes to introducing myself to strangers and making conversation out of the blue. So I started the conference quite slowly and had dinner alone a couple of times. Once, a thoughtful translator actually told me off for standing on my own, two yards away from a large group. I was supposed to introduce myself, she said; that was surely why I was in Chicago, after all. She introduced me to a couple of people around, but they were busy talking and I was soon standing on my own again. Mmm…why was I in Chicago?

And yet my luck changed just a few minutes after that. On the way to a division dinner, I started to talk to the man who happened to be walking next to me. When he said his name, I knew who he was from an ATA listserv, so I was impressed. And the longish walk became an opportunity to chat, which led to the opportunity to sit with him and other conference veterans at the restaurant, which led to an after-dinner beer with them back at the hotel, and another beer the following day. Soon, I was finding the odd friendly face in the lobby, during a session or at breakfast. Suddenly, I had developed the confidence to talk to strangers more naturally. Before I knew it, I had, probably for the first time ever, the feeling that I belonged in the translator community. Yes, that was exactly why I was in Chicago.

The sessions were mostly great too, by the way, but I could have found interesting webinars from afar. What made the trip necessary was the people I met, and they were worth it, hands down.

I might as well have bought my plane ticket to the 2015 conference the moment I landed in Buenos Aires. In Chicago, I had fun, learned a lot, and got to feel part of exactly the crowd I want to be a part of professionally. The conference became the confidence booster I needed to feel like a real translator. So I was both extremely glad to have made the investment and determined to do it again a year later.

Of course, I got back home without a single new client. The fact that I did not really measure the event in those terms anymore does not mean that I did not spend a few days on follow-up. But I stuck to my priorities and sent thank you notes first to the people who had made the experience so enjoyable. Then I wrote to a speaker that I thought was particularly good. And only after that did I write to 7-8 agencies.

Only a couple of them wrote back, although those included the one I would have considered my favourite. It was the usual thing: I filled out the forms everyone sent me, someone said my rates were too high, etc. The agency I really wanted to work with did not write back after that initial contact, but I remembered what I had heard at the conference and, in early February, I wrote to them again. Perhaps I had gotten lost in the post-conference hustle and bustle, so it seemed worth another try, to remind them I was available. Within two days, I got a phone call and a job, and I have worked with them on many other projects since then.

It looks like my trip to Chicago will pay for itself after all. The funny thing is, however, that after seriously stressing over it for weeks almost a year ago, I no longer really care. Growth is always more important than money. As great as my new client is, what I will always treasure is the fact that my first ATA conference experience brought me closer to the professional I want to be. See you in Miami!

———————-
About the author: Veronica Sardon is a Spanish journalist-turned-translator who has been living in Buenos Aires for close to 15 years. Before that, she spent seven years in Britain and one year in France. She has a BA in Philosophy, Politics and Economics and a Master’s degree in Journalism, as well as the DipTrans in both EN>ES and ES>EN. As a translator, she specializes in international development, business, and the social sciences. You can learn more about Veronica on her website and blog and on Twitter as @wordassets.