November 24, 2020 | The Savvy Newcomer | No Comments | Specializations, Starting Your Career

This post originally appeared on Capital Translations and it is republished with permission.

Unless you have studied Law, it is rather tricky to know how to specialise in legal translation, let alone find relevant high-calibre training. Fortunately, Roehampton University’s symposium on Friday 9th January 2015 on becoming a legal translator addressed many of the issues concerning the best ways to acquire the wealth of knowledge and skills that are vital for this crucial sector of the industry. Here are some concise ideas from the programme highlights for those seeking to enter the specialism.

Professionalising legal translation – do or die

The conference took place on a bright and crisp winter day, with the first seminar by Juliette Scott. Although the title of her talk might have been a tad dramatic, Juliette quite rightly highlighted the problem that legal translation is not viewed as a profession compared with an airline pilot or doctor, for example, based on criteria including public recognition, monopoly over work and a regulatory body, all of which are lacking in this case; threats to the occupation were identified, such as machine translation, press coverage and translators themselves.

The decisive role of academia was brought up, in particular the fact that academics can contribute to improving practice, developing innovations, transmitting knowledge and providing theoretical and professional training.

Juliette’s seminar was not short of polemic questions: how do we regulate legal translation? Should CPD be mandatory and who would oversee it? But the presentation provided clarity over many aspects, namely that the best legal translators are lawyers who have become linguists or linguists who have gone on to study law. Regardless of one’s exact career path, legal translators are themselves responsible for making their profession a profession, one of Juliette’s recurring point being it is ‘us not them’. Specifically, we need to be outward-looking and be mindful of how we dress, how we position ourselves, how our workplace is arranged and how our websites and marketing materials come across.

The reflective translator: planning and implementing a CPD programme for legal translation

If there was one seminar that delegates could come away from thinking ‘okay, now I know what I need to do to become a legal translator’, Karen Stokes was the one to provide it.

Starting by discussing the CPD cycle (right), Karen highlighted the prime resources for translators to utilise in their quest to specialise in legal translation, the first ports of call comprising the likes of Coursera, Open University OpenLearn and FutureLearn, with examples of more specialised sources being the Law Society Gazette, the Institute of Advance Legal Studies and Lexoligy.

Naturally, professional bodies often run specialised legal courses in association with solicitors or lawyer-linguists and it is always worth remembering to check those professional bodies in the countries of your source languages, such as the BDÜ for German.

A resource raised by a delegate was Counsel, the monthly Journal of the Bar of England and Wales. Largely written by and for barristers, the magazine is to solicitors what the ITI Bulletin is to translators, featuring items of relevance to all those with an interest in the law.

How functional can/should legal translation be?

Legal translation is the “ultimate linguistic challenge […] combining the inventiveness of literary translation with the terminological precision of technical translation,” stated Łucja Biel of the University of Warsaw, opening with a quote from Harvey (2002), but it is nonetheless an ultimate intellectual reward.

Łucja’s workshop was a rollercoaster ride through the ups and downs, and ins and outs of the field. Firstly the challenges, which can be categorised as legal system-specific (e.g. incongruity of legal terms and difference between legal systems), language-specific (e.g. semantic differences between languages) and translation-specific (e.g. constraints of bilingual processing such as interference, simplification and explicitation). Thus, in the case of translation into or out of English, legal translation is often an operation between two languages as well as two legal systems (the judge-made common law in the England and Wales – which places importance on precedents – versus the code-made civil law on the European continent – which gives more weight to statutes), perhaps somewhat mitigated by the harmonisation of law within the European Union.

The debate of accuracy versus naturalness was broached, with delegates being introduced to clear references citing the importance of how accuracy should take precedence over style in legal translation, in other words substance over form.

The majority of legal translations are non-authoritative – merely informing about the content of the source text – but it is naturally vital for translators to know when a legal translation is intended to be authoritative, as such target texts are as equally authentic as source texts and vested with the force of law, as is the case in multilingual countries and organisations.

According to Šarčević, the ideal legal translator should have: thorough knowledge of legal terminology and legal reasoning between the source and target legal systems; the ability to solve legal problems, analyse legal texts and foresee text construal; and possess drafting skills and a basic knowledge of comparative law and methods. Alas such a translator does not, or at the very least is unlikely to, exist. Lifelong learning is therefore required.

In terms of qualifications for legal translators, in the absence of a law degree, the IoLET’s Diploma in Translation was cited as an ideal example given that candidates can sit a legal module.

Łucja proceeded to tackle some of the facets within legal translation that we need to consider, such as the wide usage of synonyms (‘par/nominal/face value, for example), the legal vs. semi-legal nature of terms, variation in terminology for civil and criminal procedure, geographical variations (UK vs. US law or even English and Welsh law vs. Scots law), terms and their collates (such as to bring an action and to file a lawsuit). Delegates were introduced to examples of set legal formula (e.g. in witness whereof), a corresponding formula of which most likely exists in the target language and should be sought.

A more curious aspect of legal language in English is repetitions, such as ‘by and between’, ‘terms and conditions’ and ‘any and all’; translators into English should therefore be aware of such phenomena and use them accordingly. Translators out of English, on the other hand, need to recognise these and more than likely simplify them in their target language, as continental systems avoid synonymy and a redundant translation would be confusing to a continental lawyer. Elements of navigation in legal English were also raised and legal translators should understand the importance and correct usage of terms such as ‘hereinafter’ and ‘thereof’.

A further fundamental aspect of style in legal language is dealing with disjunctive syntax and ordering semantic units logically. This primarily concerns matching prepositional phrases with the nouns and verbs to which they refer, such as ‘receipt of the Order by the Contractor’ being more logical than ‘receipt by the Contractor of the Order’, the latter sounding as if the Contractor belongs to the Order of the Phoenix from the Harry Potter books.

The seminar then dealt with strategies and techniques of legal translation, namely the question of equivalence: functional, descriptive or literal?

Functional equivalence is appropriate where two legal concepts are identical or similar between the two legal systems (such as ‘homicide’) and can be resolved with the approximation of a source term by the corresponding legal term. This is regarded as the ideal solution by many scholars owing to its communicative value.

Descriptive equivalence takes a legal term in the target languages and modifies it to clarify the difference, thereby bridging the knowledge gap. An example would be translating the German ‘Prokurist’ as an ‘authorised signatory’ or a ‘registered holder of power of attorney’.

Literal equivalence is, as the name suggests, a word-for-word translation, calque or a loan translation. This technique is deemed acceptable when the meaning is sufficiently transparent, it coincides with a functional equivalent and when it is not a false friend, such as the Polish ‘użytkowanie wieczyste’ being translated as ‘perpetual usufruct’, an English-language term typically used only by Polish lawyers to describe the Polish version of public ground lease.

Finally we looked at trends in legal translation, notably the fact that demand is expected to increase significantly on account of the mobility of EU citizens and the implementation of an EU directive on the right to translation and interpreting in criminal proceedings. This is coupled with the development of memories, such as the DGT Translation Memory and terminology databases, such as IATE and UNTERM. To put any fears to bed, Łucja asserted that legal translators are unlikely to be replaced by machine translation and post-editors soon, not least because of confidentiality issues and the lack of parallel corpora to train software.

Much like the conclusion to Juliette’s talk, Łucja provide some action points for translators to work towards to specialise law: build up knowledge of the source and target legal systems, terminology, phraseology and style.

Translation for the EU: making the impossible possible

In her overview of legal translation within the context of the European Union, Vilelmini Sosoni presented the either loved or more likely hated phenomenon of Eurospeak in bridging the gap between cultures and expressing new and pan-European concepts through neologisms (newly coined lexical units such as ‘flexicurity’ or existing lexical units that are bestowed a new sense such as ‘cohabitation’) and borrowings (introduction of words from one language to another such as ‘stagiaire’, ‘comitology’ and ‘third country’, all derived from French).

Once again, awareness of principles of concepts in common and civil law was emphasised, but also in this context thorough knowledge of the EU’s Institutions, decision-making and legal framework is required.

Delegates were introduced to the concept of intertextuality, that is the idea that most EU texts are recognised in terms of their dependence on other relevant texts, hence many texts will refer to other decisions, directives, and so on.

One revelation came when Vilelmini explained how EU legislation does not mention the term translation; rather translations are referred to as language versions owing to the principle of linguistic equality, whereby all official EU languages are equal or equally authentic.

Thoughts from the legal translator’s desk

Lawyer-linguist Richard Delaney rounded off the day by delivering some overarching ideas with delightful wit on, above all, client care – namely don’t treat clients like idiots and moan about them on Facebook groups, rather be helpful and go the extra mile – and setting rates – not competing on price in legal translation especially.

It would not be fair to claim that in 2015 the quantity of CPD courses and training for translators is poor, however we can challenge the quality of it. This full-day symposium on legal translation was one of the highest-quality and best-value-for-money (at £95) professional events that I have ever attended.

Packed full of practical and concrete information, and lacking the theoretical fluff that dominates many CPD events nowadays, I have come away from the conference having satisfied the two objectives that I intended to: understand the primary techniques of tackling legal translations and identify the resources for long-term training to specialise in legal translation, and then some. 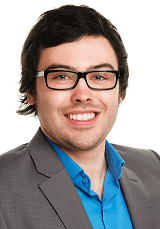 Lloyd has spoken at various conferences on professional standards in translation and is a tutor on ITI’s Starting Up as a Freelance Translator course.