ATA at Lenguas 2019 in Mexico City 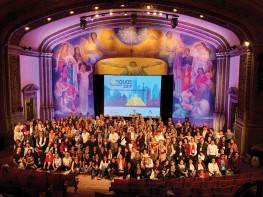 Attendees at Lenguas 2019 pose for a group photo. (Courtesy of Barry Slaughter Olsen)

In January, just as the U.S. was being hit by extremely low temperatures, I had the pleasure of heading to sunny Mexico City to represent ATA in my role as spokesperson at Lenguas, a biennial conference that “brings professional interpreters and translators under one roof to address topics such as best practices, market trends, and continuing education.”1 I had heard great things about the 2017 event and thought that traveling to Mexico would be a fantastic opportunity to work on developing closer ties with our colleagues and professional associations in Mexico. ATA was also one of the conference sponsors and had a table to display promotional materials, which I was more than happy to staff so I could answer questions regarding ATA in between sessions.

The Lenguas conferences are organized by InterpretAmerica and Mexico’s Italia Morayta Foundation. The Italia Morayta Foundation seeks, among other goals, to “promote the development and recognition of translation and interpreting in Mexico through meetings, research projects, and webinars.”2 InterpretAmerica was established to “help raise the profile of interpreting by providing an open and ongoing forum where key players from all branches of interpreting can gather and foster a greater connection among its many sectors.”3

I was eager to experience the fine conference these two organizations had put together, but first I was going to take advantage of another amazing opportunity to meet up with fellow colleagues.

The conference week began on a high note even before Lenguas 2019, as I had been invited to come spend a few hours at Colab,4 an intensive week-long workshop for professional conference interpreters, on the last day. Established by ATA member Laura Holcomb and Lauren Michaels, a member of the Ordre des traducteurs, terminologues et interprètes agréés du Québec, Colab offers complete “hands-on” training. Participants spend the majority of the day in actual interpreting booths conducting mock interpreting sessions. (For Colab Mexico, the booths were donated by Gonzalo Celorio Morayta, chief executive officer of CM Idiomas, which was one of the main sponsors for Lenguas 2019.5 Gonzalo is also the president of the Italia Morayta Foundation.)

It’s very much a collaborative environment, where everyone alternates between serving as the speaker to be interpreted and as the one doing the interpreting. Participants also offer feedback to each other. On the organization’s website, Laura and Lauren describe Colab as “our yearly training camp, where we can play with certain language combinations, subject domains, and modalities. It also serves as a chance to learn from our colleagues and challenge any fixed ideas of ourselves and our vocation.”

From what I experienced, Colab certainly accomplished its mission! It was great to be there to talk about ATA and discuss issues pertinent to interpreters before heading to Lenguas 2019. I also got a chance to provide some feedback to participants. My time at Colab definitely energized me and put me in the right mindset for the three-day conference ahead.

The first day of Lenguas 2019 took place at the Antiguo Colegio de San Ildefonso, a gorgeous historic location in Mexico City. A museum and cultural center, the Antiguo Colegio de San Ildefonso is considered to be the birthplace of the Mexican muralism movement. I remember visiting it as a child during a school trip (I grew up in Mexico City), but the venue is even more impressive now as an adult. The first plenary sessions took place on the main stage of this spectacular 16th-century building. The stage features a mural by Diego Rivera as a backdrop, so it doesn’t get much better than this in terms of settings!

Since 2019 is the United Nations’ Year of Indigenous Languages, it was very fitting that Lenguas 2019 had a strong focus on indigenous languages. Through sponsorship, the conference organizers were able to provide scholarships to dozens of interpreters and translators of indigenous languages. I was able to talk to many of the recipients and have to admit that I hadn’t heard of some of the languages they interpret. It was quite a learning experience! As Mexico and the rest of the interpreting world works on the training and professionalization of interpreting for these key languages, I look forward to learning more and contributing in any way I can. 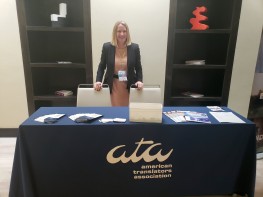 The plenary sessions were diverse and fascinating, with my vote for favorite talk being a toss-up between the funny and engaging remarks about Spanish linguistic purity by Concepción Company (researcher emeritus at the Philological Research Institute, Universidad Nacional Autónoma de México), and author Michael Erard’s discussion with InterpretAmerica’s Co-President Barry Slaughter Olsen about Erard’s work and research, most notably his book on hyperpolyglots, Babel No More.6

I was also able to share lunch with Michael Erard and a number of colleagues, including two former students and now ATA members, Aída Carrazco and Kenia Núñez, at nearby Azul Histórico. (Talk about full circle!) Later in the day, representatives of major translator and interpreter associations took the stage for an insightful roundtable on the future of the industry. I always enjoy hearing from Kevin Quirk, president of the International Federation of Translators, and found it fantastic that Allison Ferch, executive director of the Globalization and Localization Association, was able to participate via the remote online interpreting software platform Voiceboxer.7 In between sessions, there were many interesting conversations in the beautiful main hallway, and I was able to tell attendees to stop by the ATA table during the following two days, when the event moved to the nearby conference hotel.

Two more powerful plenary sessions stand out in my mind. One was a roundtable focused on interpreting in crisis situations, which included my esteemed colleague and fellow ATA member Julie Burns, that was moderated (in Spanish) by ATA member Katharine Allen, co-president of InterpretAmerica. The other notable session was the keynote by Chilean poet and political activist María Teresa Panchillo, which shed light on the intricacies of her language, Mapuche (also known as Mapudungun). María also included a brief reading of one of her poems.

Another highlight was that the conference sessions were interpreted into several languages by a team of top-notch interpreters, and my hat goes off to them. I spent quite a bit of time pondering and talking with others about how I would have interpreted examples of Mexican grammar and spelling into English (my conclusion was that it would have been very challenging).

Another highlight of Lenguas 2019 was the presentation of the Italia Morayta Foundation’s Italia Morayta Awards for translation and interpreting in several categories (community interpreters, conference interpreters, research work, and translators). The awards are named for Italia Morayta, who became Mexico’s first professional simultaneous interpreter during the second general conference of the United Nations Educational, Scientific and Cultural Organization, held in Mexico City in 1947. Morayta went on to forge a career as an official interpreter for Mexican presidents from 1946 to 2000. She fought to achieve professional recognition for the work of interpreters and translators, for their working conditions, and for training new generations.8

This year, the awards went to the following recipients: 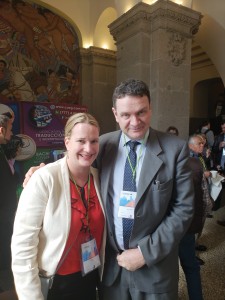 Judy Jenner with Kevin Quirk, president of the International Federation of Translators.

The following two days were jam-packed. I met with representatives of several Mexican associations, spent time staffing our ATA table, and got a chance to attend sessions. My favorite was Aline Casanova’s session on deliberate interpreting practice. I’ve been a fan of her new online project, InterpretimeBank (an online community for interpreters to practice), so it was fantastic to meet Aline in person and delve into her work.10

I received many intelligent questions about ATA and our role in the industry while talking to fellow attendees, which I compiled into a report for ATA’s Board of Directors. In general, I think there are many great things we could accomplish by working together with our fellow associations in Mexico—there were ideas aplenty. I met with Patrick Weill, an ATA-certified Spanish>English translator and president of the COTIP, Asociación de Traductores e Intérpretes de México. Among many others, I also met with Mónica Ibarra, president of the Mexican Association of Conference Interpreters (Colegio Mexicano de Intérpretes de Conferencias), who told me the fascinating story of the development of interpreting in Mexico, which I hadn’t heard before. Another interesting meeting included several representatives of the International Association of Conference Interpreters.

Overall, I was very impressed with the high level of quality the organizers of Lenguas 2019 were able to deliver attendees. It was the first event I attended that gave such a high profile to indigenous languages, an effort I applaud. I learned a lot, met plenty of new colleagues, and talked about ATA so much I needed lozenges the last day—and it was so worth it. It was an honor to represent ATA and I look forward to doing it again soon. Many thanks to the conference organizing committee, including InterpretAmerica’s co-presidents Katharine Allen and Barry Slaughter Olsen, and Gonzalo Celorio, president of the Italia Morayta Foundation, for their support.

Gonzalo’s foundation sponsored a study on the Mexican translation and interpreting market, which was partially published on the pages of this magazine last year.11 The author was Laura Holcomb, one of the co-organizers of Colab Mexico, who also attended Lenguas 2019.

Learn More about the Organizations Mentioned

Judy Jenner is a Spanish and German business and legal translator and a federally and state-certified (California, Nevada) Spanish court interpreter. She has an MBA in marketing and runs her boutique translation and interpreting business, Twin Translations, with her twin sister Dagmar. She was born in Austria and grew up in Mexico City. A former in-house translation department manager, she is a past president of the Nevada Interpreters and Translators Association. She writes the blog Translation Times and is a frequent conference speaker. She is the co-author of The Entrepreneurial Linguist: The Business-School Approach to Freelance Translation. Contact: judy.jenner@twintranslations.com.