ATA at "Protect Translators and Interpreters, Protect the World": A Roundtable at the United Nations

Advocacy & Outreach
By The ATA Chronicle

On April 10, 2018, the Permanent Mission of the Republic of Belarus to the United Nations hosted “Protect Translators and Interpreters, Protect the World” at the United Nations Headquarters in New York City. The purpose of this roundtable discussion was to address the need for greater legal and physical protection for translators and interpreters in situations of armed conflict and post-conflict peace-building. The event was organized in cooperation with a language coalition comprised of Red T, a nonprofit advocacy organization, and five major international language associations (Critical Link International, International Association of Conference Interpreters, International Association of Professional Translators and Interpreters, International Federation of Translators, and World Association of Sign Language Interpreters). Red T is dedicated to the protection of translators and interpreters in conflict zones and other adversarial settings. Led by a team of volunteers, Red T advocates worldwide on behalf of linguists at risk, raises awareness of the dangers they face, and promotes their safety.1 The organization invited ATA to send a representative to this event, and I was honored to be chosen to attend.

Working Toward Recognition and Protection

In addition to discussing steps for mitigating risks and vulnerabilities, the panel also focused on what can be done to help translators and interpreters in conflict zones gain the international recognition and protection they deserve. The impressive list of speakers on the program included: 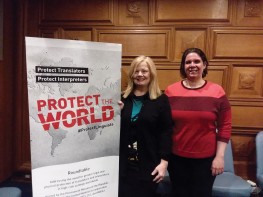 This roundtable grew out of then-Ambassador Dapkiunas’ statement at the UN Security Council on May 25, 2017, in which he urged member states “to initiate the elaboration of an international instrument that would enhance the legal protection of translators and interpreters in situations of armed conflict and in the situation of post-conflict peace-building.”2

Minister Dapkiunas also spearheaded UN Resolution 71/288, which recognizes the contribution of language professionals to the maintenance of peace and security and the promotion of human rights as they assist militaries and humanitarian organizations, ensure due process, and facilitate international negotiations.3 Incidentally, Minister Dapkiunas and Ambassador Rybakov both trained as interpreters in Minsk before entering the diplomatic service, which is why the #ProtectLinguists issue is so close to their hearts.

The speakers touched on different aspects of the problem of linguists in high-risk settings, specifically in Iraq and Afghanistan. Maya Hess pointed out that linguists in armed conflict and post-conflict peace-building settings may not only be indirect victims by virtue of their proximity to warfare, but also direct victims as a function of the translator-traitor mentality. She emphasized that despite this double exposure, linguists in conflict zones lack the specific protection under international law that is extended to journalists and medical personnel. 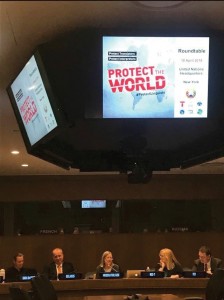 Linda Fitchett went on to explain that the problem becomes even more acute after forces withdraw from these countries and insurgents have free rein to hunt these “collaborators” down. She cited case histories and casualty statistics, including the nine-year-old nephew of an interpreter in Afghanistan who was executed because his uncle worked for the U.S. military,4 as well as instances where the Taliban cut out the tongues of interpreters prior to beheading them.

Betsy Fisher, whose organization represents refugees at all stages of the resettlement process, expanded on the dangers for linguists in combat situations, adding that they are not provided with body armor or safety equipment, and that there is no internationally recognized symbol like that of the Red Cross or the Red Crescent that would identify them as non-combatants (which is the basic idea behind the Red T symbol). Fisher also spoke about how linguists and their families are frequently denied resettlement visas for arbitrary reasons and sometimes spend years fighting to find safety in another country.

Kevin Quirk addressed the murky area of contract linguists working for private companies in Iraq and Afghanistan. Unlike linguists who work directly for the military or a government agency, contract linguists are separated from the states for which they are working indirectly by several degrees, making it even more difficult for them to obtain protection and resettlement assistance from these states.

Finally, Sara de Jong shared some of her research findings, among them the fact that there is no international coordinated resettlement program or harmonization among states that are involved in one collective mission. The challenges linguists face in relation to their protection and resettlement can cause tensions to arise between people’s sense of belonging to a country, societal recognition of that belonging, and legal status and access to social rights.5

Aside from the official panelists, participants also heard from Marcus Grotian, a German soldier who was on active duty in Afghanistan. Grotian chairs the Patenschaftsnetzwerk Afghanische Ortskräfte, an organization that supports Afghan staff that resettled in Germany.

What Can Be Done to Improve the Situation?

A discussion ensued on how to legally enshrine states’ obligations with respect to basic protections for linguists. Hess noted that while the nature of any such legal text remains undecided at this time, it could take the form of an international measure, along the lines of the resolutions adopted for journalists or an amendment to the Geneva Conventions. The panelists agreed that they have a long road ahead in the UN because member states that use linguists recruited from local communities may be hesitant to back such mechanisms. However, there are concrete steps that could be taken on the ground in the meantime. For instance, Fisher encouraged member states to take a more active role by providing on-base housing, respecting the right of linguists to remain anonymous, assisting with relocation, and maintaining accurate records. Hess sought greater professionalism on the part of conflict zone linguists and their employers through improved training by, for example, consulting the international coalition’s Civilian Translators/Interpreters and Users of Their Services, which is available on the websites of Red T, AIIC, and FIT.6

Finally, Ravi Batri, a lawyer in the audience, challenged everyone in the room to take their efforts even further. While maintaining that the relocation of linguists and their families is part of the cost of war, he argued that translators and interpreters should not be compared to journalists, and that they are entitled to complete protection and diplomatic inviolability.

Participants came away from this roundtable energized by new ideas and convinced of their moral imperative to help these linguists.

(Special thanks to Maya Hess for reviewing a draft of this article.)

Lucy Gunderson is an ATA-certified Russian>English translator specializing in human rights, legal documents, and academic translation. She is also chair of ATA’s Divisions Committee and a former administrator of the Slavic Languages Division. Contact: lucy@russophiletranslations.com.