The sun has been shining on ATA for a few years now, financially speaking, allowing us to make quite a bit of hay. Our unaudited figures1 for the most recent fiscal year (2018–2019), which ended in July, however, indicate that cloudy weather is on the horizon. Membership is stagnant and has even declined a bit. Conference attendance has been trending lower and isn’t expected to improve this year. At the same time, baseline expenses have either remained unchanged or continued to rise, which we need to address through budgeting.

It’s not all bad news, though.

Overall, ATA’s financial situation remains sound. We’ve taken advantage of the positive results from the past five years to provide a cushion for just this type of situation. Surplus funds have been prudently managed and invested so that we have money available for rainy days.

The upshot is that we don’t need to panic, but we do need to be vigilant and aware of our financial reality moving forward, especially when making decisions that affect the budget.

For comparison’s sake, a year ago our net assets grew by $290,070, mostly because the conference in Washington, DC made more money than the one in New Orleans.

Year-on-year, things are likewise moving in the wrong direction (see table above). Total revenue dropped (-6.6%) from $3.28 million to $3.07 million, while total expenses continued to rise (+8%) from $2.99 million up to $3.24 million. The main culprit on the expense side was Supporting Services (i.e., our overhead).

In terms of ATA’s main revenue streams, Membership ($1.85 million) was down (-2.5%) from a year ago, while the Conference ($826,829) in New Orleans brought in substantially less money (-20.2%) than the one in DC. In a distant third place, Certification revenue ($284,235) was actually a bright spot, up 12% from 2018. This increase resulted from a combination of more test-takers sitting for the exam before the testing fee rose on January 1, 2019, and the higher fee now in place during the second half of the fiscal year.

A few other noteworthy items in the revenue department include:

Figure 1: Breakdown of Total Revenue for FY2018–19: ATA has two main sources of revenue—Membership Dues and the Annual Conference—which accounted for 87% of incoming funds this fiscal year. The Certification Program provides a third, much-smaller stream, at just 9% of total revenue. 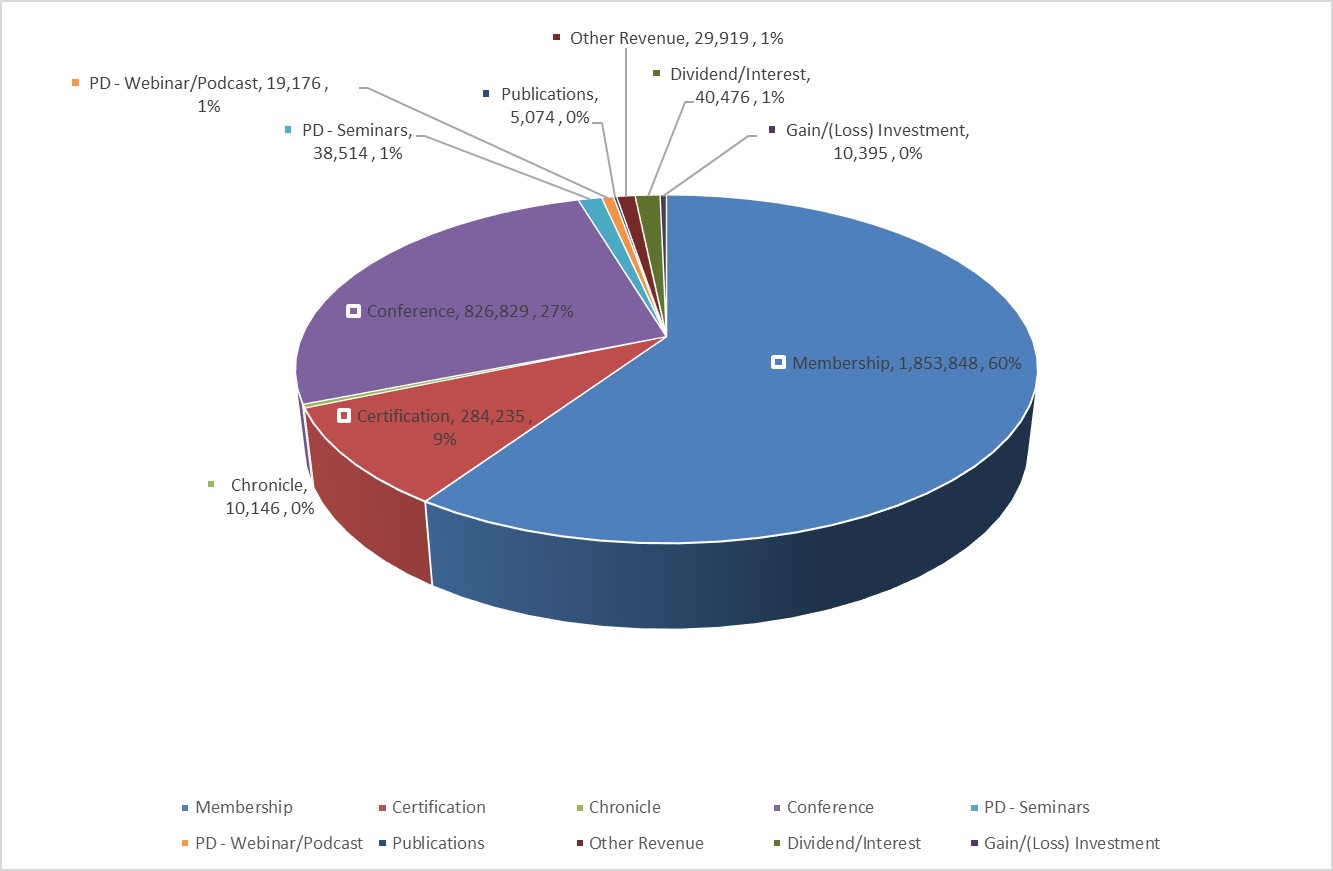 Figure 2: Breakdown of Total Expenses for FY2018–19: Our budget includes a wide array of expenses. Most of ATA’s money (73% of the total) gets spent on programs, administration, and membership services, while the Annual Conference (27%) is our single biggest program expense. 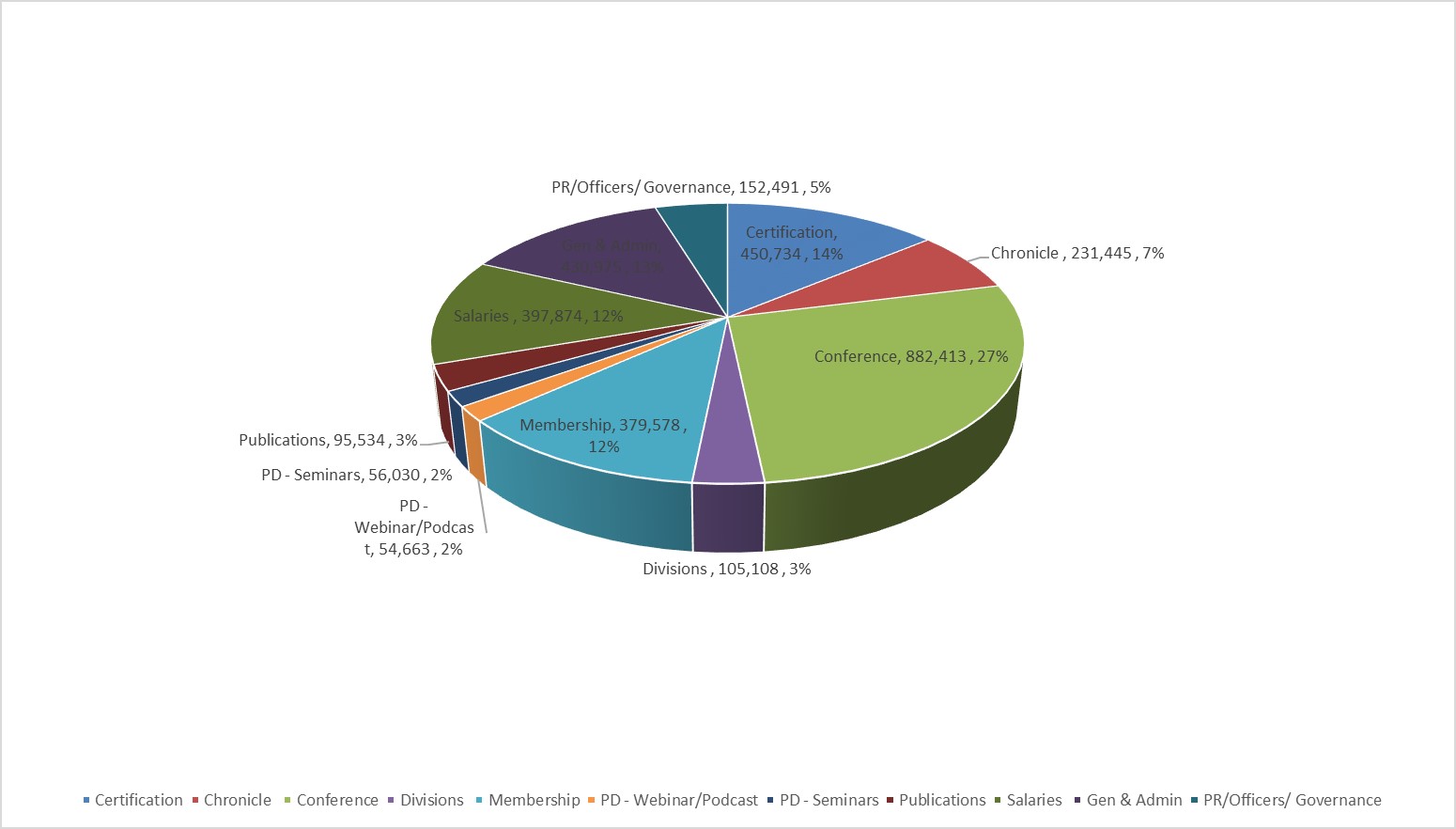 ATA’s single largest outlay this fiscal year was Supporting Services (i.e., salaries, administration, officers, volunteers), at $981,339, up 28.8% from a year ago. Much of this increase came from General/Administrative expenses, including $81k in website redesign, $42k in programming costs, and $12k in IT security. In addition, fewer staff hours were allocated to program services, resulting in a big jump (48%) in overhead Salaries/Benefits. Public Relations/Marketing expenses were also higher, in part through efforts such as attending the New York Book Fair. Spending on Volunteers/Governance, though, was actually down (-45%).

The Annual Conference, normally our biggest expense, cost considerably less than a year ago, at $882,413 (-14.2%). A less-expensive event is one of the pluses of smaller-city venues. However, they also tend to bring in less revenue, as was the case in New Orleans, which negates the lower cost.

After that, our next three expense categories were: Certification ($450,734), Membership Services ($379,578), and The ATA Chronicle ($231,445). The most significant increase was in the Certification Program, where expenses were up 16.4%, with exam grading costs rising by 58%. Membership Services were also 39% higher year-on-year with the roll-out of new marketing efforts aimed at trying to bring in more members.

ATA funds a variety of programs, some of which generate income that helps defray their costs. Most, however, are funded through membership dues.

When the Annual Conference has been held in major metropolitan areas, it has not only tended to pay for itself, but also contributed to ATA’s bottom line. However, the 2018 conference in New Orleans and last year’s conference Palm Springs were smaller affairs. So, while they have covered their direct costs, they haven’t produced surpluses to help offset the overhead needed to organize them.

Likewise, Certification and Professional Development generate a bit of revenue, which ends up covering some of their respective costs. Other programs, though, such as Divisions, The ATA Chronicle, and Publications, are essentially just membership benefits, which means that they don’t produce a significant amount of income.

Our programs’ financial results for FY2018–2019 are presented in the bar chart in Figure 3 below. The yellow-colored section in the bars represents the gain or loss for each program. To understand the chart, look at the Certification Program on the far left. It brought in $284,235 in revenue, incurred $450,734 in expenses, and thus ended the year at –$166,499. This difference has to be subsidized by membership dues. On the other hand, the Conference nearly broke even, generating $826,829 in revenue versus $882,413 in expenses, resulting in a small loss.

In terms of ATA’s longer-term status, it’s a bit of a mixed bag. For now, though, we remain on fairly solid financial ground.

The good news, though, is that what ATA holds in cash, investments, etc., is still worth much more than it owes to others. In fact, this difference, which on the Statement of Position is recorded as Net Assets, did decrease a bit, from $1.55 million a year ago to $1.43 million this year, but it’s still a healthy number for an association our size.

An important component of our sound situation comes from ATA’s Investments. As mentioned at the outset of this report, we have continued to sock money away during the good times to prepare for the uncertainty that lies ahead.

For instance, at this time a year ago, we had $1.07 million invested in equities and fixed income. Now, these conservatively managed funds are up to $1.27 million. We also have $1.13 million held in cash, which we have been able to draw on for improvements to the Association that include association management software at ATA Headquarters and a website upgrade and redesign. These instruments conform to ATA’s investment policy, which seeks to protect our capital. And we now have a strategic reserves policy in place to help the Board make decisions about when and how to use the funds at our disposal. Details of our investment allocation are presented in Figure 4 above.

As usual, there is not much to report on the Liabilities side of the ledger. Things tend to stay fairly constant from one fiscal year to the next. The biggest percentage change year-on-year this time around occurred in Short-term Payables, which dropped from $67,399 at this time in 2018, to $0 right now, because of payment timing issues. Payables are cleared out once checks are issued for payment, so this figure can vary quite a bit depending on the dates selected.

In any case, the takeaway with respect to ATA’s liabilities is that things are pretty much the same as they have been, and that is just fine.

Looking Ahead: ATA60 and 2020
The 2019 Annual Conference in Palm Springs was a departure from the model that ATA has followed in recent years. With the event in a smaller city, at a conference center rather than in a conference hotel, the expectation is that costs will be lower, but overall attendance is expected to be lower as well. Once we have the final numbers, we’ll see whether this model is financially feasible moving forward.

Around 1,350 people attended ATA59 in New Orleans in 2018, while nearly 1,800 people came to ATA58 in Washington, DC. For the conference in Palm Springs, we budgeted much more conservatively, expecting around 1,150 people to attend. Preliminary figures indicate that we have already exceeded that estimate, with attendance actually surpassing the 2018 conference in New Orleans.

Looking ahead, ATA finds itself in a comfortable financial position for now, but as an association, we are trending in the wrong direction. A number of challenges lie on the horizon. While the language services market as a whole is growing, technology continues to modify the role that translators and interpreters play in it. Consolidation among companies in the sector is affecting market dynamics, and price pressure for freelancers is very real. In addition, trade wars, Brexit, and other economic factors have increased uncertainty in the global economy. For all these reasons, continued, prudent, financial management is a must.

One of ATA’s financial goals is to ensure that we have sufficient funds on hand to cover at least six months of operating expenses. In addition, we need to be able to make improvements to the Association’s technology and overall structure in response to an evolving marketplace. Our decisions in recent years have put us in a favorable position to do so. 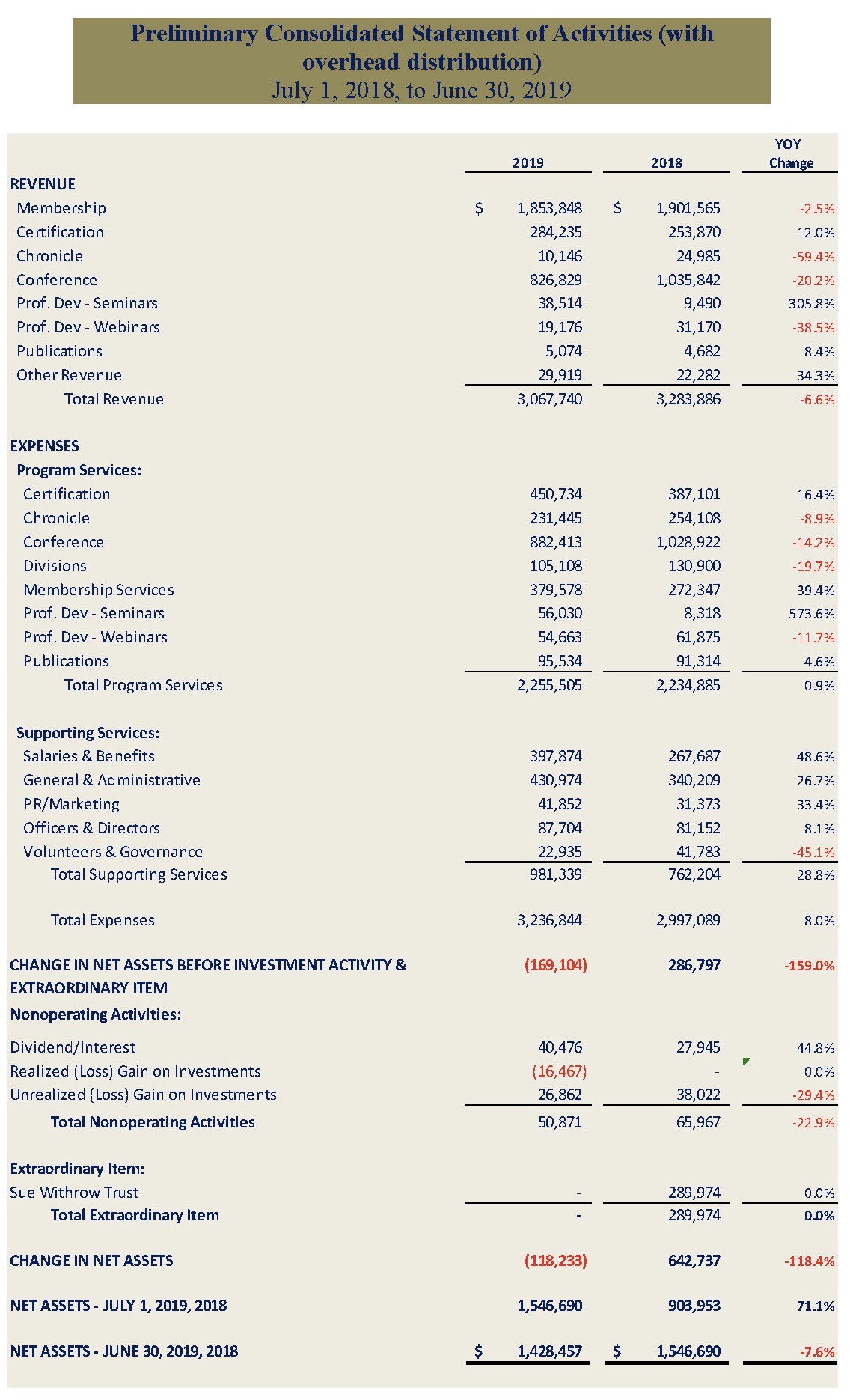 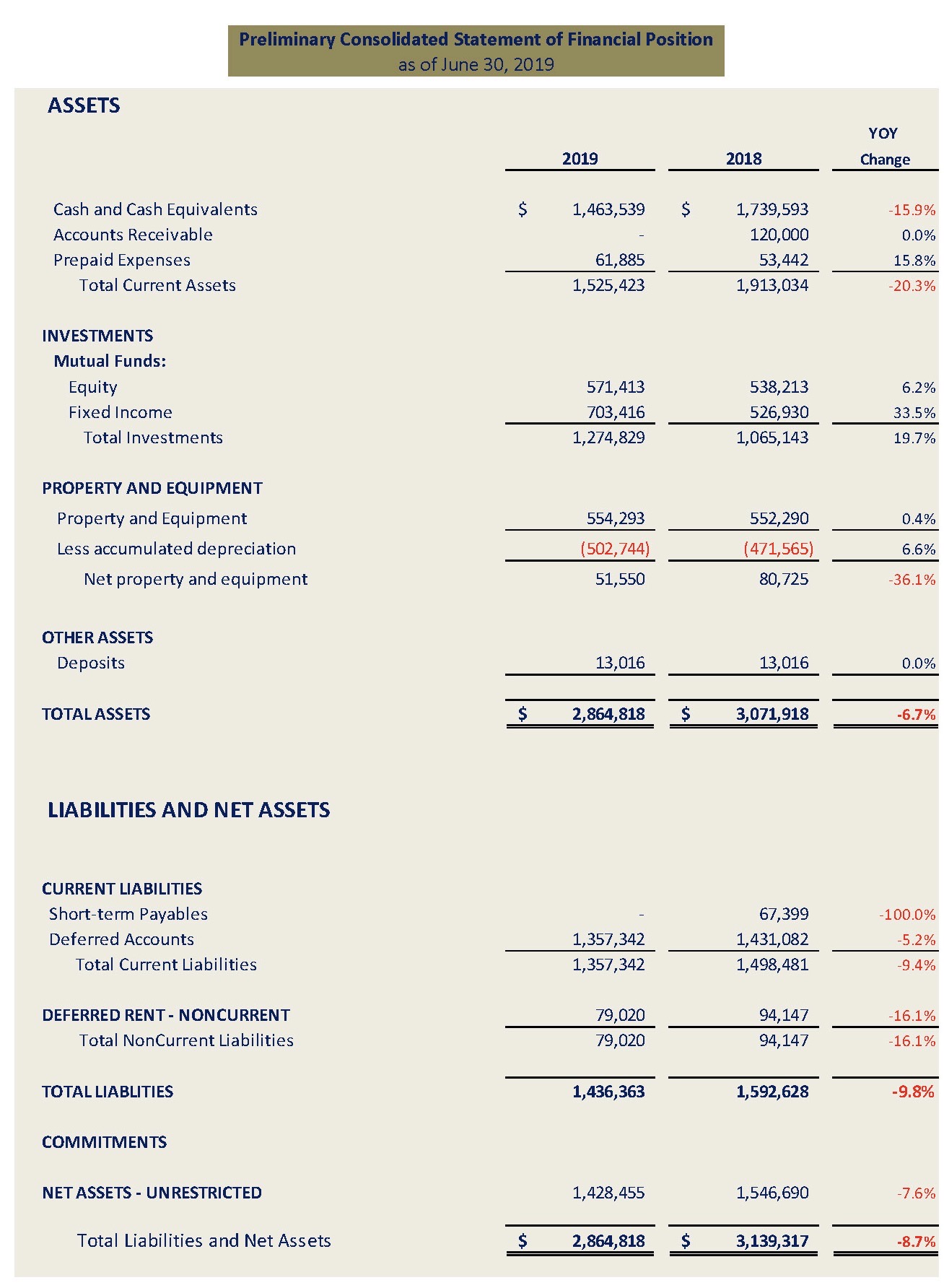