Namesake of the S. Edmund Berger Prize for Excellence in Scientific and Technical Translation
(November 13, 1922–December 13, 2020)

(The following is based on information provided by The Buffalo News and the United States Holocaust Memorial Museum.) 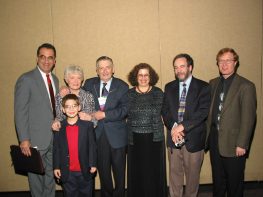 S. Edmund Berger (third from left) with his family at the 2002 ATA Annual Conference in Atlanta, Georgia, where it was announced that the S. Edmund Berger Prize for Excellence in Scientific and Technical Translation was being established in his honor.

S. Edmund Berger, a longtime ATA member and past recipient of the Association’s Alexander Gode Medal, died on December 13, 2020. The S. Edmund Berger Prize for Excellence in Scientific and Technical Translation1, awarded by ATA and the American Foundation for Translation and Interpretation (AFTI), is named in his honor.

Berger was born in Osijek, Yugoslavia (Croatia) in 1922. He received a doctorate in chemistry in 1946. A Holocaust survivor2, he emigrated to the U.S. in 1949. He worked as a researcher, first at Harvard Medical School (forensic chemistry) and then for a chemical corporation in Buffalo, New York. He focused on basic and applied research in areas such as polymers, food chemistry, surfactants, fluorocarbon solvent applications, and polyurethane coatings. He also worked as a freelance translator in the chemical and biomedical fields for over 50 years. Colleagues described him as a “quiet mentor and a superb role model who earned the respect of experienced and beginning translators alike.”

He joined ATA in 1961 and was an ATA-certified translator (French>English, German>English, and Italian>English). In 1999, he was awarded ATA’s Alexander Gode Medal, the Association’s most prestigious award presented to an individual or institution in recognition of outstanding service to the translation and interpreting professions. In 2002, his family established the S. Edmund Berger Prize for Excellence in Scientific and Technical Translation to recognize excellence in scientific and technical translation by an ATA member.

He was married to Benis Berger and the late Sultana Berger. He is survived by his children Ruth (Rob) Goldston, Daniel (Bethann Johnston) Berger, Steven (Mary Anne) Chernoff, and Debra (Larry Rubin) Chernoff, as well as nine grandchildren and five great-grandchildren.