ATA has done well over the past five to six years and been able to save and invest money for a rainy day. That rainy day is now here, and we’ll need to proceed cautiously to make sure that we keep the Association on solid footing.

This treasurer’s report is a departure from the norm. We’ll still review ATA’s finances for the first six months of the current fiscal year, but we’ll also look at how our financial situation might be impacted moving forward in light of the extraordinary circumstances created by the COVID-19 pandemic.

The good news is that ATA is starting from a strong position. We’ve done well over the past five to six years and been able to save and invest money for a rainy day. That rainy day is now here, and we’ll need to proceed cautiously to make sure that we keep the Association on solid footing.

We know from recent years that, given our current structure, as goes the Annual Conference, so goes the Association’s finances. When we have a successful event, the Association does well overall. When a conference breaks even or reports a loss, our bottom line takes a hit.

As such, ATA61 in Boston is front and center on everyone’s mind. There’s no easy solution here. We’ve had to consider all options, including the possibility of not having an in-person event. But every alternative comes with costs, some of which are easier to stomach than others. As things stand right now, the most palatable option appears to be a virtual event. I discuss the rationale and some of the potential costs/benefits in the Annual Conference section near the end of this report.

For now, though, let’s turn to our traditional review of where the Association stood prior to these impacts.

From July 1 to December 31, 2019, ATA brought in $1.99 million in Total Revenue, while incurring $1.76 million in Total Expenses. The upshot was a positive Change in Net Assets (before investment activities) of $231,050 during this period. (See Figure 1 below.)

For comparison’s sake, during this same time frame in 2018, our total revenue was a nearly identical $1.99 million, but the change in net assets only totaled $190,577, mostly because of higher costs incurred in the Certification Program as people rushed to take the exam before the price went up. 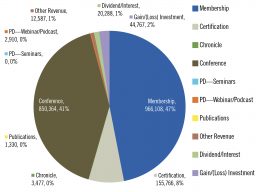 There was some positive news in terms of Total Expenses, which were down -2.5% year-on-year, to $1.76 million. The main reason was Certification, which experienced a substantial decline (-32.5%), from $241,180 to $162,811, as fewer people took the exam than at the end of 2018. The Palm Springs Conference remained our largest program expense, at $738,535, which is roughly the same as our event in New Orleans through that date. However, this expense will continue to grow as overhead gets allocated to it.

The main increase in expenditures through December 31, 2019, came from Supporting Services, at $432,917 (+7.0%), owing primarily to a $25,752 increase in General & Administrative expenses mostly related to our new AMS software.

Our programs’ financial results from July 1 to December 31, 2019, are presented in Figure 3 below. The takeaway from the chart is the yellow section of each individual bar. The size and location of the yellow sections demonstrates how big or small the gain or loss is for each program.

Before we discuss finances as they pertain to ATA61 in Boston, we should look at where we are with respect to last year’s event in Palm Springs (PS). Attendance in PS was slightly better than in New Orleans (NO). We brought in $850,364 in revenue, which is about $25,000 more than in NO ($825,151). Our hope, of course, was that Boston would be even better this year, so closer to conference revenue from Washington, DC ($1,035,842). But the reality is that even in the best-case scenario, this year’s event will be another small affair. That’s not good news for our bottom line.

In my last report, I noted that the PS conference covered its direct costs, which were around $650,000, but that once we factored in our Headquarters/overhead through the end of the fiscal year, it might break even or result in a loss. It now looks clear that it will result in a loss of about $90,000 to $100,000 after all overhead has been allocated.

There is no clear path forward for a traditional ATA61 Conference in Boston. Initially, we were unable to cancel the event outright because ATA was going to incur considerable costs, starting with contractual penalties from the venue, plus the significant portion of our staff/overhead whose cost is covered by net revenue from the conference. However, thanks to efforts at ATA Headquarters, we’ve been able to negotiate an alternative, where we reschedule Boston for 2025, in exchange for release from the contract now in place, without any penalties. At the time of this writing, the Board was strongly considering this option.

From a strictly financial standpoint, our least painful option seems to be a fully virtual event. Canceling ATA61 altogether would be financially damaging to the Association, given that the conference is our second most important source of revenue. As such, taking the unprecedented step of hosting a conference online will at least enable ATA to offer continuing education to people who may not have been able to afford to spend four days in Boston this year, or who had intended on keeping their distance for the time being. Of course, the virtual option is far from ideal. It misses out on those people who attend the conference primarily to network, meet prospective clients, catch up with friends, and enjoy time away from their workplace. But by hosting a virtual event, ATA will provide opportunities for professional development, continuing education, advanced training, division meetups, a job fair, and hopefully even some interaction with many of our traditional exhibitors.

We’re working on the details right now. The best that I can sum up, financially speaking, is that no matter what path we follow, we’ll likely be facing a loss, so the prudent thing is to minimize it as much as possible. A virtual ATA61 seems to be the right way to do so. 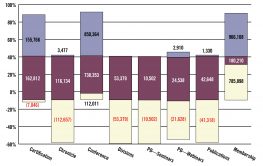 We’ll finish up this report by looking at ATA’s Consolidated Statement of Financial Position as of December 31, 2019. (See below.)

Overall, there was a slight drop (-2.5%) in Total Assets, from $3.28 million a year ago to $3.20 million at the end of December. This small change, however, masks some larger moves among assets that mostly offset one another.

At the same time, Total Liabilities continued to decline (-11.2%) from $1.58 million to $1.41 million. In ATA’s case, our Deferred Accounts line item represents membership services we owe to people who have joined the Association. So, when our Deferred Accounts are shrinking, we can interpret that to mean fewer members. As of December 2019, Deferred Accounts were down (-26.1%) to $1.10 million, from $1.49 million in 2018.

Given that both Total Assets and Total Liabilities shrunk by a similar dollar amount, ATA’s Net Assets (i.e., the difference between the two) declined only slightly (-2.5%) to $3.20 million, as of December 31, 2019, compared to $3.28 million a year before. 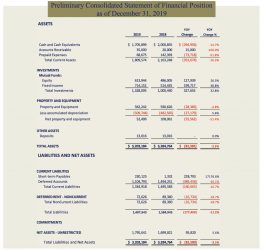 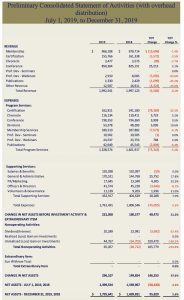 The figures reported above are from December 2019. Obviously, a lot has changed since then. However, they provide useful information on our starting position as this crisis unfolded.

At this point (April 2020), as a result of prudent management, ATA has savings and investments in excess of $2 million, with $1.1 million of that in cash, so it’s protected against the fluctuations of a highly volatile stock market. This is an enviable position. It means we have a financial cushion for the next six months as we determine how this crisis impacts our industry and ATA in particular.

We’ve also explored some Small Business Administration (SBA) economic relief options in case things continue in the wrong direction as a result of the economic lockdown. However, we haven’t submitted a formal application as of this writing.

Two trends that preceded the current crisis are expected to be exacerbated by it: declining membership and dwindling/negative net income from the conference. We’ll continue to monitor membership numbers. For now, we’re planning for at least a 5% drop year-on-year. The conference, for its part, as discussed earlier, will entail a loss.

We’re working hard on the budget, starting with three scenarios for revenue: best case, worst case, and most likely. Our best case is maintaining the status quo, with slight declines in revenue across the board and a manageable loss overall. The worst case involves a major drop in membership revenue coupled with canceling the conference outright, which now looks unlikely. In that situation, we would incur the largest one-year loss in ATA history. That leaves us with what we think will be the most likely outcome—somewhere in between.

In all three cases, ATA will face losses. Our most-likely scenario forecasts a negative change in net assets on the order of $400,000 for the upcoming fiscal year (2020-21). That would come on the heels of what’s shaping up to be a $300,000 loss this fiscal year (ending in June 2020). As such, many of the theoretical conversations that we’ve had in recent years about ways to streamline the Association, reduce overhead, and lower our expenses will need to become practical implementations. The decisions we make in the next three to six months will be crucial to ensuring ATA’s continued financial success.

John Milan, CT is the treasurer of ATA and chair of ATA’s Finance and Audit Committee and ATA’s Strategy Committee. He is also an ATA-certified Portuguese>English translator. He is an economist, writer, and lecturer on the business and economics of language services. He was an adjunct professor of economics in São Paulo, Brazil, for 10 years. He has been involved in the Carolina Association of Translators and Interpreters (an ATA chapter) since 2005, spending eight years on its board of directors, serving as president from 2013–2016. He has an MS in applied microeconomics from Ohio State University and degrees in international political economy and Spanish from Indiana University. Contact: john@milanlanguageservices.com.