This annual report reviews ATA’s performance during its most recent fiscal year, from July 2019 to June 2020. These results are reviewed by independent auditors, and any material adjustments will be addressed in future reports. To get a sense of how the Association is doing over time, we begin with headline figures from the past three fiscal years. (See the table below.)

Like every organization, ATA has been adapting to our new reality. Though many financial impacts have yet to be fully felt, the most significant one so far has been the decision to host a virtual conference. This was a major leap, with financial implications, given that this event normally accounts for about one-third of total revenue for the year.

ATA Headquarters staff and volunteers plan and work on this event year-round, in a structure that cannot be turned off and on. In fact, given the uncertainty in the first few months of the crisis, the Association was actually planning both an in-person and a virtual event, thereby requiring even more time and energy than normal.

Yet, a fully virtual conference has been held, and we dealt with a lot of unknowns. For instance, we didn’t have good data on how many people might attend, what they would be willing to pay, how much value members might place on a virtual event, or even what types of challenges (technical and otherwise) we would face throughout. As such, from a financial perspective, this conference was a learning experience, and if, after all the expenses have been recorded, it breaks even, we should consider it a success.

As mentioned in previous reports, there tends to be a lag between when an economic shock takes place and when its effects are generally experienced. This tendency is significant because ATA’s two most important sources of revenue (conference and membership dues) are clustered in the second half of the calendar year. As such, while our finances still look fairly solid in this report, it’s essential to bear in mind that rockier roads lie ahead.

Even though the Association’s bottom line was negative for the fiscal year, it actually improved year-on-year because certain expenses were kept in check by the pandemic and economic crisis.

The good news is that Total Expenses were also down -5.3% year-on-year. (See Figure 2) Program Services ($2.07 million) accounted for roughly two-thirds of all expenditures, after overhead allocations2, and were -7.9% lower than the previous fiscal year. Certification expenses ($305,531) were down -31% because fewer exams were offered and graded.

Supporting Services accounted for the next biggest outlay, at $967,046, which is essentially unchanged from a year before. These services include salaries/benefits, general/administrative expenses, Board meetings, etc. The only noteworthy increase in spending was on PR/Marketing (up 26%). This increase was the result of cooperation with the Coalition of Practicing Translators and Interpreters of California on legislation related to California Assembly Bill 5, as well as slightly higher PR consultant fees and new spending related to graphics for International Translation Day. 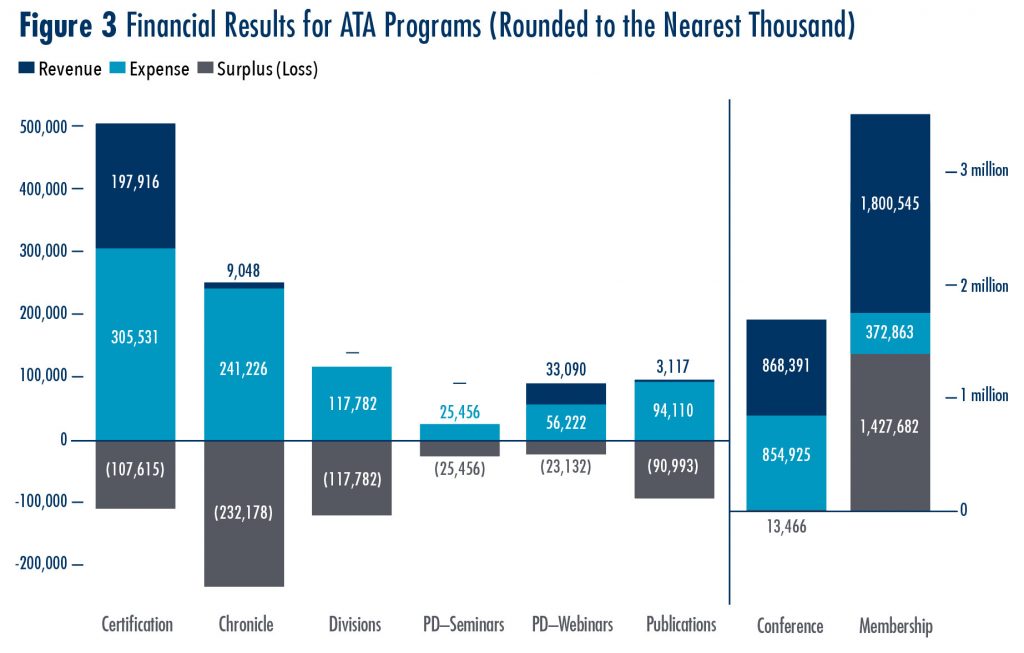 As noted in my last report3, ATA programs tend to run at a loss for the fiscal year. The most recent results are presented in the bar chart in Figure 3. The figures at the bottom of each vertical bar represent that program’s annual net gain or loss. For instance, the bar on the far-right side (Membership) shows positive net funds available ($1.43 million) from membership dues, which are used to finance most of the Association’s programs. While the figure at the bottom of the next bar over shows that the Publications program is running at a $90,993 loss.

Notice that certain programs such as the Chronicle and Divisions are almost entirely subsidized by dues. Other programs, including the Conference and Certification, actually generate revenue that helps offset their costs.

During the 2019–2020 fiscal year, the Conference was the only program whose revenues covered its total expenses. However, efforts have been made to generate more income from Professional Development (seminars and webinars), and the expectation is that these programs will become more self-sustaining in the years to come.

In terms of ATA’s longer-term status, it remains a mixed bag. For now, though, we’re still on fairly solid financial ground overall.

The good news, though, is that what ATA holds in cash, investments, etc., is still worth much more than it owes. In fact, this difference, recorded as Net Assets—Unrestricted, remained nearly unchanged—from $1.43 million a year ago to $1.42 million this year. This is still a healthy number for an association our size.

The 2019 Annual Conference in Palm Springs turned out better than expected. We knew it would be a smaller affair since it was being held at a resort hotel a bit farther from the large population centers where ATA hosts most of its conferences. Fortunately, the Association’s planning and hard work paid off, as we not only covered all direct and indirect costs, but actually recorded a small surplus ($13,466) when all was said and done. On the whole, it should be viewed as a success.

The two pie charts in Figures 4 and 5 show where the conference generated its revenue and how that money got spent.4

As noted under Figure 4, Registration is obviously the main source of revenue, but ATA also brings in money from exhibitors, Advanced Skills and Training (AST) courses, sponsorship, and even some advertising.

It’s clear from looking at Figure 5 that Overhead at ATA Headquarters is clearly the largest slice of this expense pie, but bear in mind that staff work on the conference year-round to make it happen. Other essential costs include everything from Wi-Fi to insurance, speaker honoraria, conference software, and other similar expenses. Food and beverage costs, which cover breakfast and the Welcome Celebration, are typically built into the overall event price and go toward paying for the physical conference space and breakout rooms.

Turning our sights on the 2020 conference, the biggest financial concern all the way through the summer had been the perceived burden of canceling the Boston in-person event outright and/or early because of contractual penalties that had been estimated at around $450,000. Fortunately, thanks to the hard work of ATA Headquarters, that contract was renegotiated, allowing the Association to reschedule the event in Boston for 2025. In exchange, all penalties were waived for the 2020 event.

For years now, we’ve noted that when an Annual Conference does well, ATA does well financially as a whole. The virtual event in 2020 was no different. Our reasonable expectation was that this conference would at least break even. As of this writing, that appears to be the case. In addition, it has served as an excellent learning experience and point of reference for future hybrid/virtual events. 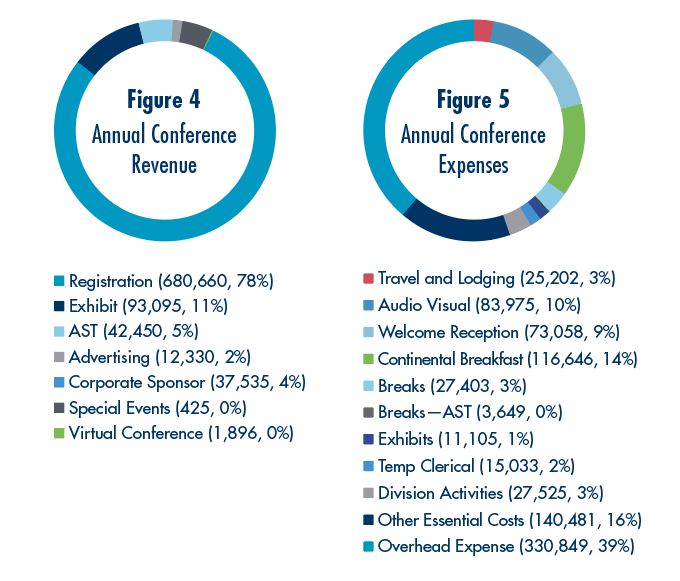 As mentioned at the outset, economic crises normally involve a certain lag time until impacts are fully felt. The figures reported here are through June 2020. As such, they don’t yet reflect the total financial impact on membership and the conference. What these numbers do demonstrate, though, is where we stood halfway through this unprecedented calendar year.

As of this writing (October 2020), ATA has savings and investments in excess of $2 million, with roughly $750,000 of that in cash. These figures imply that the Association has a financial cushion for the next few months as this crisis impacts our industry and ATA in particular. However, we’ve already started drawing down on those cash reserves, in large part because of cash-flow issues related to the virtual conference.

Two trends that preceded the current crisis may be exacerbated by it: declining membership and smaller or even negative net income from the conference. We continue to monitor membership numbers. For now, we expect at least a 5% drop year-on-year. The conference, for its part, is more of a mystery since we have no previous experience with virtual events of this size. The prudent approach, then, is to assume that breaking even would be a financial success.

The Finance and Audit Committee has met multiple times in between Board meetings to discuss these issues and consider their impact on the budget for the coming fiscal year (2020–21). We expect the Association to incur manageable losses. Our most likely scenario forecasts a negative change in net assets on the order of $225,000 for the upcoming fiscal year (2020–21). That would come on the heels of the $99,796 loss ATA experienced during the fiscal year ending in June 2020.

Therefore, theoretical conversations about streamlining the Association, reducing overhead, and lowering expenses will need to become practical implementations in the coming months. The Board and the membership, as a whole, should be prepared for some tough conversations, which will be necessary to ensure ATA’s continued financial success.

Preliminary Consolidated Statement of Financial Position as of June 30, 2020 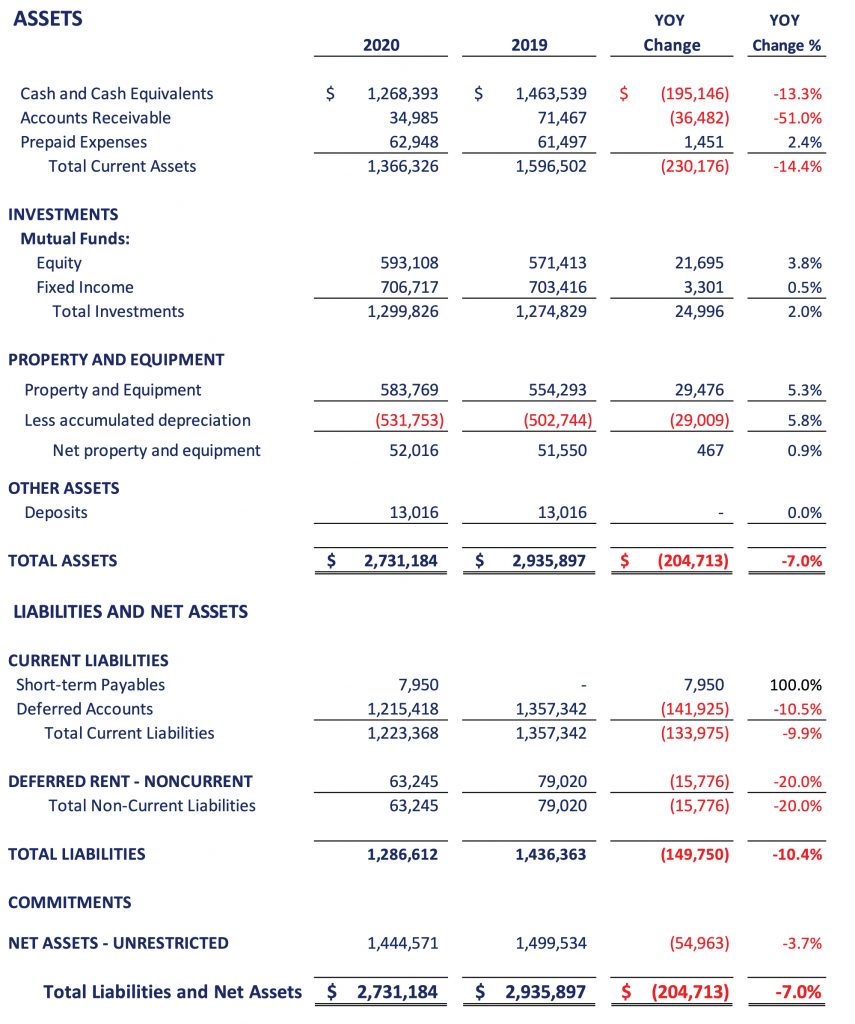 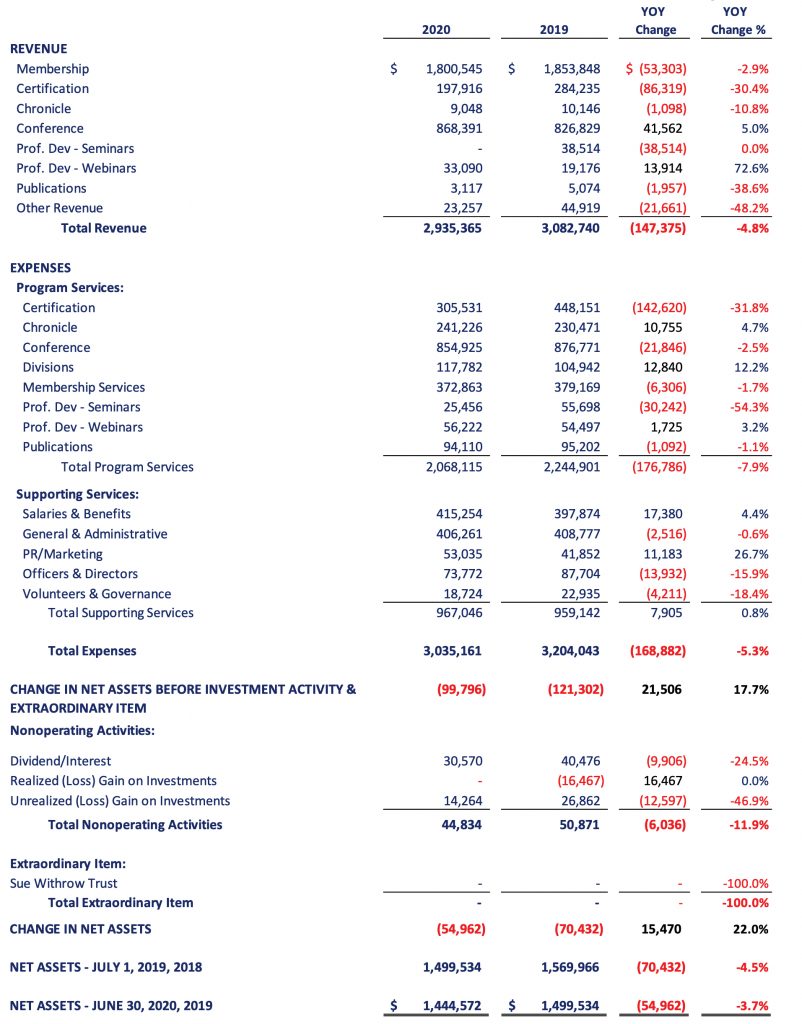 John Milan, CT is the treasurer of ATA and chair of ATA’s Finance and Audit Committee. He is also an ATA-certified Portuguese>English translator. He is an economist, writer, and lecturer on the business and economics of language services. He was an adjunct professor of economics in São Paulo, Brazil, for 10 years. He has been involved in the Carolina Association of Translators and Interpreters (an ATA chapter) since 2005, spending eight years on its board of directors, serving as president from 2013–2016. He has an MS in applied microeconomics from Ohio State University and degrees in international political economy and Spanish from Indiana University. john@milanlanguageservices.com