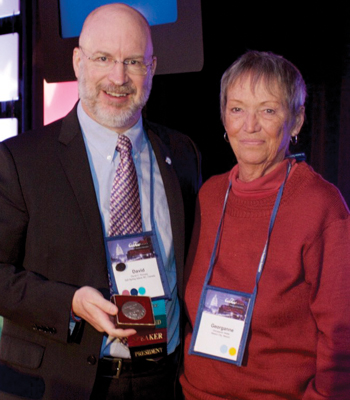 The American Translators Association is honored to recognize Georganne Weller as the recipient of the 2017 Alexander Gode Medal. ATA’s most prestigious award is named for one of ATA’s founders and its first president, and is presented to an individual or institution in recognition of outstanding service to the translating and interpreting professions.

Georganne has been a conference and legal interpreter (Spanish/Portuguese>English), educator, author, researcher (sociolinguistics and Amerindian linguistics), and staunch advocate for the translating and interpreting professions for more than 30 years. She has worked as a certified federal court interpreter, a contract interpreter for the U.S. Department of State, and a conference interpreter for the Canadian government. She has interpreted for international organizations such as the Organization of American States and the United Nations Educational, Scientific and Cultural Organization (UNESCO). She is a member of the International Association of Conference Interpreters.

Through her interests in translator and interpreter education, she has been instrumental in the development of numerous training programs, including the design of a master’s degree program in interpreting and translation at the Universidad Anáhuac in Mexico. She has also lectured and published extensively in the fields of sociolinguistics, language politics, bilingualism, and indigenous languages at regional, national, and international levels. As a legal interpreter, she has created a professional network linking interpreters of foreign, indigenous, and sign languages to organizations and government authorities, such as the National Institute of Criminal Sciences and the Mexican judiciary.

Over the course of her career, Georganne has championed the preservation of Mexico’s indigenous languages. As the director of linguistic policies at the Mexican National Institute for Indigenous Languages from 2006–2009, she promoted professionalization, training, and the certification of interpreters in these languages—work she continues to this day. She is also a founding member of Mexico’s Civil Association for Public Service and Community Interpreters and Translators. “Indigenous languages ​​are part of the intangible heritage of Mexico, the intangible heritage of the country,” she says. “They carry history, customs, traditions—everything.”

Georganne’s accomplishments have had a tremendous impact on the translating and interpreting professions. ATA is honored to have her as a Gode Medal recipient.

The Alexander Gode Medal is named for ATA’s founder and guiding spirit, who was the first recipient. The medalists represent a record of achievement in a variety of venues, including not only translators and interpreters, but lexicographers, theorists, association leaders, and institutions. This award may be given annually. 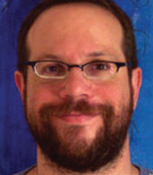 Alex Levine is the recipient of the Ungar German Translation Award for his translation from German into English of Exploratory Experiments: Ampère, Faraday, and the Origins of Electrodynamics, by Freidrich Steinle (The University of Pittsburgh Press, 2016).

The 19th century was a formative period for electromagnetism and electrodynamics. Hans Christian Ørsted’s groundbreaking discovery of the interaction between electricity and magnetism in 1820 inspired a wave of research, led to the science of electrodynamics, and resulted in the development of electromagnetic theory. In response, André-Marie Ampère and Michael Faraday developed two competing theories. Although their approaches and conceptual frameworks were fundamentally different, together their work launched a technological revolution that laid the foundation for our modern scientific understanding of electricity.

In this foundational study, Friedrich Steinle compares the work of Ampère and Faraday to reveal the prominent role of exploratory experimentation in the development of science. Focusing on the research practices of Ampère and Faraday, reconstructed from previously unknown archival material, Exploratory Experiments considers both the historic and epistemological basis of exploratory experimentation and its importance to scientific development.

Friedrich Steinle is a professor of the history of science at the Technical University of Berlin and president of the German Society for History of Science, Medicine, and Technology.

Alex Levine is a professor of philosophy at the University of South Florida. His earliest years were spent in the U.S., Germany, and Poland. Fully bilingual in English and German, he has a PhD in philosophy from the University of California, San Diego. His first academic position was at the University of Puerto Rico, Mayagüez, followed by 10 years at Lehigh University in Bethlehem, Pennsylvania. He joined the Department of Philosophy at the University of South Florida in 2005. He is coauthor of From Man to Ape and Darwinistas! He has published translations from German, French, and Spanish, including Paul Hoyningen-Huene’s Reconstructing Scientific Revolutions and Formal Logic: A Philosophical Approach. He is the editor of Perspectives on Science (Massachusetts Institute of Technology Press), a journal publishing contributions to scientific studies that integrate historical, philosophical, and sociological perspectives.

The Ungar German Translation Award may be bestowed biennially in odd-numbered years for a distinguished literary translation from German into English that has been published in the U.S. 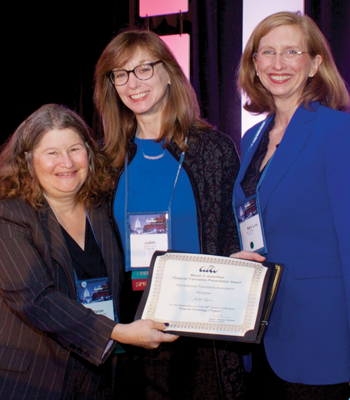 Judith and Mary Lou presented one advanced session (Financial Technology—Fintech) at this year’s Annual Conference in Washington, DC. They discussed how financial technology (or Fintech) is a rapidly growing disruptive force in the financial sector. New technology, like blockchain (the protocol underlying Bitcoin and other cryptocurrencies), is expected to create long-term systemic changes to the global financial system. Keeping abreast of developments in Fintech and its potential impact on financial products and services, payment delivery and settlement processes, financial regulation, reporting and compliance, etc., will be important for financial translators, who will need to understand how Fintech is affecting the financial sector. The presentation provided attendees with a broad overview of some existing and potential use cases for Fintech, including an introduction to Fintech terminology.

Judith has been a freelance (ATA-certified: French>English) translator since 2002, specializing in financial and legal texts. Her clients include multinational banks, investment companies, legal firms, and various direct and agency clients. Prior to translation, she worked for many years in commercial and retail banking in the U.S. and France and in the financial units of multinational corporations. She has a bachelor’s degree in languages and a translation certificate from Georgetown University, as well as a master’s degree in French from New York University.

Mary Lou is a financial translator (ATA-certified: French>English) with seven years of experience. She has been a freelance translator for the past three years. She has 17 years of commercial banking experience, during which she spent 10 years focusing on the electric power generation sector. She has an MS in translation from New York University. She lived in Paris and Milan from 1997–2014, and now shares her time between western Massachusetts and Paris.

Marian S. Greenfield is a past president of ATA (2005–2007) and the New York Circle of Translators. Currently, she is the president of the American Foundation for Translation and Interpretation. She has worked in the translation industry for over 30 years. A translator in New York’s Financial District for 20 years, she is the former manager of translation services at JP Morgan.

The Marian S. Greenfield Financial Translation Presentation Award is offered by the ATA and the American Foundation for Translation and Interpretation to recognize an outstanding presenter of a financial translation session during ATA’s Annual Conference. 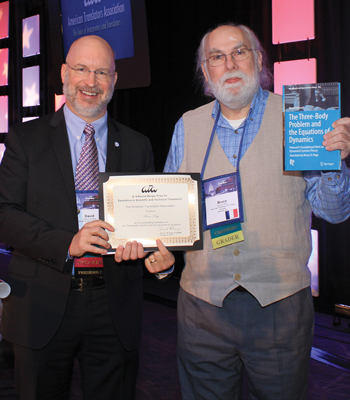 Bruce D. Popp is the recipient of the S. Edmund Berger Prize for Excellence in Scientific and Technical Translation. Bruce won for his translation from French into English of The Three-Body Problem and the Equations of Dynamics, by Henri Poincaré (Springer, 2017).

Jules Henri Poincaré wrote Sur le problème des trois corps et les équations de dynamique in 1890 for professional mathematicians and astronomers interested in celestial mechanics and differential equations. Poincaré started work on this monograph to answer a question about the stability of the solar system. He sought to prove whether the positions and velocities of planets in the solar system could be represented mathematically (as time-series expansions) for all time. He proved the state of the solar system cannot be predicted arbitrarily far in the future.

In his approach to the problem in this monograph, Poincaré took a very general approach to understanding solutions to the equations of dynamics (Newton’s laws of motion expressed as differential equations) for deterministic systems (meaning that there is no friction, heating, or other dissipation of energy). Without trying to solve the differential equations, he studied properties of the solutions with theorems (e.g., recurrence theorem) and geometrical representation (e.g., state space and Poincaré maps). The methods he developed are the foundations for the mathematical theory of dynamical systems, popularly called Chaos Theory.

While the importance of this work has been widely understood, the fact that the original work was written in French has meant that the full scope and brilliance of what Henri Poincaré did has been inaccessible to contemporary English-speaking readers. Bruce’s translation of The Three-Body Problem and the Equations of Dynamics provides readers access to Poincaré’s seminal monograph, recognized as a classic in the study of dynamical systems.

Bruce is an ATA-certified French>English translator with a BA in physics from Cornell University and a PhD in astrophysics from Harvard University. He is also a U.S. Patent and Trademark Office registered patent agent. As a professional translator, he performs translations of scientific and technical documents, especially patent applications. As an independent scholar, he applies his love of astrophysics, mathematics, and French to understanding the work of Henri Poincaré. 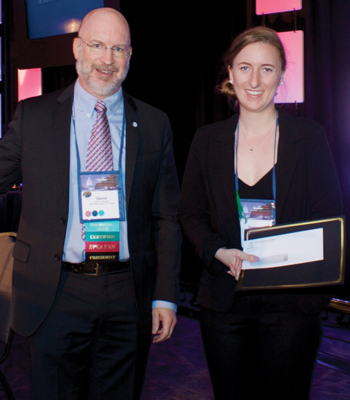 Delaney Swink is the recipient of the Student Translation Award for her translation project from Spanish into English of Maldito Paraíso (Damned Paradise), by feminist Chilean poet Rosa Alcayaga. Delaney recently earned her BA in international studies and Romance languages from the University of Oregon Robert D. Clark Honors College.

Rosa Alcayaga’s work combines literary and colloquial Spanish, and its cultural allusions range from Biblical-era patriarchs and resistant women heroes to Latin American history and current social-political issues, including gender violence. “Alcayaga incorporates Chilean linguistic features, including contemporary slang, that pose challenges for translation and push me to develop my poetic abilities and cultural knowledge while staying true to the character of the original text,” Delaney says.

The project began in the winter of 2017 at the University of Oregon, when Delaney enrolled in “Bodies Bilingual: Genders and Cultures in Translation,” a course taught by poet and translator Amanda Powell, which focused on theoretical and practical approaches to issues of gender and social justice in translation. It was in this course that she began translating Alcayaga. Since then, she has completed six of 43 poems in Maldito Paraiso.

Delaney’s project also received the Global Oregon Translation Studies Working Group Undergraduate Translation Award. The funding will help her travel to Chile for three weeks in January 2018, where she will meet and work directly with Alcayaga on the project-in-progress.

Delaney is currently an intern at MAPLE Microdevelopment, a U.S.-based international micro financing nonprofit organization. While at the University of Oregon, she was a student ambassador and served as vice president of the International Business and Economics Club. She spent a semester abroad in Rabat, Morocco, through the School for International Training at the Center for Cross-Cultural Learning, where she studied multiculturalism and human rights. She also spent a semester at Pontificia Universidad Católica de Valparaiso in Valparaíso, Chile. She wishes to work in the nonprofit sector in the area of advocacy for women and minority rights domestically and abroad.

The Student Translation Award is presented to any graduate or undergraduate student, or group of students, for a literary or sci-tech translation or translation-related project. The award may be given annually.