ATA at the United Nations Photo Exhibit "Interpreters on Mission: Contributing to Peace" 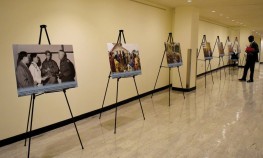 On September 26, 2018, at the invitation of Red T, a nonprofit advocacy organization, I was honored to represent ATA and the National Association of Judiciary Interpreters and Translators (NAJIT) at the opening ceremony of a photo documentary exhibition, “Interpreters on Mission: Contributing to Peace,” at the United Nations headquarters in New York City. The photos depicted linguists working in UN peacekeeping and peace-building missions.

This exhibition celebrated the second UN International Translation Day and recognized interpreters and translators for their contributions and vital role they play in international affairs. The opening ceremony featured several eminent speakers who focused on the critical importance of language and communications across borders and cultures.

The event took place during the opening of the 73rd Session of the General Assembly. It was organized by the Permanent Missions to the UN of Azerbaijan, Belarus, and Turkmenistan in cooperation with the Department for General Assembly and Conference Management. Valentin Rybakov, permanent representative of Belarus to the UN, delivered the inaugural remarks. Among the other speakers were: 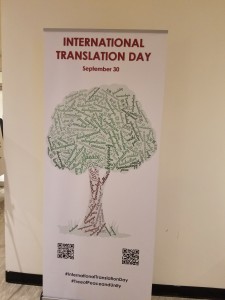 Attendees to the event included several representatives and staff interpreters from the UN, as well as ATA and NAJIT. It was nice to see representatives from across the U.S. and many other countries.

Since the UN was brimming with activity from many competing events during the General Assembly, Deputy Foreign Minister Andrei Dapkiunas compared the location, format, and promotion of the exhibition to the way language professionals are marginalized and often “get lost” in the process. Dapkiunas emphasized that interpreters and translators help make peacekeeping and peace-building missions possible. He noted that their sacrifices must be acknowledged and that the international community needs to provide appropriate protection, as translation and interpreting (T&I) professionals are indispensable for these missions. Dapkiunas stated that he doesn’t believe technology will provide a substitute for language professionals, but will serve as a tool to compensate for our deficiencies as human beings. 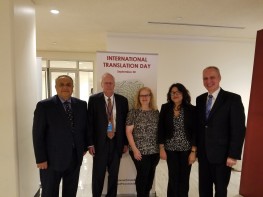 Maya Hess from Red T spoke about peace as a precious but often elusive commodity—one that would be even more elusive if it weren’t for the critical work of linguists around the globe who facilitate dialogue in the pursuit of peace while risking their lives. She outlined the efforts being made by an international coalition of language organizations (including Red T, the International Association of Conference Interpreters, International Federation of Translators, International Association of Professional Translators and Interpreters, Certified Languages International, and World Association of Sign Language Interpreters), as well as associations such as ATA and NAJIT, that are joining forces to raise awareness for our more vulnerable T&I colleagues. On behalf of the world language community, she called on the UN to adopt a resolution for the protection of civilian translators and interpreters in conflict situations similar to those addressing the safety of journalists and the issue of impunity.

Humphrey Tonkin, UN representative of the Universal Esperanto Association, discussed the progress the profession has made in protecting language workers from the risks of physical harm and even death in conflict zones. He highlighted the alarming number of interpreters and translators at risk and made a comparison between journalism, a similarly dangerous profession, and T&I. In support of his argument, he cited a New York Times article that disclosed some disturbing statistics regarding the increase of civilian losses since 1990. 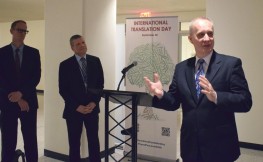 While I wandered around the exhibition, I chatted with other attendees, all of whom were moved by the content of the photographs. The general feeling was one of awe at what we’ve achieved as a profession and what is still at stake to protect our colleagues working in conflict zones.

Yet, as I walked the exhibition hall I realized there was much to celebrate on this particular International Translation Day. There is a Spanish idiom, Aportar nuestro grano de arena, which means to contribute our small part, “our grain of sand,” to an effort. Thinking of sand always makes me reflect on how insignificant we are individually. However, when looking from afar, a beach can be immense. That’s where my thoughts were that day. My fellow attendees and I might have been in a small corridor observing this fantastic effort put together by supporters of the language professions, but that corridor was in the United Nations!

The road ahead is long, but we are halfway there, or very much on the right track! 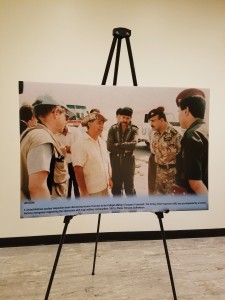 Photo by Pernaca Sudhakaran of a UN nuclear inspection team with the Fallujah Military Transport Command.

Hilda Shymanik is a Spanish staff interpreter for the Essex County Superior Court in New Jersey. She is also the president of the New York Circle of Translators and the treasurer of the National Association of Judiciary Interpreters and Translators. Contact: hshymanik@yahoo.com.