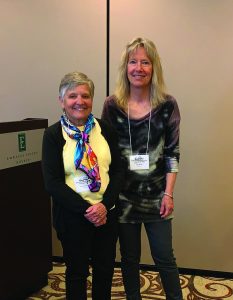 From left: ATA graders Holly Mikkelson and Jane Maier during their session, “Preparing for the ATA Spanish>English Certification Exam.”

In recent years, ATA has focused on providing those individuals who are interested in becoming ATA-certified with opportunities to learn more about the exam and hone their skills. Besides informational updates on ATA’s website, regular columns by members of the Certification Committee in The ATA Chronicle, and a variety of sessions at ATA’s Annual Conference, ATA has also explored options for holding regional exam preparation workshops for candidates. The first workshop, held in Boston in January 2018, was well attended and well received.

The second workshop in this series took place in mid-April in Alexandria, Virginia. That same weekend, ATA’s Board of Directors met in conjunction with the Certification Committee and Language Chairs meetings. (Each exam language combination has a language chair administering the passage selection and graders. ATA currently offers testing in 30 language combinations.) Scheduling the workshop to coincide with these meetings, which also took place in Alexandria, certainly made the logistics easier.

The April workshop was for Spanish only: an English into Spanish session in the morning, and a Spanish into English session in the afternoon. Each session was presented by two veteran graders working in the respective language pairs. Below are some highlights from these sessions, which are similar to those offered in recent years during ATA’s Advanced Skills and Training (AST) Day, which takes place the day before the ATA Annual Conference.

Two Graders for Each Practice Test: Those who registered for the April workshop were sent a sample ATA practice test to translate and submit to the two presenters before the workshop. Participants were instructed to try to simulate actual exam conditions when working on the test (e.g., only using approved software and reference materials, and completing their work within 90 minutes). These tests were graded exactly the same way as a regular practice test, with the grader supplying brief explanations of errors and acceptable solutions, as well as some overall comments to the translator. However, the advantage of participating in this workshop was that the two presenters from each session graded the practice tests in the respective language pairs. (A regular practice test is only graded by one grader.) After grading the practice tests, the presenters selected typical errors to include as examples in the workshop. If participants returned their practice tests by the deadline, they got the graded tests back at the end of the workshop. Those who did not return their practice test by the deadline received marked tests later.

More Time Spent Discussing Translation: In some earlier iterations of the workshop, a substantial amount of valuable time was spent discussing the mechanics of taking the exam and the grading process. For the April workshop, once they registered, participants received reading materials and a video link where they could review all that information in advance so that the actual workshop could focus exclusively on translation activities.

Dispelling Myths about the Exam: Following a discussion of the common reasons why people fail the exam, the various error categories were reviewed, including specific examples taken from actual exam passages used in the past. This was an opportunity to dispel some common myths: that punctuation rules are the same in English and Spanish (they actually differ substantially, and error points on that account can mount rapidly), or that the syntax of the original must be preserved in the translation (this is not the case if the result will sound awkward or unnatural). The English into Spanish presenters addressed the misconception that candidates should write in a particular “flavor” of Spanish. They reassured participants that as long as they’re consistent in the variety chosen and avoid obscure localisms, they will be fine.

Detailed Error Review: In the second part of each session, the presenters reviewed the submitted practice tests. Each sentence was discussed in detail, looking at typical errors as well as acceptable solutions. In some cases, the participants themselves were invited to use the Certification Program’s own grading tools to assess each rendition and compare notes. The presenters then offered their assessment, along with the rationale behind each grading decision, which prompted additional discussion. Participants were encouraged to ask specific questions about anything not covered or to request further explanation or clarification as needed. For example, at the end of the Spanish into English session, the presenters demonstrated how the Corpus of Contemporary American English1 can be used by translators to verify the usage of terms and collocations.

Maximizing Candidate Potential on the Exam

As in previous instances, the workshop was very well received. Participants were especially appreciative of the detailed feedback, and the hands-on approach of using the participants’ own work was considered especially effective. Participants left with a very good sense of whether they were ready for the exam, with some deciding that they needed more time and study.

ATA plans to continue offering these workshops at various locations and hopes to expand them to other language pairs in the future. Both Spanish sessions will also be offered at this year’s AST Day during ATA’s Annual Conference in Palm Springs, October 23–26.

David Stephenson is the chair of ATA’s Certification Committee. An ATA-certified German>English, Dutch>English, and Croatian>English translator, he has been an independent translator for over 30 years, specializing in civil litigation and creative nonfiction. Contact: david@stephensontranslations.com.