Common Sense Advisory (CSA, commonsenseadvisory.com) coined the term “augmented translation” some time back, and while I always felt that I understood what it meant, I never really looked into the specifics. Now I have and think it’s an interesting term that we’re all better off being acquainted with (whether we like the term or not).

Merriam-Webster defines “augmented” as “made greater, larger, or more complete” and “augmented reality” as “an enhanced version of reality created by the use of technology to overlay digital information on an image of something being viewed through a device.” (This is the context where most of us have encountered “augmented” recently, which is not to be confused with “virtual reality.”)

Though it may sound a little spacey and very unlike “crotchety”1 St. Jerome’s style of translation, “augmented translation” might still be a pretty good fit. After all, we do use a lot of digital information to aid us in our translation, and we’ve done so for a long time. The difference between now and, say, five years ago when the term wasn’t in use is that there is more digital data in additional formats available to us now than there was previously.

After a number of emails back and forth between CSA and myself regarding when “augmentation” starts and how valid this concept is across language combinations, they were kind enough to send me this definition:

CSA research contends that augmented translation isn’t completely new. Translators have long used web searches, external terminology databases, product information repositories, and other such items, but working with these required stepping out of the translation environment to carry out some action, thus disrupting their cadence. The difference with augmented translation is the degree of integration with external informational resources, such as term discovery, outside machine translation (MT), and semantic linking within the tool, which prevents the need to leave and hunt for information.

The part the market research firm emphasizes is that this does put the translator back in the center. In it, MT and all the other parts are suggestions designed to add additional, contextually relevant information, but the translator is in control. CSA research chose the term ‘augmented translation’ on the model of industrial ‘augmented reality’ tools that allow you to take a tablet or phone or goggles and view a device or assembly and have overlays of things like sensory data, part names, part numbers, disassembly or assembly instructions, or diagnostic steps you should take.

Spacey? A bit. But I like it. Quite a bit, actually. I love the fact that translators are in the center and use just the tools that help them drive the process. This is also well exemplified by Figure 1 below (also generously provided by CSA). 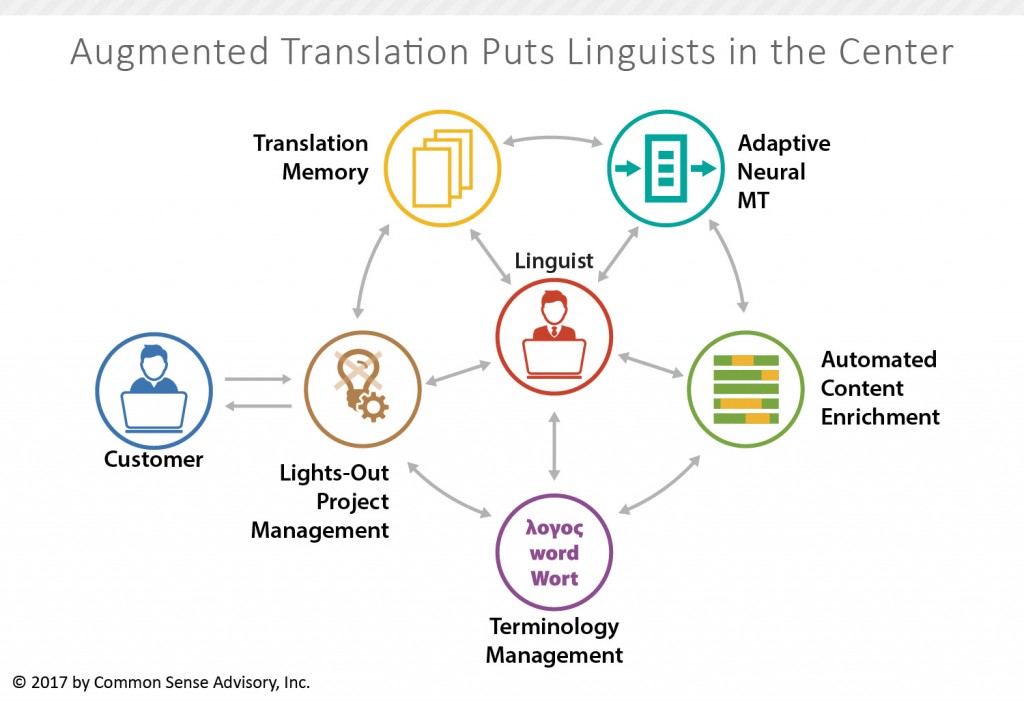 We’ve been using terminology management, project management (whether on our own or through the client), and translation memory for a long time. “Adaptive neural MT” is also a reality for many of us, and (hurray!) it’s not driving the process. Instead, it’s just one more valuable tool for the translator—not primarily through post-editing, but as a resource that can be harvested for fragments of various sizes. (I probably would have said “Adaptive neural MTs” just to emphasize that there could be more than one engine at a time, but then you would have to add a plural ending to TMs and termbases as well.)

Automated content enrichment is defined as “a new technology that scans content to identify the concepts, dates, places, and other information in it, then links them to online resources” (i.e., manual web research in an automated fashion). This is not something many of us deal with a lot at this point, but I can certainly understand and appreciate that this is gaining importance.

And here’s a good example of where I would want to make a point if I were introducing someone to the concept of augmented translation. All translators do it to some degree, but no one does it as much as is possible, particularly because “possible” is an ever-moving target. In reality, there are so many approaches to translation and translation technology (whether by our choosing or because some technologies just might not be available or accessible in our language combination or geographical location) that we all have to put on the suit that fits us. And sometimes it might be only a boot or two.

Jost Zetzsche is the author of Translation Matters, a collection of 81 essays about translators and translation technology. Contact: jzetzsche@internationalwriters.com.

This column has two goals: to inform the community about technological advances and encourage the use and appreciation of technology among translation professionals.