Terminology drift is a document level error involving inconsistent use of terminology. To find and correct terminology drift, you need to be aware of the possibility that it will happen and actively look for it.

I use the term “terminology drift” to refer to a phenomenon I first observed while editing translations. I would come across a technical term I thought was translated incorrectly, and after some research would replace it with a translation that I thought was better. Continuing my editing, I would see that the same term occurred again in the source text, but this time the translator would use the translation I had decided on after my research. I would think, “It’s good we decided on the same term, but why didn’t the translator go back and correct the first occurrence?” It wasn’t too long before I found when I was self-editing my own translation that I had done the same thing. For example, a word (or noun phrase) used consistently in the source text with a specific meaning was not translated consistently in the target text. In other words, the terminology had drifted.

What is Terminology Drift?

In some situations, varying word choice reflects a deliberate choice. This choice can serve a rhetorical purpose. For example, in French, where this rhetorical consideration is more important than in English, writers are taught to avoid repeating the same word. This can be achieved with constructions like “the former” or “the latter” or with pronouns. Relevant to this discussion, a synonym can be used to avoid repetition. This reflects a stylistic choice and is different from what I mean by terminology drift.

Terminology drift does not mean changes in usage or connotation of a word occurring over decades or centuries. That kind of drift is familiar to anyone who has tried to read William Shakespeare, François Villon, or Geoffrey Chaucer. Here, I am referring to unintended changes or variations in word choice within one document being translated. Nor should terminology drift be understood to indicate a direction: the change in word choice can go back or forth or touch several possibilities.

Terminology drift is an error of consistency, or global cohesion, within a single translation. It is accidental or incidental to the process of preparing the translation.

Once I had recognized terminology drift as a type of possible translation error, I started to look for it when self-editing or editing. As is the nature of such things, I started finding it all over the place in my work involving both challenging terminology and workhorse words. For example, in most patent writing the words “includes” and “comprises” are strictly synonyms and can be interchanged freely. So, within one document, should I be consistent about which synonym I use? This could be an instance of rhetorical variation. But, because I’ve looked for it, I know I can change these words up pretty freely.

When I’m editing another person’s work and thinking that it’s really pretty good, it has happened that I’ve stopped to check whether they’ve been consistent in using a word only to find that they’ve been inconsistent and that I’ve missed it in the part I had already checked. Not only is terminology drift everywhere, it can be hard to spot without taking specific steps to look for it.

Why Does It Happen?

Translation Tools: Some errors are produced randomly by the tools we use. Personally, I encounter voice recognition errors when using Dragon NaturallySpeaking (DNS), something I refer to as “Dragon Breath.” DNS uses voice recognition to transcribe dictation into correctly spelled text (spell checkers don’t find Dragon Breath). DNS has difficulty distinguishing certain consonants in my speech, and words with those consonants can be refractory to training. From experience I know that words like “service” and “surface,” “incidence” and “incidents,” “file” and “vial” are likely to be swapped. If a misrecognition has happened once, it has probably happened several times and needs to be hunted down and corrected.

Dragon Breath can be amusing. My personal favorite voice recognition error is “adrenergic” transcribed as “angry nerd chicks.” Delivering a translation to a client with that kind of error in it is a subject for nightmares.

Memory: Various aspects of memory and learning can also lead to terminology drift. Different fields may use the same term but with different meanings that require different translations. Different fields may even use the same term with the same meaning, but it might still be necessary to translate it with a different target word in the two fields. Here, even if I’m familiar with both fields and with the correct source and target words in each field, I might sometimes use the conflicting word from the wrong field in a document.

If I don’t remember or recognize that I recently translated a particular term, I may translate it differently. This often happens the following morning. Seeing the term fresh in a new context might lead me to have a different understanding of what the term could mean. I might then have a better idea of the right word to use in the translation or a better basis for choosing between alternatives suggested by terminology research. If I start to research the meaning of a term a second time, I may find a different resource I didn’t see the first time. These two possibilities (i.e., gaining a better understanding of the term from the context, or finding a different resource) can be good for finding a better, more accurate translation of a term. This is a major reason why I try to deal with terminology drift rather than prevent it.

Linguistic Interference: Interference can also lead to terminology drift. In computer science, for example, the French word “file” means a “queue,” and it also looks a lot like the English word “file.” In this example, interference can lead to a confusing mix of “queue” and “file” in the translation. 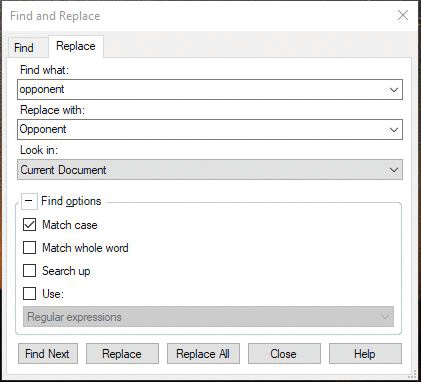 I use two basic strategies to deal with terminology drift. The first strategy is reactive and is done during self-editing or even while editing other people’s translations. The second strategy is proactive and involves recognizing, while translating, words that have a potential for being translated inconsistently and dealing with them early on in the process. The second strategy is helpful, but doesn’t eliminate the need for a reactive approach during self-editing.

Reactive Strategy: The reactive approach involves looking for terminology drift that may have already occurred and responding to it. The section below on using your tools has examples of how to use your translation environment tools to apply this strategy.

Proactive Strategy: There are also strategies for trying to prevent terminology drift, such as preparing and following glossaries. Preparing a glossary involves identifying terms that need to be researched and finding good translations. The risk is that during translation you could identify a term that wasn’t researched in advance but should have been. At that point, you need to ask, “is that the first time I saw this word in this translation?” Or, you could identify a better translation for a term than what is in the glossary. In either situation you have the potential for drift, so you need to go back and update the translation for previous occurrences (if any) of the term. Here, auto suggestions provided in Trados or other applications can be useful. When you start typing, the application can suggest a word or phrase you already used. Some care is needed here because it may be that the word or phrase suggested is one you decided to stop using and translate differently. Personally, I think that inconsistency is going to happen anyway, which I don’t think is a bad thing—if found and corrected—since it can offer more chances to come up with better ideas and alternatives. 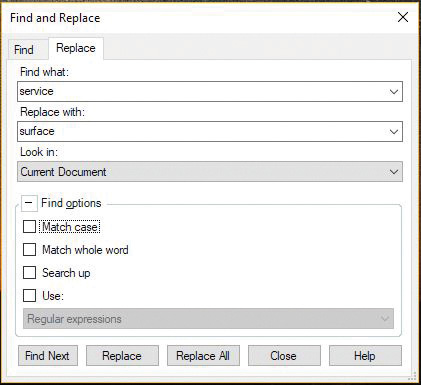 Let’s look at some practical examples of how to deal with terminology drift. The figures accompanying this article are screenshots from Trados Studio 2017. Most translation environment tools provide similar functions that can be used for the same purpose.

Searching: Let’s start with a particularly simple example that refers to Figure 1. In your recent translation, were you consistent in capitalizing certain keywords? In some contexts, words like “opponent,” “respondent,” “lessor,” and “clinical trial” need to be capitalized consistently. How can you be sure you were consistent if you don’t check? Figure 1 shows an example of searching for an instance in a document where the word “opponent” was not capitalized and needs to be replaced with the capitalized form. (Checking the “Match case” box ensures that instances of the word that are already capitalized are not found.) Some grammar checkers do flag this kind of inconsistency.

The second example in Figure 2 is also straightforward and demonstrates using the “Find and Replace” function. Once you find an instance of Dragon Breath, or some error of another origin, it’s important to realize that if it happened once, it could happen again. The only way to know if it did happen again is to search for it. The example in Figure 3 shows an instance where more attention is needed when replacing a word because “service” could be the intended word and not a misrecognition of “surface.” To reduce the number of false positives (instances where “service” was used correctly and should not be replaced) it may be useful to also filter the segments for ones that contain “surface” in the source. This is where the use of filters can help tremendously.

Figure 3: Filtering for a source term whose translation may have drifted

Using Filters: Figure 4 shows the part of the Trados toolbar for filtering where segments are displayed. The filter is applied to all source segments, so only segments with the term fenêtre (in upper or lower case) will be displayed. A portion of the results after filtering for the term fenêtre are shown in Figure 4. The first two times fenêtre was translated as “aperture,” but the next time it was translated as “window” and later corrected with track changes. There were further occurrences (not shown) in the document, so “Find and Replace” was used to change “window” to “aperture.”

There are a few things to be aware of when using filters. In the example shown in Figure 4, the filter found both the singular and plural form of fenêtre, but for other words it may be necessary to filter separately for the singular, plural, or other forms. The term you’re looking for with the filter may appear more than once in a single source segment, so more than one verification is needed in that target segment. It’s also possible that other segments may have a second or third alternative for the translation of fenêtre (e.g., “opening”).

It’s also possible to combine a filter with a “Find and Replace” function. In the example shown in Figure 4, it would also be possible to search the target segments for “aperture,” and if the results skip one segment you would know to check that segment to see how fenêtre was translated in it. Similarly, searching the source for fenêtre would show segments where it appeared more than once, so all occurrences in the target part of the segment could be confirmed. So, using and gaining experience with filtering does pay dividends.

Using filters proactively is also helpful. If you need to research a term, filtering the source for all occurrences of that term will allow you to see if the term appears in other contexts that offer a clearer idea of the meaning or more promising avenues for researching the term. It’s also possible to add notes or translate fragments of the filtered segments to provide guidance for when you actually progress to that segment in the translation.

Bruce D. Popp is an ATA-certified French>English translator of patents and scientific and technical documents. He was the recipient of the 2017 S. Edmund Berger Prize for Excellence in Scientific and Technical Translation. He has a PhD in astronomy. Contact: bdpopp@bien-fait.com.