When you start the program, the initial screen displays information on how to get started with OmegaT in five minutes. (See Figure 1 below.) And they’re not kidding. To use the basic features, you just start using the program and it works. When it comes to fine-tuning the OmegaT setup, you might find some items available in menus with an easy-to-use graphical user interface, but for other features you’ll have to manually set up files and edit configuration files. 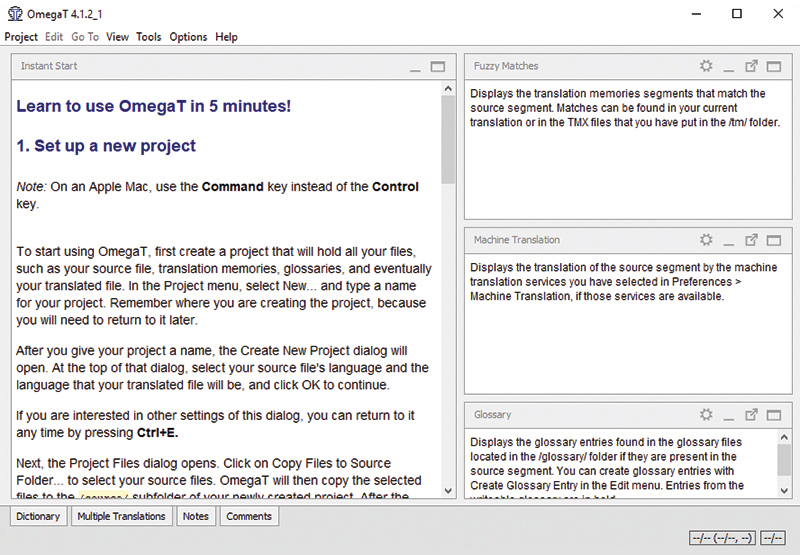 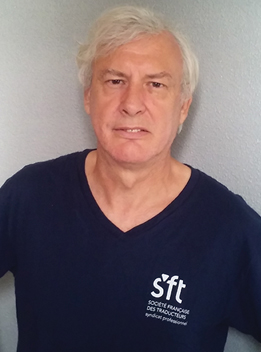 I decided to talk with Didier Briel, OmegaT’s project manager, about the tool and its users. After a first career in computing, notably as product architect, technical director, and marketing and strategy director within European enterprise software vendors, Didier became a translator and a consultant in 2004. He started contributing to OmegaT in 2006, became development manager in 2007, and project manager in 2014. In parallel to his translation activities, he provides consulting, training, support and development services, mostly on free translation environments. He is also a member of the Société française des traducteurs. You can contact him at didier@didierbriel.fr.

Can you give us some idea of OmegaT by the numbers?

Number of supported file formats: 40 native formats, plus 15 formats provided by the Okapi plugin, for a total of 55.

Number of current OmegaT team members: I’m the project manager and the Twitter community manager. For development, we have occasional contributors rather than a fixed number of developers who might contribute after months or even years of inactivity. Currently, we only have two people contributing regularly (the integration manager and I), but we had seven different contributors in 2017. We have one documentation manager, one localization manager, and two Facebook community managers. We also have a large number of translators, some regular and some occasional. OmegaT is available in 35 languages, with complete documentation in 14 languages.

Frequency of updates: We don’t schedule updates. We release them when we feel they are stable and contain enough new things to justify a release. We have two versions: a “Standard” one, with mostly bug fixes, and a “Latest” (or “Beta”) one with new features. The Latest is generally stable, but may not have an up-to-date manual. We’ve released three updates so far this year for the Standard version and five for the Latest version.

Estimated number of regular users: We don’t have reliable numbers for this. We have 2,596 members in the Yahoo user group. Not all these members are regular users, but there are plenty of users we only hear about by accident.

What makes one decide to become a part of the OmegaT team?

We’re an informal association. This means that apart from very specific roles, such as localization manager, you don’t even have to be a permanent member of a team to contribute to the program. In addition to development, some of the areas where we ask for volunteers include document authoring, localization, and testing. Volunteers can choose to contribute a single time, once every few months, or several times a month.

The second reason is gratitude—to give something back to the project. When a free application is your main tool, some will want to show their gratitude with a donation and others by volunteering their time to help make it better.

What makes one decide to become a user of OmegaT?

Our user base is very diverse.

Are there translators for whom OmegaT would not be a good match? For instance, how does it deal with server-based or cloud-based work­flows that are provided through other tools?

If your client works with an online tool or one that’s server-based, it depends on whether that tool offers a roundtrip (i.e., a way of exporting and re-importing data). If yes—that’s the case for XTM, for instance, with XLIFF export and import—you can probably use OmegaT. If not, that might not be possible.

If your client insists on sending you proprietary packages (e.g., Trados Studio) and wants target documents in those packages, OmegaT will probably not be a good choice. On the other hand, if the client is happy with a form of XLIFF files (.sdlxiff, mqxliff, etc.), then you can probably use OmegaT.

With our limited resources, we have to make the most of our development time. So, when something really useful is already developed, why not take advantage of it? We are also very “agile.” With no fixed schedules and no marketing plans, we can sometimes have a technology developed and delivered in a few weeks instead of months.

Our developers are all involved in translation. We introduced Google Translate because our lead developer was from Belarus and Google had just added Belarus to its list of languages. Because of the “selfishness” mentioned above, our developers tend to add what matters most to them.

I don’t think the average OmegaT user is more technically inclined than the typical translator. Some of our users are self-professed technophobes. For morphology, if you have the choice between entering regular expressions in your glossary and having OmegaT manage it for you automatically, what option do you think the not-technically-inclined translator will prefer?

If I really had to pick only one of the greatest strengths, I would say efficiency. Of course, there’s also the community. It’s hard to pick between those two. One of the greatest weaknesses is the price. For some, this prevents OmegaT from being taken seriously.

What do you see happening with OmegaT in the mid-term future? For instance, might it ever morph into a browser-based tool?

I have no real idea what might happen. A lot of our features were not even planned a few months before they happened. As for becoming only a browser-based tool, that’s unlikely. There was an OmegaT-based tool called Boltran, but it didn’t attract much attention (though it’s true that its features were limited). What would be more likely is a close tie between team projects and a web-based interface to define projects, select translators, etc., while still using the desktop application to actually translate.