Highly specialized translation conferences may be few and far between, but they’re worth their weight in gold.

On July 4, 2018, 120 expert financial translators from 12 countries and representatives from national and multinational institutions descended upon Brussels to attend the Université d’été de la traduction financière (UETF), the biennial Summer School for Financial Translators. Organized by the Société française des traducteurs (SFT)—this year with support from host institution BNP Paribas Fortis—UETF is an intense three-day conference packed with sessions, workshops, and networking opportunities. This event is generally not recommended for novice translators or for the faint of heart.

Why would some attendees travel nearly 4,500 miles to attend? Quite frankly, it would be tough to pass up a speaker lineup featuring Jean Paul Servais, chairman of the Belgian Financial Services and Markets Authority (FSMA)—roughly the equivalent of the U.S. Securities and Exchange Commission—and Vincent Van Dessel, chairman and chief executive officer of Euronext Brussels, along with 16 top industry experts. Executives of this caliber don’t often take time out of their busy schedules to address language professionals.

UETF 2018 featured 18 sessions over three days, delivering invaluable content and helping attendees expand their subject matter expertise, keep abreast of the latest trends in the fast-paced world of finance and economics, and—last, but definitely not least—improve their translation skills through downright granular translation slams and hands-on workshops. Here are some highlights and insights from the event.

Conference attendees had an extraordinary opportunity to hear Brexit commentary and analysis from two renowned speakers—Joris Luyendijk, an author and journalist from the Netherlands, previously based in London, and Charles Grant, co-founder and director of the U.K.’s Centre for European Reform. Grant decided to make his session off-the-record, so, unfortunately, I cannot recap or remark on his speech (but I’m delighted to finally have the chance to say I can’t talk about something because it was off-the-record).

Luckily, Joris Luyendijk spoke on-the-record in his session (“Brexit: Why It Happened, How It Happened, What Happens Now?”), and what a rousing and frank speech it was. For an hour, Luyendijk led attendees on a colorful and sometimes jarring journey through “leaver” and European mentalities as they navigate tempestuous Brexit negotiations.

So why did Brexit happen? For this Dutch observer, Britain has a powerful misinformation machine with a host of media outlets, notably tabloids that he says skew the truth. Together, these have stirred negative sentiment within certain demographics in the country for decades. Now that U.K. citizens have voted to leave the EU, the same misinformation machine is downplaying the economic consequences of this decision, both on a national and international scale. By contrast, Europe doesn’t have a unified media presence at an international level, which, Luyendijk says, means very little accurate information on the real consequences of Brexit is being published.

How did Brexit happen? Luyendijk says the referendum was “presented as just another stunt.” In addition, a peculiar phenomenon occurred. David Cameron and Boris Johnson both—uncharacteristically—underestimated their respective popularity, while Theresa May believed herself more popular than she really was. The end result: the “leavers” won the Brexit referendum although no official sincerely wanted it to happen.

What happens now? According to Luyendijk, Britain needs to wake up, realize it’s no longer in a position of power, and come to the negotiation table with realistic expectations and awareness that the EU will not go easy on them under any circumstances. Because the EU simply can’t. Any leniency would make every member of the EU wonder if they should leave the EU next, so it’s paramount that they make an example of Britain to show all other EU member states that leaving is a terrible idea. Luyendijk says the future of the EU depends on it.

What about Luyendijk’s personal take? He’s glad Britain voted to leave, as he believes the rest of the EU will be better off without them.

An Insider’s Guide to Euronext

Vincent Van Dessel, chief executive officer of Euronext Brussels, took us on a virtual tour of the Euronext stock exchange in his presentation “Euronext, le plus grand marché européen, construit selon un modèle fédéral” (“Euronext, The Largest European Stock Exchange, Based on a Federal Model”). He began with an overview of Euronext. If you’re not familiar with it, Euronext, as the title of the session suggests, is the largest European stock exchange, describing itself as “pan-European.” Founded in 2000 and listed since 2014, it operates member exchanges in six cities across Europe (Paris, Brussels, Lisbon, Amsterdam, London, and Dublin). Companies listed on Euronext markets include AB Inbev, L’Oreal, Airbus, and Danone. Each Euronext member exchange has its own regulator. Representatives from all six exchanges form a College of Regulators to discuss current market events and new developments.

Van Dessel provided his perspective on the role of markets and exchanges in the economy. He urged us to let go of the notion that the markets themselves influence the economy. Buyers and sellers really do the influencing—the stock exchange merely offers them the space to make it happen. He then walked us through the multitude of players and financial instruments involved in the stock market and their various roles in the investor universe. Finally, he explained how prices are formed from Euronext being an order-driven market—like the New York Stock Exchange and Toronto Stock Exchange—and how they use a fixing (price setting) schedule to minimize market volatility. I enjoyed reflecting on how Belgium (and other markets in Europe) seem to make more of an effort to maintain market stability than their U.S. counterparts.

The Guardians of Belgian Finance

Jean Paul Servais, chairman of the Belgian FSMA, shared a meticulous account of FSMA and how it oversees the entire Belgian financial sector in his presentation “Rôles, réalisations et défis d’une autorité de contrôle telle que la FSMA” (“FSMA: Roles, Achievements, and Challenges”). FSMA was established by Belgian law on April 1, 2011 as an independent public institution and fulfills tasks assigned to it by the Belgian Parliament. Both the National Bank of Belgium and FSMA oversee the Belgian financial sector, but FSMA is responsible for overseeing the following areas:

Servais stressed how FSMA protects consumers by ensuring that investment products offered on the market are easy to understand, with as little fine print as possible. It also wants consumers to know exactly what fees each product entails. To that end, they verify that all financial product advertising is honest, clear, and user-friendly, and ensure that the financial products themselves comply with all applicable laws and regulations.

FSMA also monitors the stock market in several ways. First, they make sure companies meet financial reporting requirements, publishing complete information in a timely manner that accurately and faithfully depicts the company. Second, they verify that listed companies treat all shareholders equally. They also supervise how the markets themselves operate (including Euronext) and step in if needed. One thing I found fascinating was that Belgium suspends trading fairly regularly to maintain market stability. They also halt trading prior to press release publications (at the company’s request), which curbs insider trading. In addition, they supervise and regulate all types of brokers (banking, insurance, stock market, etc.). Overall, FSMA takes a prudent and responsible approach to financial oversight, and it was fun to learn the ins-and-outs of this institution compared to France’s stock market regulator, the Autorité des marchés financiers, the institution I know most about. 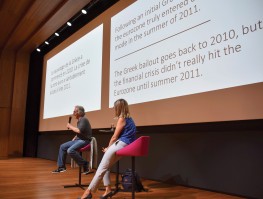 Larry Cohen and Rosie Wells discuss their respective translations of a financial article with the audience during a translation slam at UETF 2018. Photo credit: Bernhard Lorenz.

As an attendee from the U.S., I found the session by Belgian economist Bruno Colmant, “Une économie incertaine” (“An Uncertain Economy”), the most gripping of them all, as he spoke at great length about the U.S. role in our global economy’s uncertainty.

He began by explaining the latest recessions for the U.S. and Europe and their respective recovery times (Europe’s recovery being slower than in the U.S. due to a third financial crisis in 2011). Colmant believes the global economy will continue improving throughout 2018, but warned that we are approaching the end of a growth cycle. Some warning signs of potential future instability are already visible—labor underutilization rates are still quite high in Europe, the Eurozone is still grappling with tensions between high-production countries in the north that want to make the euro as strong as possible, versus lower-production countries in the south that can’t keep up. The Phillips curve has flattened in the U.S., and wealth inequality and ageing populations are on the rise. (The Phillips curve is a single-equation econometric model representing the relationship between the rate of inflation and the unemployment rate.)

In addition to these current phenomena, there are any number of potential incidents that could trigger another crisis, such as a major central bank ending its monetary policy, higher inflation, geopolitical risks, rising isolationism around the world, and an economic downturn in China. Many of these potential incidents could be sparked by the unpredictable decisions made by the current U.S. president—launching trade wars, starting Twitter fights, ostracizing allies, exhibiting authoritarian tendencies, and threatening to leave international organizations and agreements such as the North Atlantic Treaty Organization, G7, World Trade Organization, and North American Free Trade Agreement. Any of these actions could have fast and far-reaching consequences from an economic standpoint. Brexit in the U.K. adds additional potential stress on the global economy, and Colmant warned that a hard Brexit would be tough for everyone.

As a U.S. citizen, I found Colmant’s talk poignant. Whatever your politics, you likely read local media and news that resonates with your own worldview. Hearing Dr. Colmant, who is not emotionally invested in American politics the way I am, talk about the global impact of our current political climate, was both powerful and educational. It’s a talk I will not soon forget.

And That’s a Wrap

While this was my first time attending UETF, it will not be my last. Of all the annual translation conferences I’ve attended over the past eight years, none have catered so specifically to enhancing my skills and subject-matter expertise. I especially appreciated hearing directly from industry experts in addition to translation experts.

I left the conference with a greater appreciation of the interplay between politics, government regulations, and finance. I also brought home additional translation tricks and tips to help transform the most complex French texts into eye-catching English prose. It wasn’t easy picking a handful of sessions to highlight, as they were all thought-provoking and relevant to the field. For a full list of the conference program, see http://bit.ly/UETF2018-program.

Amanda N. Williams is the assistant administrator of ATA’s Literary Division. An ATA-certified French>English translator, she specializes in business, international trade, and financial translation. She worked for one of the top 100 largest ocean importers in the U.S. She held various roles, including sales, operations, and trade compliance manager, where she was responsible for managing a U.S. customs audit and creating, implementing, and maintaining the company’s import compliance program. She served six years on the board of directors of the Atlanta Association of Interpreters and Translators, an ATA chapter. You can find her on Twitter as the Adorkable Translator (@Adorkable_Trans) or on her website at www.mirrorimagetranslations.com. Contact: amanda@mirrorimagetranslations.com.