Growing Your Career, Translation
By The ATA Chronicle

Learn what to clarify, what to sacrifice, and what to preserve in literary translation by exploring effective strategies for navigating the challenges of interpreting character voice, symbolism, and cultural nuances.

Literary translators are bridging the cultural and linguistic divide for readers worldwide. When translating a literary text, attention must be paid to a multitude of language features. As translators, we must capture tone, voice, rhythm, dramatic structure, themes, rhetoric, and historical context to effectively introduce new readers to a work of literature. Often, linguistic rules cannot be strictly applied, forcing us to maneuver within a spectrum of choice that has fuzzy borders.

When leafing through a work of literature, we frequently come across quotations, sayings, songs, poems, and unique character expressions. Effective translation of these literary elements requires us to perform extensive research, use our narrative skills, and make interpretive decisions about the text. Sometimes our research will help us determine whether or not to translate a particular word, phrase, or utterance. These decisions can be straightforward when the process is inside the spectrum of translatability. (See Figure 1.1) However, many of the choices we face are as unique and nuanced as the authors we translate. Let’s examine a few borderline cases to see how literary translators navigate the fuzzy ends of the spectrum.

Many authors work with quotations at the beginning of a chapter or use them to break up a chapter into segments. The quotations can be from poets or writers, philosophers, famous people, or anonymous sources. Keeping the plot and readership in mind, we must evaluate the following options:

The decision here becomes clearer depending on the established relationship between the source and target languages and whether the author is widely known. A search of reference material or an online search might yield more than enough acceptable translations. This makes it critical to choose the most reliable source, which is easier said than done. If a faithful translation doesn’t exist, then you must take on the challenge of translating it yourself.

Idioms and sayings are even more specific than quotations. These expressions reflect behaviors, traditions, and customs of a culture or group, which can be extremely difficult to translate. For some language pairs, a decent number of good translations are available, but only for some. Other languages will have no equivalents for particular expressions. For example, how could someone from a country where baseball is not a sport intuit the meaning of “in the same ballpark” or “knock it out of the park”? In such cases, it might be best to find an equivalent sport familiar to that culture to provide the reader with the same reading experience. 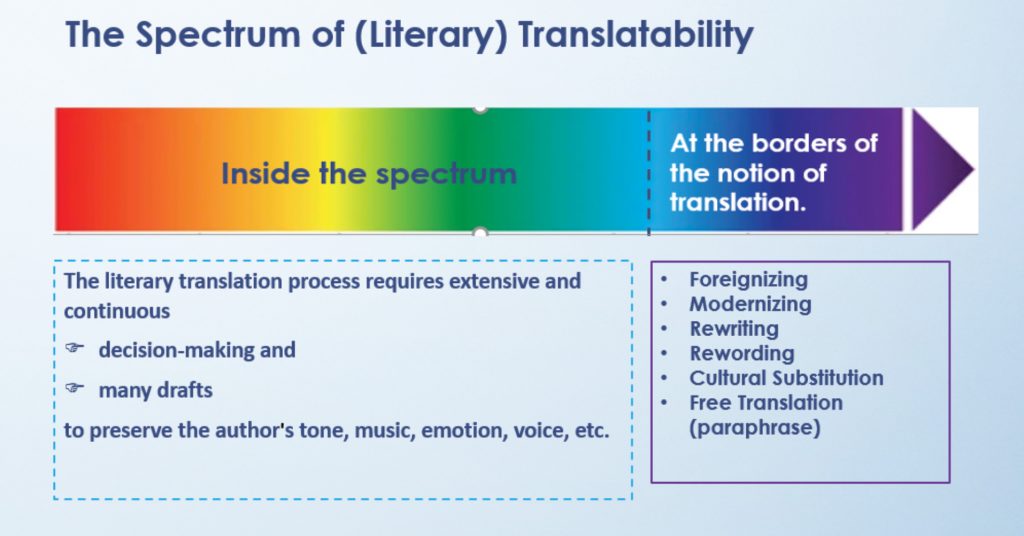 Figure 1: Though subject to overlap between categories, this model illustrates the broad spectrum literary translators must operate within.

To make the voice of a character sound unique or more authentic, authors let them speak with an accent, dialect, or distinct tone. Authors also use specific sentence structures or vocabulary that’s characteristic of the country or region where the narrative takes place. But how can you create the same effect in your translation? The most obvious way to make an utterance sound foreign is to leave parts of it in the original. For example, characters can address one another by their full titles in the source language (e.g., Sergeant Rob Harrings or Monsieur Hercule Poirot). Another strategy is to leave certain conversational interjections in the source language (e.g., “Ach ja,” “Yeah,” “Comme ci, comme ca”). You could also preserve the foreign syntax or sentence structure.

According to David Bellos, author of Is that a Fish in Your Ear? Translation and the Meaning of Everything2, those “selective” or “decorative” foreignisms only work if the two languages and cultures have an established relationship, such as English and German, where the readers are able to recognize conversational interjections and are familiar with expressions of the source language. A way to validate that you have made the right choice for translating the character’s voice is to act like a screenwriter and read the dialogue out loud, making sure it sounds authentic and appropriate.

Names and Places with Intentional Meaning

Sometimes authors give their characters names that have intentional meaning or symbolism. In these instances, you have to get creative and find a way to provide the reader of the translated text with the same reading experience. J. K. Rowling’s Harry Potter series is a great example.3 Besides invented words and cultural references, many of the names she gives to characters and places in her novels have meanings that are central to the plot. For example, the name of the suspicious Severus Snape is derived from severity + snake. To preserve this intention, the Italian translator for the series modified the character’s name to Severus Piton (from pitone, “python”) to express his snaky nature. The French translator renamed him Severus Rogue to capture his arrogance. If these interpretations had not been made, important connotations and meaning would have been lost for non-English-speaking readers. Here are other translations from around the globe4:

Accepting or Compensating for Losses

But what’s the right choice when something doesn’t even exist in the culture of the target language? Literature is filled with houses, trees, and culinary dishes that can only be found in a specific region of a particular country. Italian literary critic, novelist, and semiotician Umberto Eco5 highlights the options translators have in these situations by using the example of a chaumière—a peasant’s small, humble cottage, usually made of stone with a thatched roof.

Though typical in France, a chaumière doesn’t exist in Italy, Germany, or elsewhere. Rather than lose the rhythm of the text or risk a dictionary-like description, you can skip some of the properties or less relevant details of the chaumière while still conveying its visual impression to the reader. You can also opt for a cultural substitution by replacing the chaumière with a type of house that exists in the target culture. Another, yet weaker, option would be to add a footnote or leave the term in the source language and let the reader do the research. As the translator, you must decide if the potential losses that come with an interpretation are bearable for the reader and the plot.

Reaching the Fuzzy End of the Spectrum

In rare cases, sticking too close to the source text will lead to irreparable losses. In his novel The Name of the Rose, Umberto Eco’s character Salvatore speaks a language that consists of fragments of multiple languages, including Latin, Provençale, and an Italian dialect, as a means to protect himself. An example of this intentional Babel effect in Salvatore’s dialogue is: “Ich aime spaghetti.” If an English translator were to translate this phrase as “I like spaghetti,” the Babel effect would be gone, eliminating a vital aspect of the character’s psychology. For translators of European languages with readership who will recognize this mix of languages, the choice is easy: keep the utterance the same. But what should you do if you have to translate this into a target language that has no relation to European languages? Unfortunately, this requires you to entirely rewrite the utterance so that it’s relevant to the respective language and culture. Eco refers to this process as moderate rewriting, which is common with specific forms of poetry or plurilingual texts, such as James Joyce’s Finnegans Wake.6

What makes literary translation challenging is also what makes it interesting. You have greater flexibility in decision making than when translating other text types. Ultimately, you want to provide the reader of the translated text with the same experience as the reader of the source text. A good translation should respect and reflect the author’s style and vocabulary. If the author’s writing is choppy or flowing, it should be reflected in the translation. The same goes if the author’s style is harsh, pompous, flowery, or unambiguous. A good translation should also aim to convey what is written between the lines. However, this doesn’t mean that every single word or phrase you choose has to perfectly resemble the author in style and effect. You have options!

Petra C. Rieker is a freelance journalist and published translator of six works of fiction and translation reference. Specializing in English>German, she is the owner of The Art of German Language, a translation and tutoring practice, and publisher of a blog which explores the nuance of translating creative works (www.TheArtofGermanLanguage.com/petras-blog). She recently completed a four-year term on the board of directors of the Delaware Valley Translators Association (an ATA chapter). She has an MBA from the Otto-Friedrich University in Bamberg, Germany, and is a certified public relations consultant. rieker3199@comcast.net