I just returned from ATA’s 56th Annual Conference—my very first—in Miami, and am so inspired to write about this experience that it itches, almost hurts.

Just to provide some context, I’m a newbie trying to break into the translation world. To me, attending the conference seemed like another way to learn face-to-face. In addition, the prospect of meeting people I had only known online, and others whom I had come to admire through their websites, blogs, and published interviews, was very appealing. 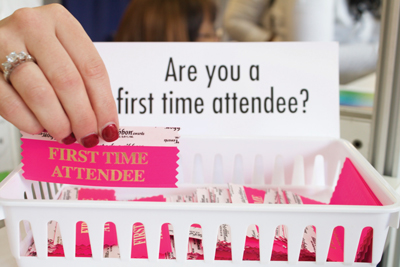 Networking at a professional conference had not been one of my priorities. It might sound untrue, stupid, or at least naïve, but my take on this is that jobs in the freelance world will most likely come from the connections you make through the delivery of good work. While attending a conference can undoubtedly boost connections, it’s not the only way to network. In my case, good work is achieved through the translation courses I’m still taking and the volunteer work I do for the United Nations. (Even though this is not paid work, I treat it with the same importance.) So, I was very excited about attending the conference to learn and connect with people in a new way. I could not imagine what was in store for me.

Some of the memories created during the event will never leave me. Incredible encounters, one after the other. One of them was during breakfast, when a colleague from Iraq sat at my table and opened up about her personal story—so intertwined with the recent history of her country. A few minutes after she left the table (and while I was still digesting what I’d heard), I was joined by a Russian translator who, besides sharing a bit of her personal story and that of her country’s, generously provided some tips that I’m sure will be invaluable in my starting path.

Another memorable encounter was when I gathered all my courage and walked up to a translator whose blog I follow and asked her to be my mentor. Before traveling to Miami, I had planned to approach this individual, but I wasn’t sure whether I would follow through when the time came. Well, I took a deep breath and spoke to her after her first session at the conference. To my surprise, not only did she promptly accept the task of being my mentor, but she welcomed me with a sincere smile. She then invited me for coffee. Our conversation confirmed what I had already learned about her through her texts: she is an incredibly clever, dedicated, and talented professional who takes an ethical and human approach to everything she does. I’m so glad I followed through!

Finally, Jan Fox’s presentation at the Closing Session on Saturday ended the conferences on a high note. Her talk really captured the tone of the entire event: inspiration. I gained so much from the people I met at the conference.

I continue to feel inspired even after my return. Despite being tired, that pain-bordering itch mentioned at the beginning of this testimonial made me jump up from my bed early this morning to transform these thoughts into words. I’m positive that many people will relate to what I’ve shared.

I began to read William Cassemiro’s article, “PEMT Yourself!” (November-December issue), with interest, particularly because several members of ATA’s German Language Division (GLD) had recently written to the division’s listserve about their experiences with post-editing machine translation (PEMT).

While I agree with William in several respects, it is my opinion that his conclusions are personal and express a certain bias that not everyone shares. For example, I agree that translators must adjust to changing technologies and do their best to use them in their businesses. On the other hand, as he points out at a later spot in his article, machine translation does not work well for every type of text and is best suited to technical translation.

My colleagues in the GLD stated that they had tried post-editing. In the process they found that the amount of work involved was not worthwhile for them with regard to the rates offered. This is not an example of being closed to a relatively new professional option. They tried it and found that the negatives outweighed the positives, at least in their areas of specialization and in terms of the present state of MT.

Could this change in the future? Absolutely. But to say that “resistance is futile” and that we must simply accept lower rates for services in the interest of profit maximization on the part of clients is not a point that I can readily accept. Translators and interpreters work very hard to earn a living. Any effort on the part of companies to lower rates should be commensurate with the service provided and time invested. Therefore, in my view, a balanced assessment of the pros and cons of PEMT should include the other half of the equation; that is, the loss of income that this technology may currently generate.

Today many Americans are realizing the existence of an increasingly unacceptable wealth gap. As translators, we are also feeling the repercussions of this downward trend. Thus, I do not accept that MT—or anything else that results in lower wages and potential job losses—is merely “reality,” or that we must make adjustments to something we cannot change. Rather, it seems to me that translators must be actively involved in the business of educating clients about the amount of work involved in PEMT. There has to be push-back against lowering rates as a matter of principle, particularly if the work involved is equal to or greater than translation without the use of MT.

Finally, if the results of MT turn out to have a downside for some end clients, which might be the case in certain instances, then I think it is also important for translators to explain what types of texts are good candidates for MT and which ones would be best translated by a human being from the start.

Response from William Cassemiro
It was really good to read your response to my article. As professionals, we need to discuss this issue to be more aware and prepared to react to changes.

You made some great points with which I agree completely:

When I say “resistance is futile,” I don’t mean that translators “should simply accept lower fees for services in the interest of profit maximization on the part of clients.” What I do mean is that we must see what we can do to take advantage of technology, which really is unstoppable, to make us more productive, not cheaper. And by productive, I mean producing more, with the same quality, less effort, and/or faster.

The central message of my article is that you can use MT on your own, in your computer, with dedicated software, not Google Translate or any other online translator, and not only when a customer, normally a language services provider, asks you to post-edit MT. I want translators to use technology to benefit their own profit margins, their own profit, which is why I chose “PEMT Yourself” as the title. I repeat: we can use this technology to increase our own profits, not just those of the language services provider’s.

Need to Move with Technology

Great article, William! The thing is that as humans, we tend to fear, try to avoid, and resist everything that is different and that we don’t know. From what I can see, it’s not a question of the translation community against technology, it’s a question of what we know/are used to against the new things that we have to learn. But as you said, concerning technology and innovation, there’s no coming back, so let’s go over it!

Praise for The Entrepreneurial Linguist

I just want to let you know how much I enjoy “The Entrepreneurial Linguist” by Judy Jenner. Those columns always share practical knowledge in a fun, engaging style, and they are often the first piece I read in each issue of The ATA Chronicle. I have particularly delighted in the recent one entitled “Mistake of the Year” (November-December 2015).

Because I live in the Southern Hemisphere (Argentina), the Chronicle is my lifeline to ATA. And as long as you keep publishing down-to-earth articles like Judy’s, the Chronicle will be on the right track for me—and I will be grateful for that.