An Interview with Miguel Jiménez-Crespo

Welcome to the second installment of Our World of Words. I caught up with my guest for this episode of OWOW while he was on sabbatical at the University of New South Wales in Australia. Professor Miguel Jiménez-Crespo, who is originally from Spain, is the director of the Translation and Interpreting Program in the Department of Spanish and Portuguese at Rutgers University.1 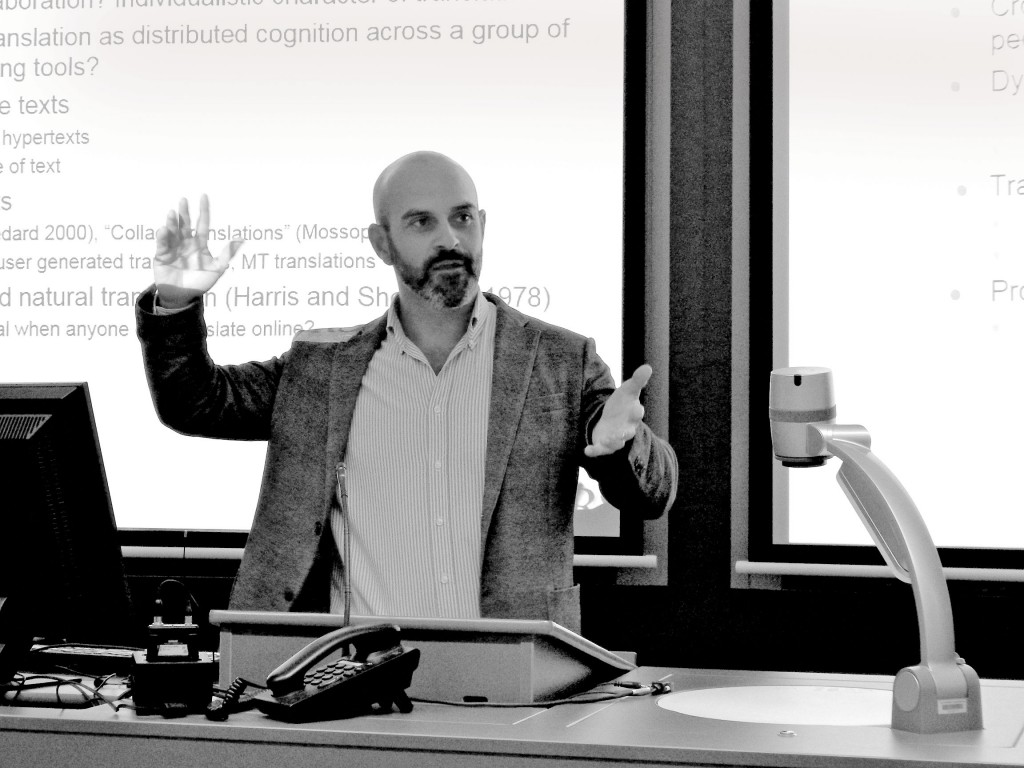 Language has always been my favorite subject. I started learning English when I was 11 and French when I was 13. In the 11th and 12th grades I took Spanish language and literature, Latin, Greek, English, and French.

When I got accepted at the School of Translation and Interpreting at the University of Granada, Spain, we had to have an A language and a B language. Since I already spoke French fluently, I decided to add a third modern language, and chose Russian pretty much randomly because it seemed like a challenge.

I received a scholarship to spend a year at the University of Glasgow during my third year in college, and in my fourth and fifth years I received scholarships to Moscow State Linguistic University. I became fluent in Russian during those last two years. That stint in Moscow was one of the best experiences of my life.

You’re now the director of the Translation and Interpreting Program in the Department of Spanish and Portuguese at Rutgers University. Among other things, your research focuses on translation theory. Does knowledge of translation theory help students after they graduate and start work? For example, is it useful for a freelance translator working on, say, a legal or medical text?

Translation theories and research currently involve a wide range of approaches, but a basic knowledge of the evolution of these theories—from the linguistic equivalence theories of the 1950s and 1960s to the communicative, functionalist, cultural, cognitive, social, or technological approaches of today—can be of great assistance to any translator.2 From my own experience of teaching translation theory, I’ve found that many practicing professionals find it fascinating. Many discover that it allows them to re-conceptualize their long-held approach to translation and interpreting, giving them greater confidence and a deeper understanding of their profession.

Can you learn translation or interpreting on the job and from life experiences, as opposed to studying these disciplines in a formal academic program?

Translating and interpreting in a professional setting is an expert skill that can only be acquired through systematic, structured, and deliberate practice with appropriate feedback. In terms of learning on your own, I would say that you could learn to play tennis or a guitar on your own, but reaching an expert level in this manner would prove extremely difficult (though it can happen with highly gifted individuals). Nobody would suggest that you could learn nursing or surgery on your own or from accumulating life experiences. Nor would anyone imagine that classically trained pianists could learn on their own without extensive and structured practice guided by expert trainers.

Among your research interests you list cognitive processes in translation and interpreting. Briefly, how does the human mind function differently from one of those disciplines to the other?

Cognitive translation and interpreting studies attempt to decipher the workings of what is known as the “black box”—the mind of the translator and interpreter—during the process. It has been a sub-discipline within translation studies since the 1980s and 1990s, inspired by process research based on theories and methodologies from the various disciplines that study cognition.

Since the very beginning, those working in cognitive studies have empirically researched the differences between professionals, experts, students, novices, and bilinguals to discover what exactly translation and interpreting experts can do that novices cannot. This has important implications for training, certification, and quality evaluation.

Translation is considered a “problem-solving” activity. For instance, experts in the field usually automatize a number of tasks and recurring problem-solving routines. When confronted with new challenges, they must employ new problem-solving strategies to find solutions. This means that with the development of translation competence, more and more tasks are automatized and more problem-solving techniques are acquired. Translation, however, does not get any easier with practice. Studies have found that the subjective perceived effort involved in the process can be the same for students and professionals: the so-called “translation does not get easier” phenomenon.3 This is because novices do not usually “see” translation problems, or they tend to solve them quickly and inaccurately.

In your opinion, what innate qualities best equip a student to become a professional interpreter?

There are basic cognitive differences between translation and interpreting that lead some people to prefer interpreting or to perform better in that discipline. Interpreting requires the ability to solve problems quickly, outstanding memory and concentration, an excellent command of both languages involved, an accumulation through practice of a number of solutions for transferring problems and specialized vocabulary, and training in coping techniques to solve basic problems, among other skills. As an instructor, I find that while most bilinguals can, with extensive training, work professionally in community settings, not everyone can easily achieve the level of performance required in advanced fields, such as federal court or conference interpreting. This is due to the demanding cognitive-processing involved in these highly specialized settings.

This is a question that often comes up in workshops. How should a translator handle a poorly written source text?

That depends, and this is where translation theory can help. The short answer is that the translator should communicate with the client about any problems in the source text. In the U.S., there are many people with an MA in writing, so many texts are probably written by someone with an MA or a BA.

Translation and interpreting also require college-level proficiency in both languages. If an English source text is written by someone with an MA in English technical writing but the translator does not have at least an MA, can he or she produce a translation of the same quality as the original? (Here I am just talking about writing, one of the many aspects of the translation process.) Functionalist theories of translation can help solve the problem.

Functionalist theories, which appeared in the 1980s, sought to dethrone the belief that equivalence to the source text was the main criterion when assessing a translation. These theories claimed that the function of the translation, the client’s instructions, and the end audience were the most important aspects. So, if the source text is poorly written but the purpose of the translation is to communicate a message efficiently (i.e., a medical brochure), then producing a quality translation that will achieve the intended goal of helping the audience, without replicating the problems in the source text, becomes more important.4

To discuss functionalist theories in my classes, I use a poorly written text with typos and cultural sensitivity issues related to weight restrictions for a zipline in Costa Rica. Students are asked to produce three translations: 1) one for the owner of the zipline who wants to attract customers from the U.S.; 2) another as an extremely literal translation for a lawsuit against the company; and 3) a third for a late night TV show that attempts to convey the humorous aspects of ziplining. Through this exercise, students are able to grasp the implications of these theories and learn to see themselves as experts in intercultural communication at levels that are far beyond the literal translation of texts.

Where do you think translation and interpreting teaching is going, in terms of style, market demands or pressures, focus, and priorities?

As the need for skilled linguists increases in the U.S., there is a huge demand for highly trained translators and interpreters. This demand is indicated regularly in Department of Labor reports,5 but universities have been slow to catch up with the trend. More and more American universities now offer programs, but in my opinion the demand cannot be met at existing levels. Some language industry niches, such as translation management, are taught at very few universities, such as Kent State University in Ohio and the MA programs at the Middlebury Institute of International Studies at Monterey in California. Very few universities teach court interpreting in their MA programs as we do at Rutgers. We also need more PhD programs to train the next generation of tenured professors to continue defending this field of study from within. Currently, many tenure-track positions in the U.S. are offered to professors trained in Canada or Europe (like me).

Your research has also focused on localization. What are your thoughts on how the U.S. approach to localization is changing as the globalized world becomes more homogenous?

The localization industry actually emerged in the U.S. in the 1980s, when personal computer software developers started selling their products in other countries. This expanded to the localization of websites, video games, and smartphone apps. The most widely used software is the product of U.S. innovation, but nowadays users can have their own localized versions. The most popular websites in the world, such as Google, Facebook, Yahoo, and Twitter, are also the result of U.S. innovation, but they have opened up new participatory avenues for translation through crowdsourcing. Users have translated these sites in creative ways, subjecting the language industry to new waves of disruption.

How has social media affected the teaching of translation and interpreting?

Various modes of social media are now part of our students’ lives. Studies have examined whether having online platforms that resemble social networking sites can help with teaching, or even whether using Facebook or Twitter can enhance students’ motivation and engagement.6 Social media and online reading have also changed how young generations approach a text, shortening their attention spans, which can be a challenge when translations of longer texts are required.

In translation circles one sometimes hears that translation and interpreting professionals do not receive the acknowledgment they deserve. Do you think there is an increasing awareness, and therefore recognition, of the translator and the translator’s task?

Translation and interpreting per se tend to be “invisible” activities, but research in recent years has focused on the concept of “agency,” showing that translators and interpreters are not invisible agents in the process but can, and in fact do, intervene and help create different results.7 Visibility issues are also related to “translator status.” Without a clear acknowledgment of the translator’s “socio-professional status,” compensation for services will not increase. I personally think that the increased availability of translation and interpreting training programs is a key step toward this acknowledgment.

Many thanks, Miguel, for sharing your time and your very interesting thoughts with readers of Our World of Words. See you all next time!

Tony Beckwith was born in Buenos Aires, Argentina, spent his formative years in Montevideo, Uruguay, then set off to see the world. He moved to Texas in 1980 and currently lives in Austin, Texas, where he works as a writer, translator, poet, and cartoonist. Contact: tony@tonybeckwith.com.