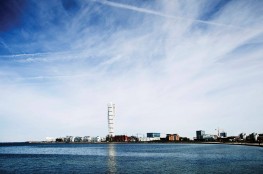 The four countries of the Nordic region (Denmark, Finland, Norway, and Sweden) may have a relatively low combined population at just 27 million, but in the translation industry this region hits well above its weight.

So, in 2016, when several Nordic language associations joined forces to create the Scandinavian Language Associations’ Meeting (SLAM!), it was clear that this was going to be a powerful event. Sponsoring organizations included:

The translator and interpreter associations in the Nordic region vary significantly in size and, of course, by language. Holding a joint international conference in English allows these groups to pool their resources to create a larger event with a broad scope that is more accessible to translators and interpreters throughout the entire Nordic region and beyond.

Similar to the SLAM! 2016 Conference, SLAM! 2018 brought roughly 200 translators and interpreters to the Öresund region on September 15–16, 2018. This region includes the Danish city of Copenhagen, where the opening reception was held, and the southern Swedish city of Malmö, where the sessions were held.

One of the major challenges of a transnational conference like this is handling the cost issues of an event that is held in both Denmark and Sweden, which use different currencies. Like any conference anywhere, the key to success is finding a price-point that will create a quality event that is still affordable for attendees.

And SLAM! 2018 was indeed a quality event, with everything carefully planned down to the final detail. This year’s conference included a new opening reception at the Arbejdermuseet (Danish Workers’ Museum) in Copenhagen. A fun and engaging quiz helped guide attendees through the museum’s various exhibits. After completing the quiz, attendees met in a delightful reception area to eat a delicious array of the famous Danish open-face sandwiches, otherwise known as smørrebrød. The combination of food and challenging questions helped everyone “put on their thinking caps” from the very beginning. 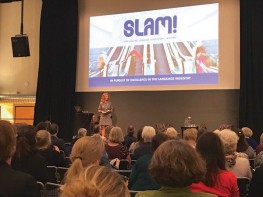 Another benefit of the SLAM! 2018 Conference was that the routine, bureaucratic procedures of the respective associations were not part of the schedule. Instead, the entire conference focused on providing advanced, “high level” sessions that centered on specialist knowledge. The short but robust offerings included everything from sessions on editing, interpreting, marketing, linguistic semiotics, training, standards, and, of course, translation.

True to its theme, “In pursuit of excellence in the language industry,” the conference included a total of 15 sessions aimed at translators, interpreters, generalists, specialists, as well as a variety of other stakeholders. When I asked fellow ATA Member David Friedman, who is also one of the three members of the SLAM! Executive Committee, what the conference theme meant to him, David said he agreed with the words of Kenneth Quek, an ethnic Chinese Singaporean English academic reviser based in Finland who spoke at the conference on editing and revising texts. “It’s about going the extra mile and providing added value,” David explained. “Excellence is a collaborative versus an oppositional effort. The idea is to act as a consultant for your client, co-creating a successful project.”

ATA Member Tess Whitty, an English>Swedish freelance translator and host of the Marketing Tips for Translators podcast, was one of the presenters. Tess says she views excellence in the language industry as a question of professionalism. It’s about curiosity and wanting to learn more. And for Tess, the SLAM! 2018 Conference was very educational. “There’s almost too much variation in this year’s conference. There are lots of interesting sessions and it’s tough to choose,” she said. “Smaller conferences such as SLAM! also make it easier to see people. You don’t have to plan every part of your day like at larger conferences.” 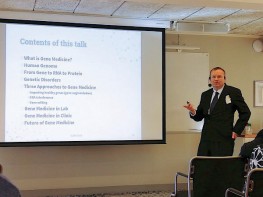 Tapani Ronni, one of many ATA members who presented at SLAM! 2018

ATA was well represented at the conference since five of the 15 sessions were hosted by ATA members. ATA Spokesperson Judy Jenner, a Spanish and German translator and federally and state-certified Spanish court interpreter, hosted the keynote, “Lessons from Business School: The Entrepreneurial Linguist.” Judy also provided a master class on marketing to direct clients on Sunday. Tess Whitty helped members go deep into the process of marketing and how to establish themselves within a specialized field. ATA Past President Thomas West (2001–2003), who has 25 years of experience translating complex legal documents from a number of languages into English, provided a session on excellence in Swedish legal translation. Tapani Ronni, an English>Finnish scientific and medical translator, presented on gene medicine for medical and scientific translators. Finally, I was honored to provide an overview of recent developments within the translation world as a whole.

The final closing session included a talk by ATA Member George Drummond, a freelance conference interpreter for international courts and tribunals in Hamburg, The Hague, and in Munich. George provided a touching and inspiring look at the lives and backgrounds of the interpreters who took part in the Nuremberg trials, which is considered to be where simultaneous interpreting originated. Among the interpreters included in the presentation was 2018 ATA Gode Medal recipient Siegfried Ramler, one of the last living interpreters from these historic trials. 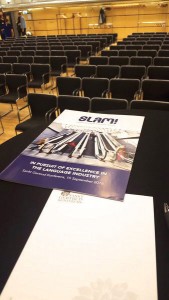 Another highlight of the conference was the actual “translation slam.” Similar to a “poetry slam,” a translation slam involves multiple translators comparing their translations of a single text. In this case, a boilerplate legal/business text was distributed to attendees in advance. Two translators were “in the ring” to have their translations openly compared in front of all the attendees. Jan Runesten, a member of the Swedish Association of Professional Translators and vice president of the European Legal Interpreters and Translators Association, acted as “referee.” The slam proved to be an interesting and engaging exercise.

In addition, an ATA certification exam was held in conjunction with the conference on Friday.

After a full day of serious sessions, attendees could attend a gala dinner that was held at the Malmö Stock Exchange Building (Malmö Börshus), which dates back to 1877. In typical Scandinavian style, attendees feasted on gourmet food, spirited drinks, and energetic dancing.

In two days, the SLAM! 2018 Conference packed an amazing punch. It’s clear that I will be back for the next round in 2020.

David Rumsey is the immediate past president of ATA (2015–2017). In that position, he was in contact with several key players within government and industry and has provided sessions on translation and interpreting at the International Association of Business Communicators, Society for Technical Communication, the Globalization and Localization Association, the U.S. Bureau of Labor Statistics, and U.S. Interagency Language Roundtable. He has been featured on CNBC and PBS’ Nightly Business Hour. Since entering the profession in 1990, he has worked on all sides of the industry, including as a project manager at two U.S.-based agencies, a project manager for localization efforts at a large software firm, and as a freelance translator since 2004 from his home near Vancouver, British Columbia, Canada. Contact: nordictranslator@gmail.com.