The Association’s most recent fiscal year ended June 30, 2018, and, once again, we find ourselves in good financial shape. Annual revenue outpaced annual expenses, we held a very well-attended conference in 2017, and our investments and reserves continued to grow. In short, ATA is firing on all cylinders. 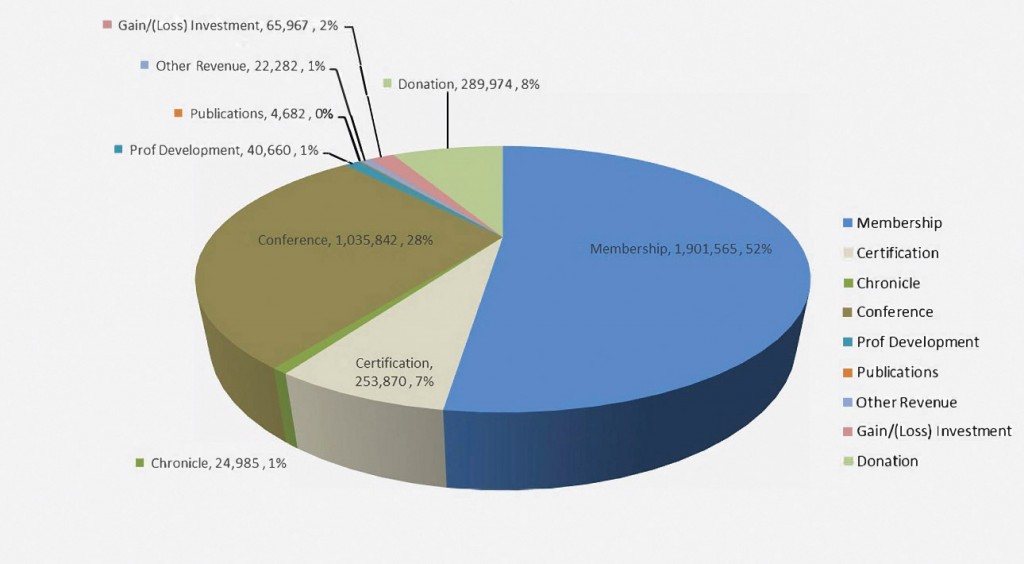 Figure 1: Breakdown of Total Revenue for FY2017–18: ATA has two main sources of revenue—Membership Dues and the Annual Conference—which together accounted for 80% of incoming funds this fiscal year.

Figure 2: Breakdown of Total Expenses for FY2017–18: Our budget includes a wide array of expenses. The Annual Conference is our single biggest outlay, but most of ATA’s money (65%) gets spent on programs, administration, and membership services.

Let’s start with the big picture. ATA’s total revenue for FY2017–2018 was $3.48 million, while total expenses came in at $2.99 million. In other words, we brought in more than we spent. The result is another positive change in net assets (before investment activities) of $486,755 for the fiscal year.

In terms of revenue streams, ATA Membership ($1.90 million) remains our most important source of inflow, followed by the Annual Conference ($1.04 million). While both figures are very good, they remained essentially unchanged from a year earlier, meaning that we are stable but not necessarily growing. In a distant third place, Certification revenue ($253,870) is actually up by nearly 14.3% from last year. This spike, however, is believed to be a response by test-takers seeking to avoid the higher testing fee, which took effect on January 1, 2019. (See Figure 1.)
A few other noteworthy items in the revenue department include:

Of course, revenue is only half the financial story. For a complete portrait of ATA’s financial health, we have to look at how the money was spent.

In terms of ATA’s expenditures, our single largest outflow was the 2017 Annual Conference in Washington, DC: $1.04 million, up 11.8% from a year earlier. Supporting Services (i.e., salaries, administration, officers, volunteers) were next in line at $757,597, rising 9.0%. While salaries and benefits were actually 1% lower than in 2017, General and Administrative expenses came in 13.3% higher, in part because of an adjustment to depreciation.

After that, our next three expense categories each consumed similar, though much smaller, amounts of funds: Certification ($386,784), Membership Services ($272,204), and The ATA Chronicle ($253,947). The most significant increase was in the Certification Program, where expenses were up 16.2%. Grader-processing costs rose across the board as a result of more exams and practice tests, more postage fees, sample translations (up 60%), and database programming fees for online certification. (See Figure 2.)

Getting into a bit more detail in terms of other expenses, we find that:

There is one unusual item on our Statement of Activities (see figures 5/6) that merits special mention. ATA was the beneficiary of a $316,180 bequest (see “Extraordinary Item”) from the Sue Withrow Trust in FY2017–18. This bequest is going to be used to make capital improvements to ATA, including an upgrade to our website and the implementation of association management software at ATA Headquarters to help streamline overall operations.

Taking a closer look at the performance of ATA’s various programs, we see that a few of them generate income that helps defray their costs. Most, however, are funded through membership dues.

Over the past few years, the Annual Conference has not only paid for itself but also contributed to ATA’s bottom line. Certification and Professional Development likewise generate a decent amount of revenue, which ends up covering much of their respective costs. Other programs, though, such as Divisions, The ATA Chronicle, and Publications, are essentially membership benefits.

Our programs’ financial results for FY2017–2018 are presented in Figure 3 above. The yellow-colored section in the bars in the chart represents the gain or loss for each program. For instance, Professional Development brought in $41,000 in revenue, incurred $68,000 in expenses, and thus ended the year at -$27,000, with this difference covered by membership dues. On the other hand, the Annual Conference generated $1.036 million in revenue versus $1.033 million in expenses, for a net gain of just over $3,000 to ATA’s coffers.

Our 58th Annual Conference in Washington, DC, was another successful outing. We brought in $1.036 million in revenue, for an event that had $608,929 in direct costs (before overhead, as discussed below). Overall, there were 1,829 attendees, 344 people who attended Advanced Skills and Training (AST) courses, and 62 exhibitors who paid for 76 booths.

Most conference revenue comes from registration fees, which totaled $838,633 at ATA58. Exhibits contributed an additional $111,985. While a small but growing source of funds came from AST courses ($51,465).

In terms of direct costs, a few items are responsible for most of the conference’s outlays. The hotel model we use to put on this event bundles in rental costs for all the space we occupy—such as the auditorium, lobby, meeting rooms, and the Exhibit Hall—with food and beverage expenses. In DC, this bundle totaled roughly $350,000. The other major direct cost was audiovisual ($96,370).

Of course, an annual conference like ours doesn’t just happen overnight. It takes years of planning, along with the year-round involvement by staff at ATA Headquarters, plus lots of volunteer hours, to pull it off. So, we have to factor in this overhead to get a more accurate picture of the event’s final performance. For ATA58, overhead totaled $423,325.

The upshot is that our 2017 Annual Conference had a total cost of $1.033 million. In other words, we basically broke even, producing a tiny net income of $3,588.

With respect to our longer-term status, ATA remains on very sound financial ground. We continue to add to our assets. Our liabilities have only risen a relatively small amount, and our net assets continue to grow.

Teasing out some of the details in our Statement of Financial Position (balance sheet) for FY2017–2018, the headline figure is the 36.9% increase in Total Assets, from $2.24 million a year ago to $3.06 million this year. (See figures 5/6.) These figures compare favorably against our Total Liabilities, which rose by 13.5% over this same period, from $1.34 million to $1.51 million.

The takeaway is that what ATA holds in cash, investments, etc., continues to outpace what it owes to others. The difference between these two items is our Net Assets, which expanded 71.6% YOY, from $0.90 million a year ago to $1.54 million this year.

Our Investments also remained positive. On June 30, 2017, we had $1.03 million invested in equities and fixed income. A year later, these conservatively managed funds were up 3.7%, to $1.07 million. We also have $1.28 million in cash. All these instruments conform to ATA’s investment policy, which seeks to protect our capital.

In general, these balances have benefited from changes to operations. According to Headquarters, most of ATA’s financial improvement is the result of restructuring The ATA Chronicle, along with a price adjustment to Annual Conference registration and better control of food and beverage expenses (which includes rental space). The resulting bump in cash and equivalents has been transferred into our investment accounts at Merrill Lynch. More revenue and smaller expenses have significantly increased our net assets. Details of our investment allocation are presented in Figure 4 above.

On the Liabilities side of the ledger, things have remained fairly constant. The biggest percentage change occurred in Short-term Payables, which jumped from just $5,707 in 2017 to $80,405 in 2018 due to payment timing issues. Payables are cleared out once checks are issued for payment, but check printing was scheduled after June 30th, which left a large balance at year-end. However, most of the increase in total liabilities over this past year can be attributed to Deferred Accounts, up 9.4%, from $1.23 million to $1.34 million. 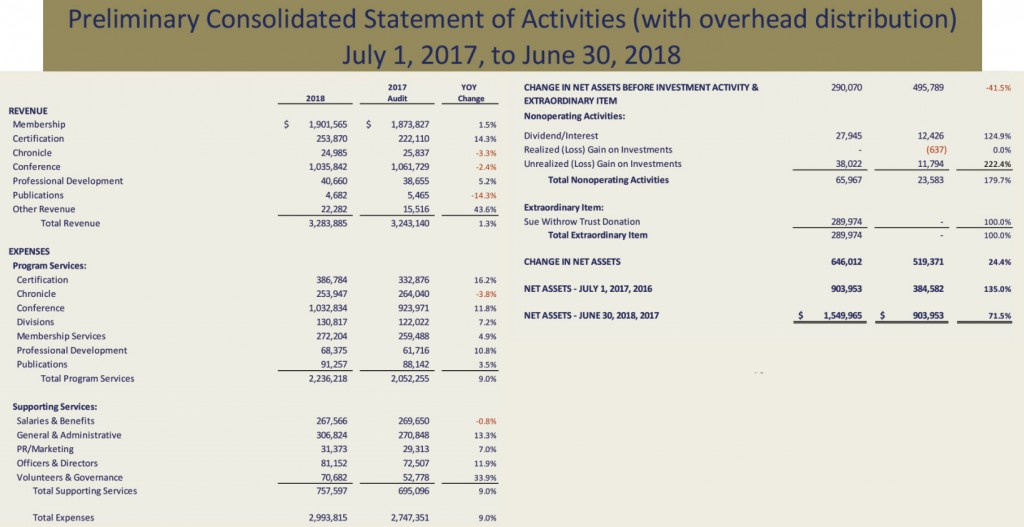 Looking Ahead: ATA59 and Beyond

The final numbers are not in yet from New Orleans, but ATA59 appears to have been another successful conference. Attendance was down from previous years, at around 1,350, possibly because of fewer local translators and interpreters in the metropolitan area. For comparison’s sake, attendance was over 1,800 in both San Francisco and Washington, DC.

Registration generated the bulk of total revenue, with attendees expected to pay an average of $559 each. The next two largest sources of income should come from Exhibits ($115,000) and AST registration ($50,000).

The conference’s direct costs are projected at around $400,000, or 12% less than the DC conference. The biggest expense, as usual, should be food and beverage (rental space), accounting for nearly 75% of that cost. Total expenses, before overhead, are budgeted at $597,000. Our actual expenses in DC, before overhead, were $608,929.

Looking ahead, ATA finds itself in a relatively comfortable financial position for now, but that is no reason for complacency. A number of challenges lie on the horizon. While the language service market as a whole is growing, technology continues to modify the role that translators and interpreters play in it. Consolidation among companies in the sector is affecting market dynamics, and price pressure for freelancers is very real. In addition, many economists are predicting that the next recession is no more than two years away. For all these reasons, continued prudent financial management is a must.

One of ATA’s financial goals is to ensure that we have sufficient funds on hand to cover at least six months of operating expenses. In addition, we need to be able to make improvements to the Association’s technology and overall structure in response to an evolving marketplace. Our decisions in recent years have put us in a favorable position to do so.