The Certification Committee is happy to report here on certification pass rates for 2004–2014.1 Pass rates have remained relatively stable over time, and this is reflected in the 2004-2014 data as well. 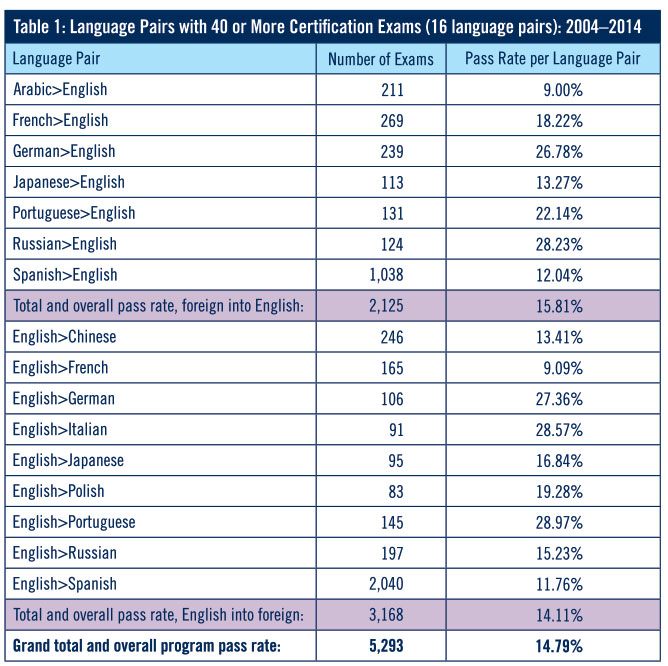 The individual language pairs are listed in Table 1 in alphabetical order with the number of examinations and pass rate for both sets of data.

Thirteen of the 29 language pairs each had fewer than 40 exams. (See Table 2.) The results for these language pairs have been combined in the figures shown in Table 2. This was done because these language pairs cannot be averaged reliably due to their low volume. Another reason is that some languages were not offered for the entire period. The Italian>English language pair was suspended in 2007 and only reinstated in 2015, so it will remain in the ELV category for some time. In addition, Hungarian>English, which had a low volume to begin with, has been suspended since 2008, although work is ongoing to reinstate it.

Figure 1 presents the data on the high-volume languages in 2004–2014 in graphical form, in a format slightly different from previous pass-rate reports. The dashed horizontal red line shows the mean pass rate. No standard deviation is provided for the pass rate percentages because the language pairs have widely divergent numbers of exams. Overall, this figure shows that the pass rates differ for each language pair. The pass rates for the high-volume language pairs range from a low of 9.00% for Arabic>English to a high of 28.97% for English>Portuguese. The average of 35.88% for the aggregated ELV languages (3.11% of all exams) represents 13 language pairs averaging two or fewer exams per year. A slightly higher or lower number of ELV exams passing in any data set can greatly skew the individual average. 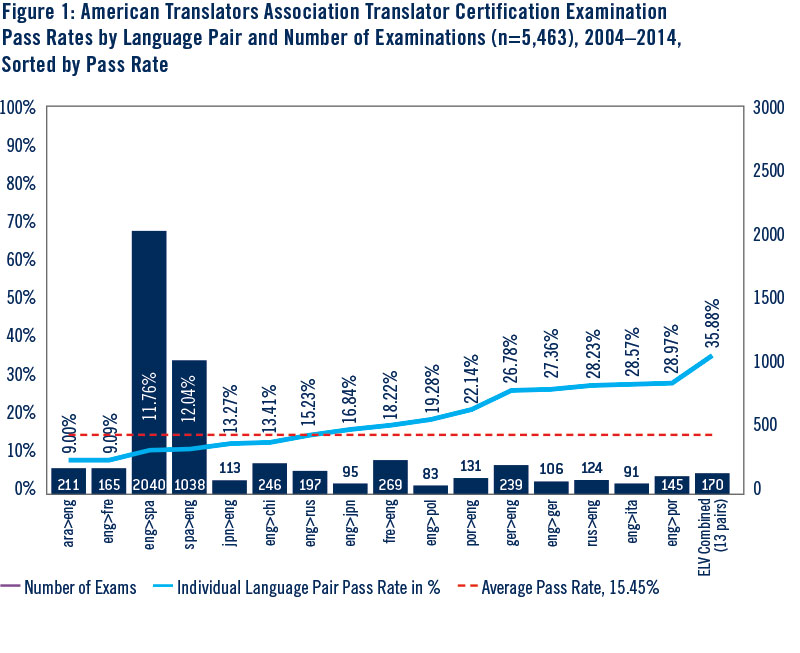 Figure 2 compares pass rates over time using four sets of data (2001–2011 through 2004–2014). The overall pass rate has remained largely stable, with a high of 15.64% and a low of 14.67%. The pass rate for high-volume languages closely mirrors the overall pass rate, just slightly below it, ranging from 15.16% to 13.81%. Not surprisingly, the ELV pass rate is both quite a bit higher and more variable. The shift between the low-40% range in the first two data sets and the mid-30% range in the second two sets is attributable to a few language pairs with moderate pass rates moving from high-volume into the ELV category, pulling the average down. This did not have a noticeable effect on the high-volume pass rate, however, which shows how small the number of ELV exams is in the overall system. 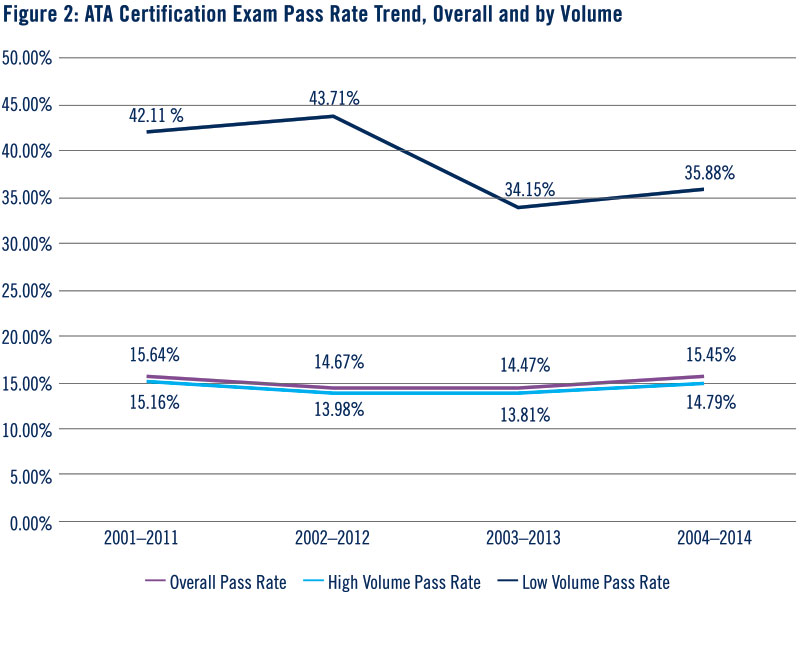 We hope that this information on pass rates is interesting and useful to our members and potential candidates for ATA’s certification exam. ATA’s Certification Committee will continue to report the figures on a regular basis. 

Geoffrey S. Koby is an ATA director and the immediate past chair of ATA’s Certification Committee. He is an associate professor of German/translation studies at Kent State University. Formerly the coordinator of the university’s BS in translation program and assistant to the chair, he teaches undergraduate and graduate courses in translation theory and practice. An ATA-certified German>English and Dutch>English translator, his professional practice focuses on business, legal, and financial translation. Contact: KobyTranslation@yahoo.com.