Don’t Take My Word For It: Some—Admittedly— Rather Random Tips and Tricks in MS Word

Late last year, I was asked to chair ATA’s Translation and Interpreting Resources Committee, whose perhaps most important task is to oversee the publication of articles in The ATA Chronicle related to, well, useful resources (e.g., software, online glossaries, and tips and tricks for working more productively). The committee met at ATA’s Annual Conference in San Francisco and collected a good number of ideas for articles to write or commission. Since these articles are for you and hopefully address your interests, we naturally would be very interested in what you would like to see. If you have any ideas and/or suggestions, please let us know by e-mailing me at jzetzsche@internationalwriters.com.

Today’s topic: MS Word. The vast majority of us use it. Most of us use it well, but virtually none of us to the extent we could. And that may be just fine. There is no good reason to know everything and anything about a program that tries to please everyone. But there are a number of features that are particularly helpful to translators and—especially—editors, so I’ll be covering some of those. (And, no, I’m not going to talk about the Word-internal machine translation feature.)

Let’s start with languages that are available for grammar- and spell-checking. In earlier versions of MS Office (up to version 2010), you had only a very limited number of pre-installed languages (up to seven, depending on the base version). After that, you had to purchase packages for individual or all available other languages.

Starting with Office 2013/365, this finally changed for good to what it really should have been in the first place: grammar- and spell-checkers are now freely available for all (supported) languages. That’s great, but it’s made even better by the fact that you’re asked automatically whether you want to install a new language once it’s detected in your text. (If you find the reminders annoying, you can disable them under Options> Language.)

Surely there is no editor who is still unfamiliar with Word’s Track Changes feature. It would probably not be an overstatement to say that MS Word’s method for tracking changes has become the quasi-standard way to track and mark-up revisions,at least in our industry, and many translation environment tools have now implemented an almost identical feature.

There are some things that make the way Word handles Track Changes more advanced than it looks at first sight.

I particularly like the Simple Markup feature that was introduced in Word 2013. Here you can show the location of markups (indicated with a red line in the margin) without showing all the markups in the text detail, which, as we all know, all too often makes a document virtually unreadable. (See Figure 1.)

Another helpful feature in Word allows you to activate a warning that will come up when you are about to print, save, or send a file that contains tracked changes or comments. This is particularly useful for avoiding the embarrassment caused by sending documents with change-tracked data that was not supposed to be seen by anyone but you, or the frustration over wasting time printing a document and forgetting to turn off tracked changes, thus making it virtually unreadable. You can activate that option under Options> Trust Center> Trust Center Settings> Privacy Options. (See Figure 2.) 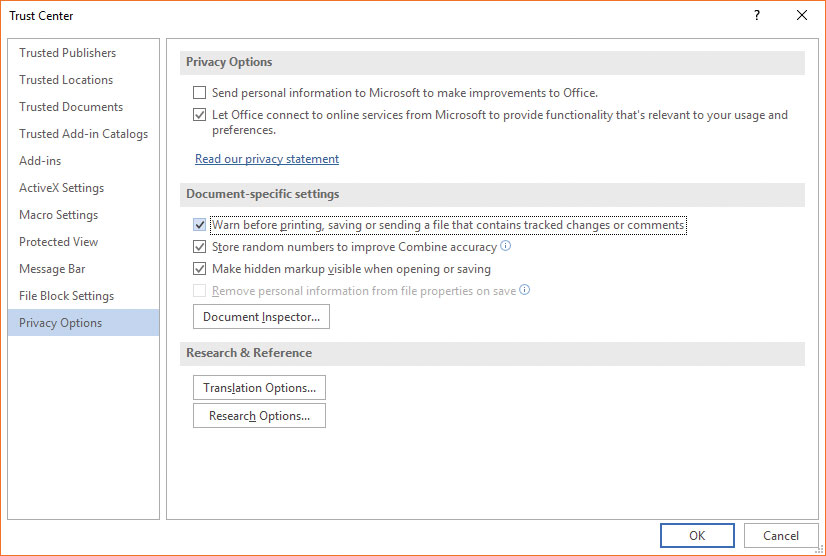 If you do want to send a client a document that contains tracked changes, but you don’t want him to see who did it or when it was done (I’ll leave it up to your imagination why that might be helpful), you can delete that personal information. In Office 2007 and above, select File (or the Office button) and then choose Prepare (or: Check for Issues)> Inspect Document.

In the dialog box that shows up, select Document Properties and Personal Information and click on Inspect. You’re shown which kind of personal information was found, and you can now delete all that information. You don’t need to worry that comments and tracked changes themselves will be deleted. Only the name of the person who committed those edits is changed to “Author” and the time stamp is deleted. (See Figure 3.) 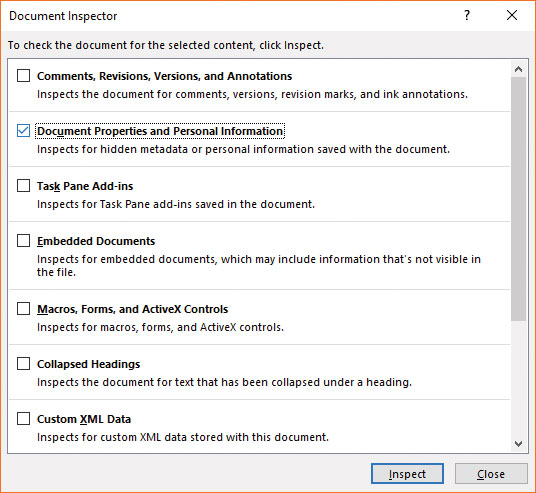 If you were supposed to have tracked your changes and just forgot, rather than doing it from scratch, you can essentially get the same result (minus the correct time stamp) by “comparing” documents. (Select this feature on the Review ribbon tab in current versions of Word.)
If you want to visually compare two versions of one document side-by-side, it’s also possible to scroll through two texts simultaneously. This feature is accessible under the same Compare group in the Review ribbon tab.

And while we’re talking about reviewing documents (in Word), we all know it’s helpful to change the appearance of a document when we switch from translating to editing to make errors stand out more easily—especially when editing our own translation. If you work in a translation environment tool, it’s generally easy to achieve that by changing the font. However, this is often not a good idea in Word, especially if this is the copy of the document you’ll have to deliver to the client. But there is another way to achieve a similar effect without changing the document itself.

Remember the early versions of Word (up to 2003) that had a DOS/WordPerfect emulation mode that allowed you to change the screen to blue and the font to white? For some reason it was dropped from Word 2007 on, but from Word 2013 on something similar was silently re-introduced. Just select View> Read Mode, and in the Read mode select View> Page Color> Inverse. Those typos will now scream out at you! (See Figure 4.) 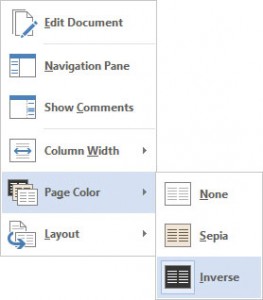 If you’re editing a very long document and forget where you last changed something, press Shift+F5 to jump right back to where you last were. (Another way to achieve something similar is Word 2013’s integrated feature that asks you whether you want to jump back to the place you last viewed when opening a long-ish document.)

I would be hard-pressed to make a good case for why this next tip is of particular benefit for a translator. It’s not. But I think it’s cool anyway.

Sometimes it’s helpful to Find and Replace something, but leave the original text untouched. A scenario where that might be helpful is if you’re working on a table where names are listed with the family name first, followed by a comma, followed by the given name. For example:

If you want to sort this into a list with the first name followed by the given name, press Ctrl+H to open the Find and Replace dialog box in Word, select the More button to open up the extended options, and select Use Wildcards. You can then enter the following wildcard characters.

What does that mean?

The result will be this:

Told ya—it’s cool! (For more Find and Replace text or formatting tips for Word for Mac, go to http://bit.ly/2hm7Wtd.)

But probably more helpful for translators and editors are tips on how to deal with copying and pasting.

We all know the Format Painter, the little paintbrush icon that allows you to copy formatting information and paste it to your next selection. You can also use keyboard shortcuts for the same process: Ctrl+Shift+C to copy and Ctrl+Shift+V to paste. The difference between using the shortcuts and clicking on the icon is that Word “remembers” the formatting information for more than one paste action when you use your keyboard (you can achieve the same result by double-clicking the paintbrush icon).

This is also a helpful keyboard shortcut to paste something. It opens a dialog box that gives you access to paste content in various formats, including unformatted text, which sometimes can be very helpful when pasting text from other sources, such as webpages or PDF files.

And lastly, since we’re talking about unformatted text, one of the most helpful shortcuts in Word has to be Ctrl+Spacebar. This gets rid of all the text formatting you selected.

Of course, for regular copy and paste processes you already use Ctrl+C to copy and Ctrl+V to paste, but one of the problems with that is it uses the regular clipboard and overwrites the last copied item. One way of circumventing that is to use the Office Clipboard, which simultaneously holds up to 24 different items (you can open the Office Clipboard by selecting the little launcher icon in the lower-right corner of the Clipboard group on the Home ribbon tab).

Another way to copy and past items is by using the delightfully prehistoric “Spike” feature, named after the equally old-fashioned and painful-injury-causing paper holder that resembled a long upward-facing nail onto which papers were impaled. Unlike the traditional copy and paste, Spike doesn’t use the clipboard, so it doesn’t overwrite any potentially valued content you might have sitting there. To use it, select some content (text, graphics, etc.) within a Word document, press Ctrl+F3, put the cursor in the document where you want to move the content, and press Ctrl+Shift+F3. This results in the old instance being deleted and transferred to the new location.

Once you do that, your spiked content is not available anymore (which means you can’t place it elsewhere). If you want to place it in more than one position, you’ll need to type “spike” in the desired new location in the Word document and press F3. That will position the Spike content without “losing” it for further use. (Yes, you’re right, this last one sounds like the ultra-nerdy shortcut—feel free to forget it right away, unless, however, you want to impress your otherwise-so-much-more-tech-savvy-than-you kids or other relatives.)

Oh, and to bring it back to where we began, one of the benefits of using Spike is that, unlike copy and paste, it keeps all your Track Changes intact in the transferred content.

Remember, if you have any ideas and/or suggestions regarding helpful resources or tools you would like to see featured here, please e-mail me at the address below.

Jost Zetzsche is chair of ATA’s Translation and Interpreting Resources Committee. He writes the “Geekspeak” column for The ATA Chronicle. He is also the co-author of Found in Translation: How Language Shapes Our Lives and Transforms the World, a robust source for replenishing your arsenal of information about how human translation and machine translation each play an important part in the broader world of translation. Contact: jzetzsche@internationalwriters.com.