R (risk) and S (safety) phrases occur extensively in chemical documentation. The following explains their origin and set wording, along with their successors—the H (hazard) and P (precautionary) statements.

Numbered R-phrases (risk phrases) and S-phrases (safety phrases) are among the most ubiquitous text units encountered in chemical documentation. Although they appear frequently, many translators are unaware of the official set translations that employ established and accepted terminology. This article will cover risk and safety phrases within the context of the standardization bodies working on them and point to resources for the terminology in European languages.

What are R and S Phrases?

Risk (R) and safety (S) phrases are statements of 1-16 words that are used to describe the risk and safety aspects of hazardous substances. The wording is standardized in each language (and sometimes country-specific). Each phrase is associated with an identifying letter-number code for brevity (e.g., R1 through R68; S1 through S64). These phrases were initially developed by the European Coal and Steel Community (ECSC), and further modified and the list expanded by the European Union (EU). The list has been incorporated into official notifications, links to which can be found in the resources sidebar on page 26. These phrases appear in Material Safety Data Sheets (MSDSs); chemical, analytical, and manufacturing procedures; cargo statements; product brochures; customs declarations; and many other documents related to commercial chemicals.

Examples in English include:

Where Did R and S Phrases Originate?

As stated previously, these phrases can be traced back to the European Coal and Steel Community (ECSC). The ECSC was the administrative agency established by a treaty ratified in 1952, designed to integrate the coal and steel industries in post-WWII Western Europe. The original members of the ECSC were France, West Germany, Italy, Belgium, the Netherlands, and Luxembourg. The organization subsequently expanded to include all members of the European Economic Community (later renamed the European Community) and the European Union (EU). When the treaty expired in 2002, the ECSC was dissolved.

In 1957, the ECSC issued a list of commercial chemical substances and a set of safety phrases in the four languages of the member states: German, French, Italian, and Dutch. (Note that English played no role at that point!) These phrases were to be included with the packaging of commodities that moved between member states to describe the potential risks and provide safety advice regarding dangerous substances and preparations (e.g., risks: Gefahren/risques/rischi/gevaren; safety: Sicherheit/prudence/prudenza/veiligheid).

Well before the ECSC fully segued into the EU in 2002, it was developing as a proto-EU with more affiliated nations.

In 1967, the European Economic Community revised the legislative bases for safety labeling requirements. Directive 67/548/EEC defined seven types of hazards and provided the R and S phrases for use on product labels in five languages, including English.1 For example, R5 was officially worded as: 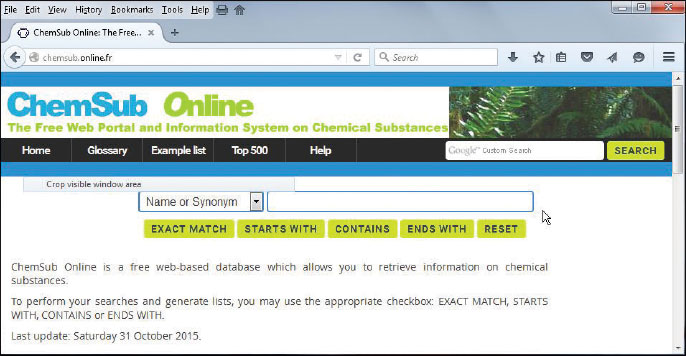 The scope, content, definitions, and other provisions of these requirements were consolidated and expanded in EU Directive 2001/59/EC,2 and updated further in EU Directive 2006/102/EC.3 This latter version defined 21 categories of substances and 10 categories of hazards, complete with identifying symbols and pictograms. The geographic and linguistic scope of the EU had also expanded by that point, and R and S phrases were specified for all official languages (22 at that time). For example, R10 (Flammable) was rendered as:

Of course, the chemical substance trade is international and extends far beyond the EU. Nations outside the EU adopted/adapted/generated R and S phrase equivalents in their respective languages to facilitate commerce. For example, R23 is rendered as:

Where Are R and S Phrases Found?

As an example, a portion of the label for a glyphosate-based herbicide produced in the U.K. bears the following R and S phrases:

R38: Irritating to skin
R51/53: Toxic to aquatic organisms. May cause long-term adverse effects in the aquatic environment
S2: Keep out of the reach of children
S13: Keep away from food, drink, and animal feeding stuffs
S20/21: When using, do not eat, drink, or smoke
S25: Avoid contact with eyes
S26: In case of contact with eyes, rinse immediately with plenty of water and seek medical advice
S57: Use appropriate containment to avoid environmental contamination
S35: This material and its container must be disposed of in a safe way

Sometimes the phrases alone are used, sometimes only the letter-number codes, but often both are present. Some of the phrases frequently appear in combinations, such as R51/53 and S20/21 above. Occasionally one finds differences in punctuation, but these phrases should always be used in the standard forms for the respective languages. In other words, they should appear word-for-word as they appear in the original list.

In many cases, the phrases are linguistically equivalent across languages; that is, each would be considered the obvious translation by a technical translator who is familiar with the subject matter. However, in some cases, and for reasons best known to the members of the working groups who derived the official forms, the sense of meaning seems different to some extent. Regardless, a translator who comes across the phrase in a source document should always provide the official form in the target language, even if it seems to be an imprecise translation.

One example is the phrase R15 in German, which is Reagiert mit Wasser unter Bildung leicht entzündlicher Gase. This could be translated into English literally as “Reacts with water to form readily flammable gases,” but the standardized English form of R15 is “Contact with water liberates extremely flammable gases.” The two English versions are roughly equivalent, but only the latter is legally correct.

In another example, R33 in Japanese is くりかえし蓄積すると危険なもの, which could be translated into English literally as “Repeated accumulation is hazardous.” However, the standardized (and legally correct) form in English is “Danger of cumulative effects.”

In these cases, a translator who provides a literal translation, or who translates the meaning of the source according to his or her professional preference, will be doing the end client a disservice if the target phrase differs from the standard form.

What are H and P Statements, and Where Do They Originate?

As can be seen from the discussion so far, the evolution of R and S phrases has followed a winding course, formulated by national government working groups (e.g., the national and Union-wide working committees within the EU, and the Occupational Safety and Health Administration in the U.S.), often as a reaction to, or revision of, what has gone before.

In the background, a separate effort within a UN framework had begun as early as 1992 to harmonize and supersede the extant separate systems used in the European Economic Community, the Americas, and other regions of the world on a global basis. The result was the Globally Harmonized System of Classification and Labeling of Chemicals, or GHS for short. To avoid the appearance of this effort being a further grafting of modifications onto the original R and S phrase stock, the new system was organized around H (hazard) statements and P (precautionary) statements. 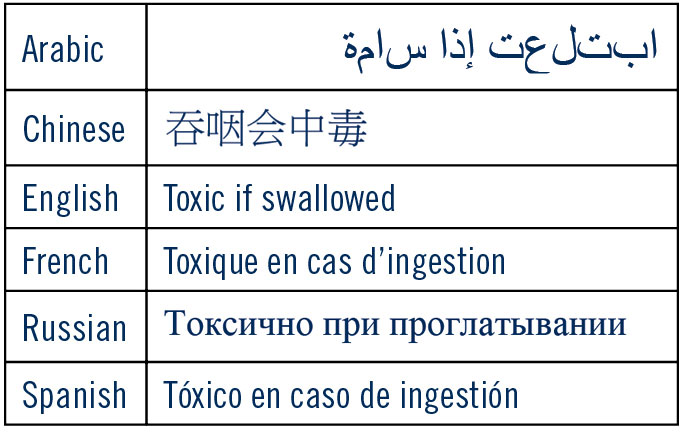 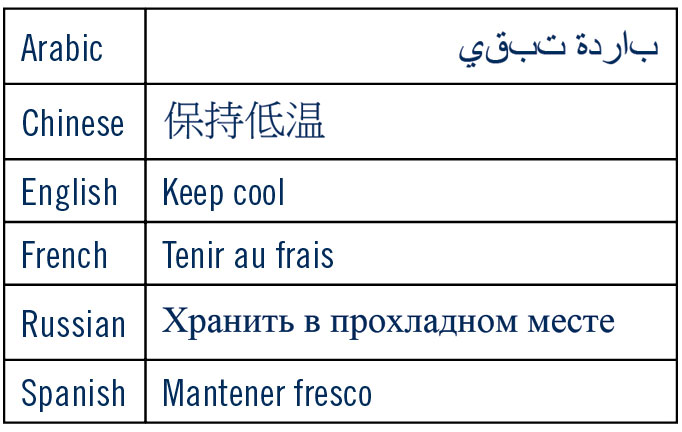 The GHS has been updated every two years since 2003, and final (voluntary) adoption timeframes differ by country. For example, Mexico published its national implementation of the GHS on October 9, 2015, as an alternative to the national system. The final adoption for the U.S. officially occurred on June 1, 2015. Of course, as with many declarations and directives by the UN, compliance is optional and is highly variable in practice. 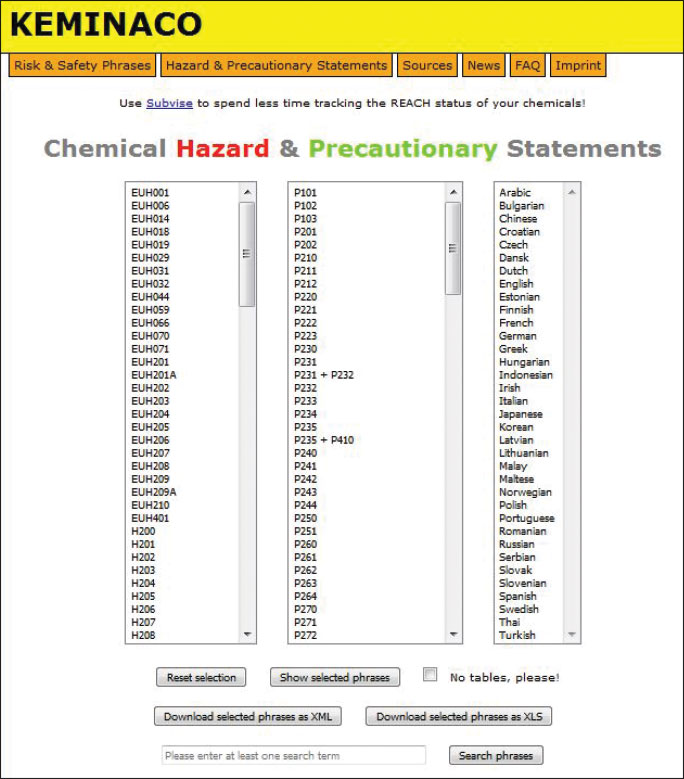 Figure 2: Online resource for R and S phrases and H and P statements

In 2008, the EU homologated the GHS system into its new Classification, Labelling and Packaging (CLP) Regulation. This EU regulation appended a set of “EU-H statements” (EUH 001–EUH 401), which are essentially substitutes for R phrases that were not represented among the H statements present in the GHS. My best guess as to why they were not represented is that the UN working group decided that some phrases could be retired due to perceived redundancy or possibly inaccuracy, but that the EU working group didn’t share that perspective.

In North America, the U.S. has incorporated the GHS system into its Occupational Safety and Health Administration (OSHA) regulations. In Canada, the GHS is being implemented through the Canadian Centre for Occupational Health and Safety (CCOHS). In Mexico, the GHS has been incorporated into the Norma Oficial Mexicana (NOM), a set of mandatory technical regulations, and the Norma Mexicana (NMX), the official standards.4

A comparison of the wording in a few examples of the Mexican Spanish versions of the statements with those from the EU (i.e., Spain), with reference to the English version, showcase how the same meaning is conveyed in a different form in regional language variants.

R and S phrases and H and P statements are standardized text strings that describe the properties of commercial chemicals and ingredients. The H and P statements are officially standard now, but R and S phrases still turn up. They are found in many contexts related to international and domestic chemical product commerce. These phrases/statements belong in your translation memory (TM), since they are set translations that should be used only in the standard forms. The source- and target-language phrases can be used to build a TM that can then be incorporated into larger projects or client-specific TMs. This would be done by taking the list of phrases in the source language, and then going through the translation process using a computer-aided translation (CAT) tool and using the official versions to input the target-language portions of the translation segments. In cases where you are dealing with confidential information, this process could be done separately to create a TM “add-on” that could be incorporated into a TM that might be kept confidential for use with a particular client.

Here are a few important facts to keep in mind.

Hopefully this basic overview will give you a better idea of how these phrases work and their place in documents for translation.

I would like to acknowledge the extensive assistance of Salvador Virgen (chemical engineer and ATA-certified English>Spanish translator).

Matthew Schlecht is a chemist and scientific and medical translator who works into English from German, Japanese, French, and Spanish. His main areas of expertise are chemistry, medicine, and pharmaceuticals. He spent 20 years in academia and industry as a researcher in chemistry and the life sciences. He left research in early 2002 to begin a freelance practice in translation, editing, and writing. Contact: mattschlecht@wordalchemytranslation.com.