Translators without Borders: A Community Translating to Save Lives

Translators without Borders is more than a nonprofit: it’s a community. Learn how over 3,000 volunteers use their language skills to help in humanitarian work, as well as how you can get involved!

Some translation humor was making the rounds of the Internet a while back. Underneath a picture of an empty roll of toilet paper was the caption, “Translation is like toilet paper. No one thinks about it until they need it.”

Being invisible is not just a problem for our profession, however. It’s also a problem in virtually every international humanitarian crisis. Worst of all, it’s a problem that costs lives. As the founder of the language charity Translators without Borders, I have seen first-hand how critical translation is to humanitarian work and how often it is that “no one thinks about it.”

I can’t say that I founded Translators without Borders to raise awareness of the need for translation. I founded it to support humanitarian work.

It started with Traducteurs sans frontières, a much smaller French charity that was the precursor to Translators without Borders. In Paris in 1993, Medecins sans frontières (Doctors without Borders, which would go on to win the Nobel Peace Prize) asked my French translation company, Lexcelera, to provide a price estimate for one of their projects. Instead of giving them a quote, I told them we would do the work for free—as long as they used the money they saved to help more people.

This was the beginning of Traducteurs sans frontières, which I founded with my partner, Ros Smith-Thomas. Over the next 17 years, Lexcelera provided pro bono project management to support a community of professional translators around the world who assisted humanitarian organizations—including Medecins sans frontières, Action Against Hunger, Ashoka, and Handicap International—through the donation of around a million words annually.

When the earthquake struck Haiti in 2010, so much translation was needed that a million words suddenly seemed like a drop in the bucket. Not only could we not cope with the volume, but the requests for translation came in so quickly that we were unable to respond in the near real-time that was needed. Over a thousand translators contacted us each week, wanting to help alleviate Haiti’s misery by donating their skills, but we just didn’t have the capacity to take that many volunteers all at once.

When Communication Is Aid, Translation Matters

In a crisis, information is aid. How do I protect myself and my family? Where is it safe for us to go? Where can we find food, water, and shelter? Haiti taught us that what people need most in a disaster can be the one thing that is in shortest supply: information in their own language. In the words of Rebecca Petras, program director for Translators without Borders: “Following a crisis, one of the most immediate priorities for both relief workers and victims is disseminating and receiving information, yet language barriers frequently complicate response efforts.”

Mobile technology changed all that, with even the very poor more likely than not to have access to a mobile phone. In Haiti the cellphone towers were restored early on, so cellphones were used en masse to seek help. During the first six weeks following the earthquake, 40,000 messages were received at a national call number set up to coordinate aid. Survivors texted for help to dig others out of the rubble, to ask for food and water, and to find loved ones.

The messages were in the language mostly spoken by the poor—Haitian Kreyol. Unfortunately, this was not a language understood by most of the rescuers. Haiti was the first crisis that made me aware that communication had to happen in the local languages.

Haiti showed me that I had to change the organization if we were going to be of any use in a crisis. We needed to scale up with more volunteers offering more languages. (Until then, we had only been translating to and from a handful of European languages.) We also needed to speed the process by automating project management.

To prepare ourselves to be better able to respond the next time a crisis hit, I founded a new organization, Translators without Borders, as a registered U.S.-based charity, and I assembled a board of directors of translation industry experts to help. (We maintained our focus on translation, though there’s certainly an equal need for interpreters.)

The first two goals of the new organization—to raise awareness of the importance of translation and to support humanitarian work through the donation of translation services—were achievable with the infrastructure we set up. The third goal—to increase access to critical knowledge by breaking down language barriers worldwide—is more of a long-term “moon shot” goal.

One of the first actions of Translators without Borders was to team up with ProZ.com, which donated a project management platform and a full-time project manager, Enrique Cavalitto. This allowed us to scale up our efforts almost immediately. The community of translators grew, and they were able to donate their time to help many more organizations. This number has grown to 490 charities today, including Partners in Health, Kiva, Zafèn, Good Planet, and Oxfam, all of which are supported by more than 3,000 Translation without Borders volunteers. 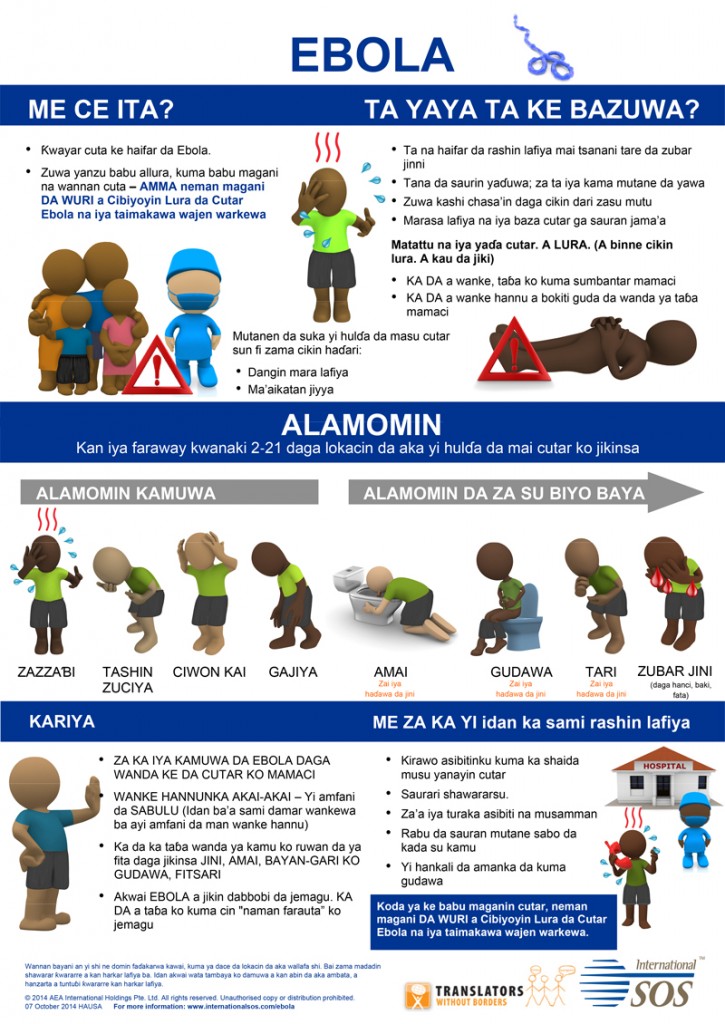 Ready for the Next Natural Disaster

The devastation wrought by the typhoon in November 2013 was exacerbated by the erroneous belief that “everyone speaks English.” Fully 90% of Filipinos speak one of the Philippines’ 175 indigenous languages, yet when Typhoon Haiyan was barreling toward the islands, warnings about a “storm surge” were issued in English. And those very words failed to prepare the Cebuano and Waray-Waray speakers for 50-foot-high waves.

It was primarily the poor who perished in their coastal homes because they were the ones least likely to speak English.

Once the recovery effort began, Translators without Borders was able to work through partners like StandbyTask Force and Humanity Road to translate critical messages from survivors. In one case, a mother in a shelter gave a hand-written note in Tagalog with the whereabouts of her children. In the past that message might have been discarded because the rescue team wouldn’t have been able to understand it, but this time, Noemi, a volunteer, was able to translate it. The two children were rescued and reunited with their mother.

More recently, Translators without Borders was called in to help in the aftermath of the April 25th earthquake in Nepal. The rapid response team, composed of more than 25 professional translators, worked to ensure that local people affected by the disaster were able to access accurate and understandable information. 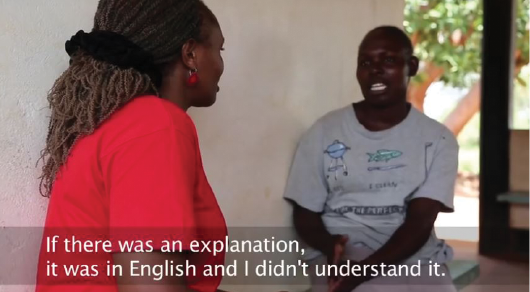 Screenshot from “Translation Matters: The Story of Our Work in Kenya.”
Watch the video at: http://bit.ly/TWB-Kenya.

Ebola: A Crisis of Translation

While Nepal, Haiti, and the Philippines experienced natural disasters where human suffering was exacerbated by language barriers, the Ebola epidemic of 2014 was a man-made disaster exponentially worsened because language barriers weren’t given proper consideration.

The key takeaway from last year’s Ebola crisis was that ignorance about the virus was as fatal as bodily contact with an infected person. People at risk needed to know how to prevent infection and what to do if someone around them caught it. Communicating this information was a key strategy to halting the epidemic. The problem was that, unbelievable as it may seem, most information about how to prevent the spread of Ebola was not available in the languages understood by the people at risk.

In Sierra Leone, the use of English is limited to the educated minority. Similarly, in Liberia, despite the fact that it was founded by freed American slaves, only 20% of the population speaks English. Untranslated posters, flyers, banners, and billboards aimed at educating the public were, in fact, educating the minority elite, the ones who spoke English. For the vast majority of West Africans, information provided in English was of no more use than French would have been in the U.S.

Clearly, the message didn’t get through to the people most likely to be infected and to become, in turn, carriers of Ebola. Making sure information was in the culturally appropriate language would also have helped build trust. Messages in English that “Ebola is real” didn’t dissuade people from believing that it was a government plot, including a group of young men who raided a quarantined clinic in Monrovia last August, stealing the blood-stained mattresses and sending 20 infected patients into the community.

During the Ebola crisis, Translators without Borders worked to raise awareness that, without translation, crucial information was not being communicated, thus prolonging the misery and increasing the number of deaths. When we felt that it was taking too long for the aid community to react, we started translating posters and videos and short message service (SMS) announcements into the leading local languages, including Krio, Temne, Hausa, and Swahili.

As Claudia Evers, Médecins Sans Frontières’ Ebola emergency coordinator in Guinea, said: “In the first nine months, if people had been given proper messages, all this could have been prevented.”

Our volunteer community has grown tremendously since our early days as Traducteurs sans frontières. We have around 3,000 active volunteers who translate professionally yet still find time to donate their services. We’ve expanded to 104 language pairs and now support over 490 nonprofits, including Oxfam, Kiva, and Save the Children. Thanks to ProZ.com, we’ve been able to automate the project assignment, which has increased our speed and responsiveness dramatically.

Besides our core work in European languages, we now take on projects ranging from subtitling health videos in dozens of Indian languages to pre-translating disaster messages in Swahili and Somali. To increase capacity in local languages, we have piloted a training center in Nairobi, Kenya, where we currently train local translators.

The result of this is that, as I write this, the Translators without Borders website donation counter has reached 27,538,057 words. That’s over 27 million words donated to global aid organizations since 2011. This includes over four million words of health articles for Wikipedia into European, African, and Asian languages (our “moon shot” goal of increasing access to knowledge).

If you would like to volunteer, either as a translator or in another capacity, you can visit the volunteer section of www.translatorswithoutborders.org. If you are an ATA-certified translator, mention this and you will not need to complete the exam. Once you have been accepted as a volunteer, projects in your language pairs may be proposed. Needs for certain languages are very strong, such as French<>English and any African languages. Generally the requests are for 1–10 pages, and turning down projects you don’t have the time or specialty to take on is perfectly acceptable. The system is semi-automated, so you can specify whether you want to continue receiving information about projects in your languages. (Please see the box below for more information.)

Translators without Borders also needs people to fill other positions, such as project managers and editors, and just about any other role you would find in a nonprofit.

Of course, many people prefer to donate money to charity, and that’s important too. However, Translators without Borders is built on a model similar to that of the legal profession, where sharing your skills with the less fortunate on a pro bono basis is the norm. The thousands of Translators without Borders volunteers just might say that giving their professional skills rather than their money (or in addition to their money) just feels better. 

Lori Thicke has worked in languages for over 20 years. She founded Lexcelera, a translation company, in 1986. In 1993, she co-founded Traducteurs sans frontières to provide pro bono translations to support global aid work. In 2010, she founded Translators without Borders, now the world’s largest community of humanitarian translators. She is a frequent speaker and blogger on the issue of fighting poverty with information in the right language. She has an MFA from the University of British Columbia. Contact: lori@translatorswithoutborders.org.