We are making progress on improving our financial situation, but we still have far to go. Our overall financial performance in FY2014–151 (fiscal year from July 1, 2014 through June 30, 2015) improved greatly compared to the previous year. We ended the year with net “operating income” (change in net assets from operations) of just over $38k (previous year: net loss of $42.7k). Our investment income of $3.7k increased “net income” (change in net assets) for the year to just over $44.4k (previous year: $132).2

Conference expenses for Chicago, on the other hand, increased more than expected. They came in $98k over budget (before overhead) at just over $841.6k (before overhead), and at just over $1 million, including overhead allocations (+43%), for a net loss on the conference of $161k. Total costs of the division and membership services programs saw large increases due to greater staff time allocated to these programs, with division costs rising to $122k and membership services increasing to $253k. The Chronicle posted a minor increase in costs of just 4.5% to $506k, while the Certification Program showed a slight decline of 4.6% to $315k. Publication expenses (not Chronicle related) rose 11% to $88k, and professional development expenses increased by 18% to $62k. Total expenses for program services rose by 21% to $2,348k. 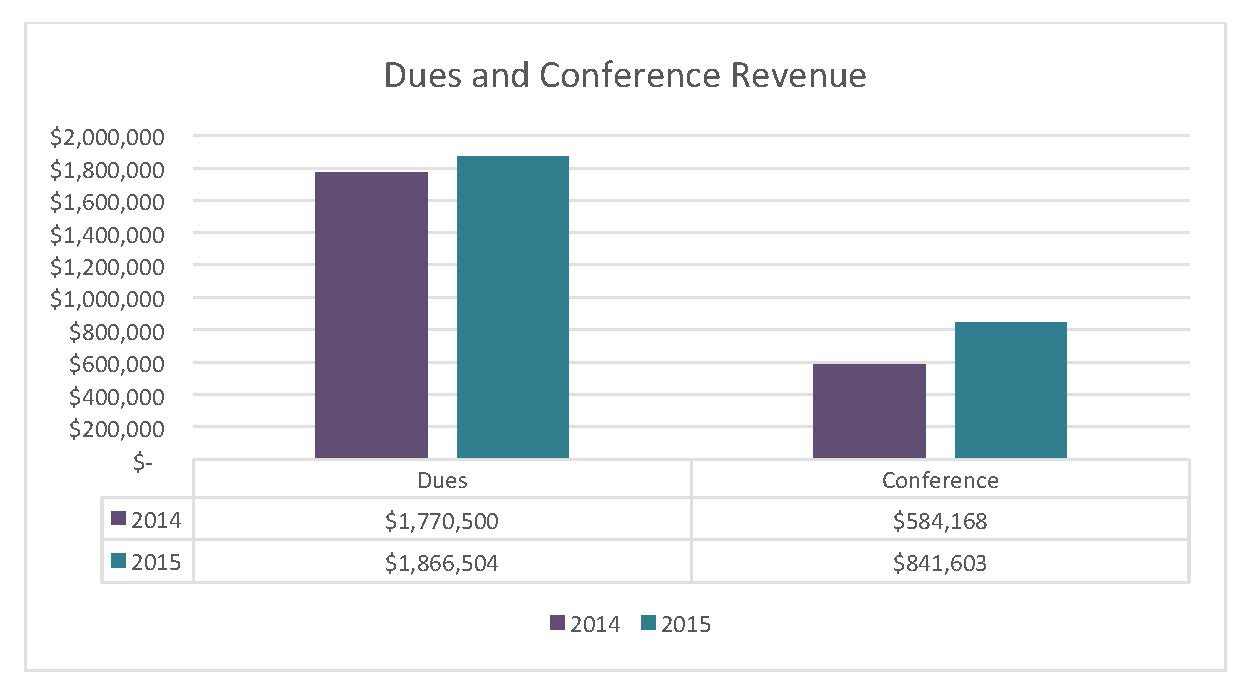 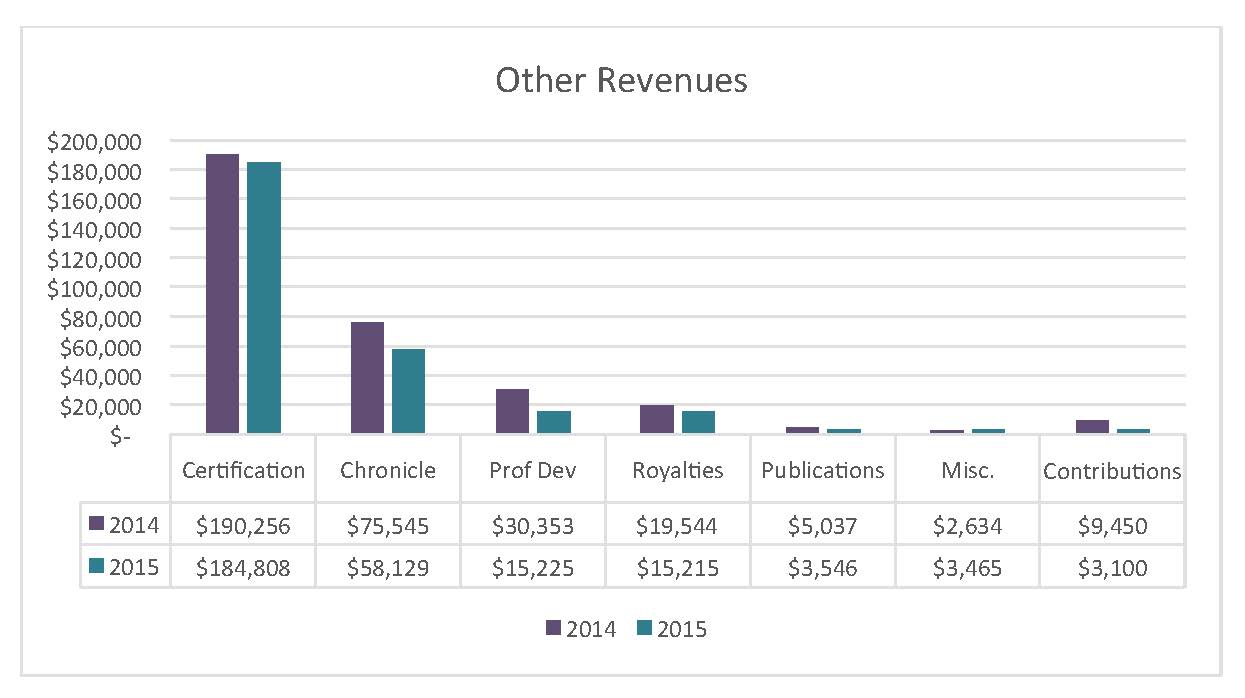 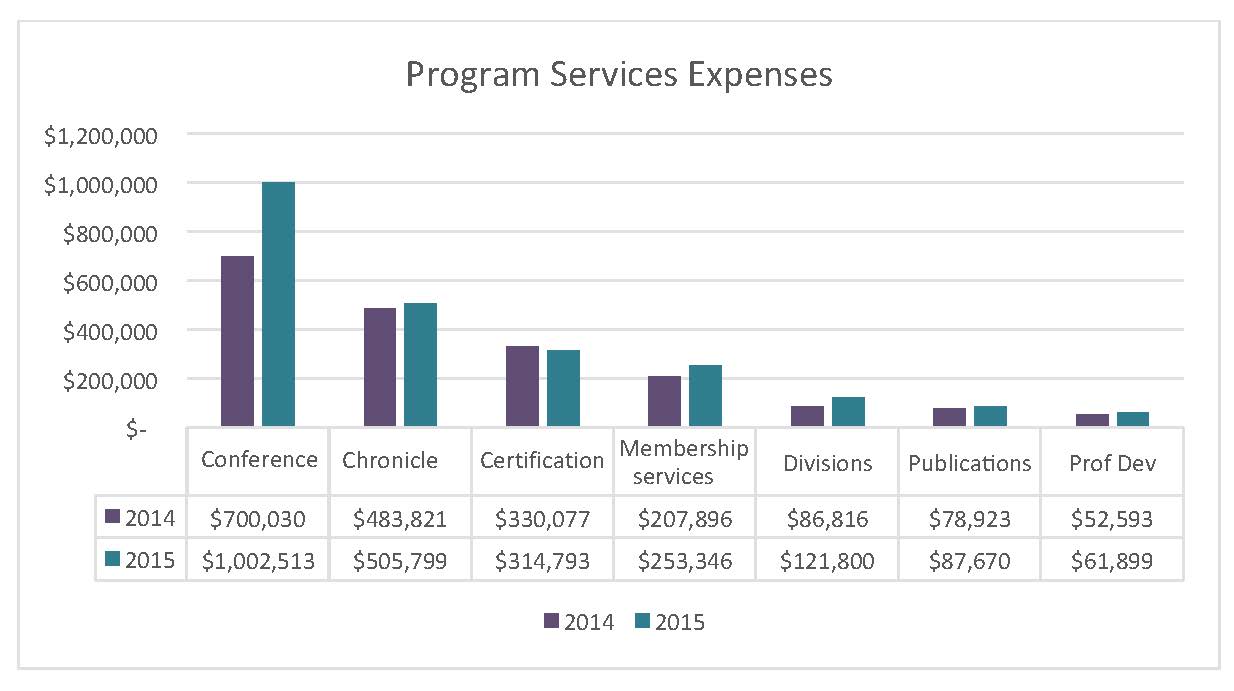 Expenses for support services were again mixed, with general and administrative expenses dropping about 28% to $522.8k as a result in a change in overhead allocation. This change in the overhead allocation is partially responsible for some of the increases in program services mentioned above. Officers and directors expenses increased by 25% to $83k due to higher travel costs. 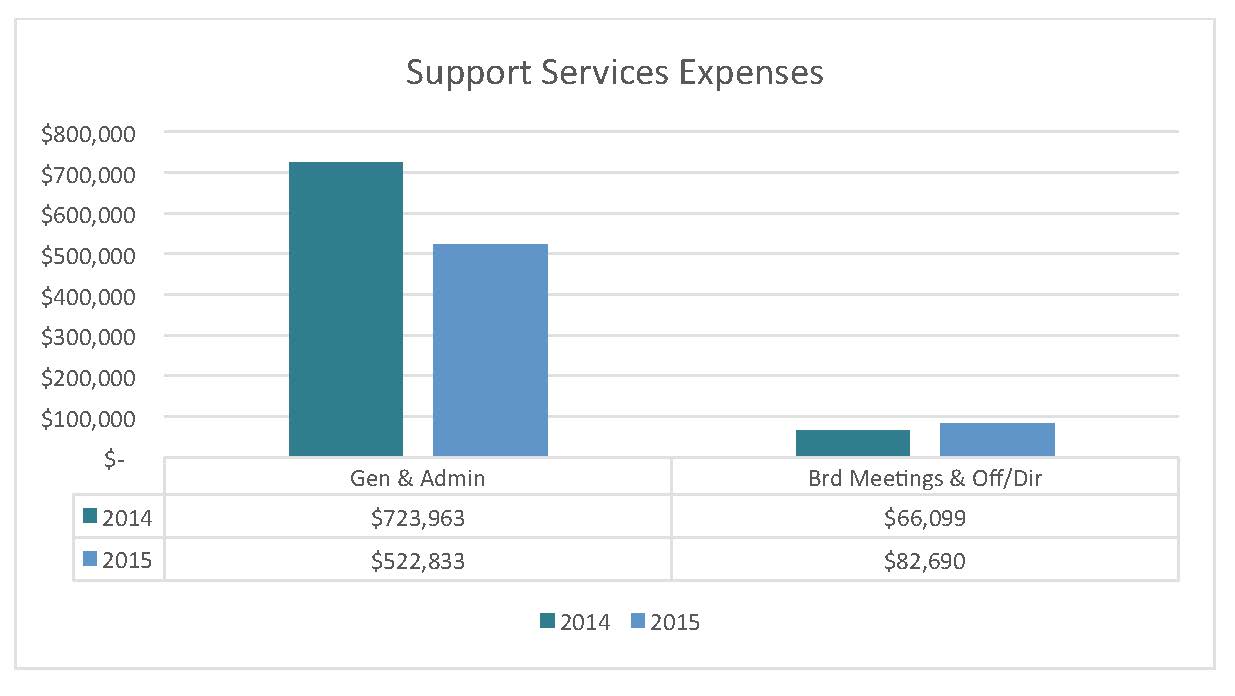 The value of our long-term investment account decreased by 0.4% to $350k, and the value of our property and equipment (net of depreciation) declined to $147k.

Excluding membership dues, ATA has four major sources of revenue (and expenses) or “member programs.” In decreasing order of gross revenue, they are the Annual Conference, the Certification Program, the Chronicle, followed by the Professional Development Program.

Over the past seven years (FY2008–09 through FY2014–15), each of these programs has generated a net cumulative loss. Of the four programs, only the Annual Conference has posted a net profit in any of the past five years (Orlando in FY2008-09, New York in 2009-10, and Boston in 2011-12, and excluding the FIT Congress as an “extraordinary item”). The other three programs have resulted in a net expense each and every year.

The Chronicle has just recently undergone a major overhaul, so significant cost savings are expected for the current fiscal year. The Certification Committee is evaluating new test delivery methods. Hopefully, any new method selected will not only improve the experience for the candidate, but also increase demand and reduce delivery and grading costs, thus resulting in higher revenues and reduced expenses. The professional development program is also being revamped with the goal of increasing demand and thus revenue. The Annual Conference remains the last major program to be reviewed critically from a financial standpoint. It is not necessary, or even desirable for all of these programs to become profit centers, but the overall revenue and cost structure must be improved to reduce the reliance on dues revenues for subsidizing these programs.

Programs and Other Expenses Subsidized by Dues

As mentioned earlier, with the sole exception of the Annual Conference, every program and expense item has operated at a net loss. That means that each of those expense items, from member benefit program services such as professional development to general supporting services such as “governance” (e.g., board meetings and directors expenses), are paid for using dues revenues. This is also the case for the Annual Conference when it fails to generate a net gain.

The two pie charts below show the proportion of dues revenues used to cover program and support services expenses for the past two fiscal years. The data table at the bottom shows the three-year trend of those subsidies. 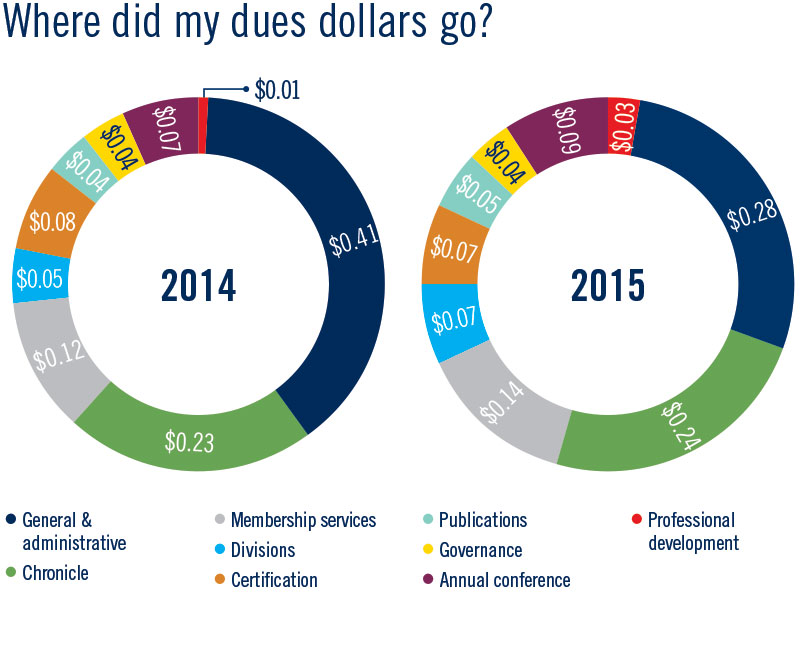 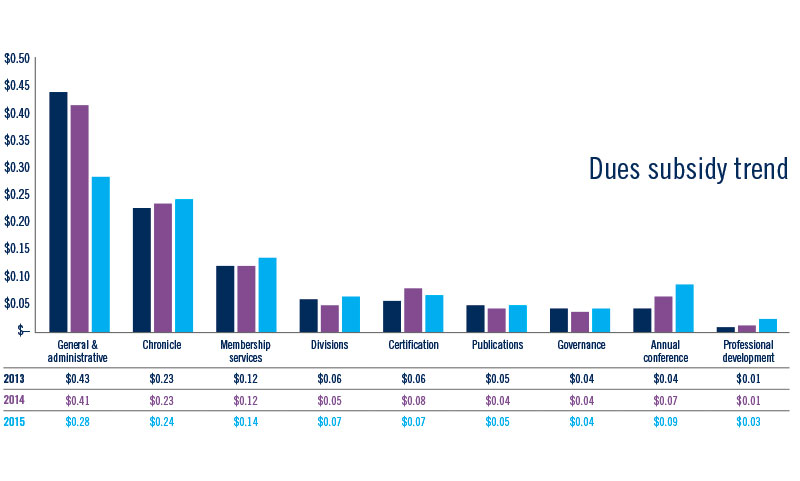 Of note is the rather consistent proportions for these programs, with the exception of general and administrative expenses. However, that change is due to the revision of the formula for allocating these overhead expenses to the various program services. Only the Annual Conference (excluding all profitable years) and professional development show any significant variations when compared against a seven-year average. For every $1 in dues received, the Annual Conference took 4 cents in 2013, 6.5 cents in 2014, and almost 3 cents in 2015, compared to an average of 5.8 cents since 2009. In the same manner, professional development took 0.8 cents of each $1 in dues in 2013, 1 cent in 2014, and 2.5 cents in 2015, compared to an average of 2 cents since 2009.

Also of interest, but not surprising, are the three areas that account for the majority of the “subsidies”:

It’s not surprising that general and administrative and membership services consume a significant portion of dues revenues, as these areas have no revenues of their own. The issue of Chronicle costs has been addressed previously.

As I stated at the Annual General Meeting in Miami, the Association is on the right track, but we have a long way to go before we pull into the station. We have made good progress. Strict and active governance by the Board of Directors, the pertinent committees and working groups, and ATA Headquarters staff should enable ATA to continue to improve its program offerings, and consequently, its finances.