Treasurer's Report for the First Five Months of FY2016–17

I’m very pleased to report that the Association’s finances have continued the positive development of the past few years. Based on near-final figures, the Annual Conference was a financial success and the deficits incurred on other program services continue to decline.

For the period from July 1 through November 30, 2016, our change in net assets (net income) was $536k, compared to $892k in the same period for FY2015–16. The Association is thus continuing to post positive net income and add to its positive equity balance.

Total revenue for the period was $2,007k, up 9% from $1,843k for the comparable period in the previous fiscal year. (See Figure 1.) Membership revenue posted a slight increase of 1.9%, from $802k to $817k, and certification revenue rose 14.5% year-on-year from $90k to $103k. Other revenue sources posted declines in revenue. However, these declines were not unexpected, and these revenues are not significant in relation to total revenue. The most significant change in revenue was the 17% increase in revenue from the Annual Conference, rising $151k to $1,064k versus $913k.

The increase in registration and exhibitor fees accounted for most of the increase in conference revenue. The increase in certification revenue was due to a change in accounting policies on the one hand, and a new revenue source on the other. Exam revenue was previously recognized on a cash basis (i.e., when it was received). It is now recognized in the period in which the exam is administered in order to better match revenues with expenses. This change resulted in $18k in accrued revenue from the last fiscal year, which will be recognized this year. The Credentialed Interpreter designation has added a new revenue stream to this program as well.

Of the two minor revenue sources, Publications showed a very minor gain in absolute terms of $200, while Other revenue posted a 75% drop year-on-year. The decline from $11k to just under $3k was a result of a change in insurance providers with a concomitant delay in revenue. 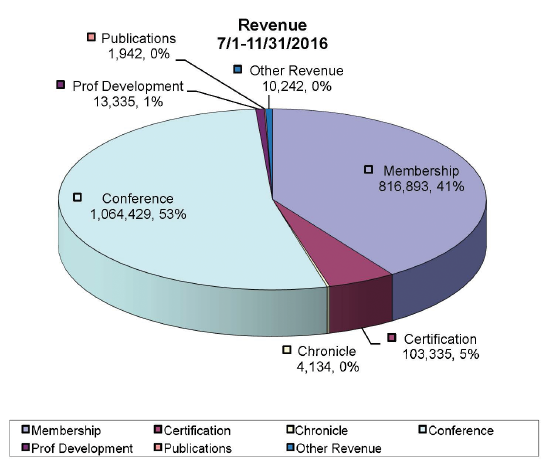 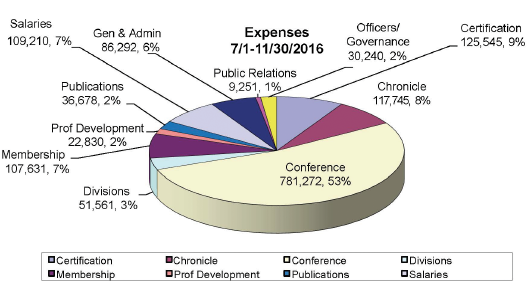 Total expenses for support services, which are the overhead expenses that are not allocated to a specific program, decreased by 15% to $235k (Prior Year: $278k). While individual items saw significant percentage increases, most are not material in absolute terms. Salaries and benefits rose by 30% (from $84k to $109k) due to less staff time being allocated as overhead to program expenses (and thus a larger share of total salaries and benefits remaining here). General and Administrative expenses posted a 37% decrease, primarily due to the timing of the conference hotel expenses mentioned above. The lack of hotel expenses in 2015 reduced the allocation of General and Administrative expenses to the conference, resulting in a higher-than-normal figure for the same period last year. Public Relations (PR) and marketing posted a 51% decrease year-on-year due to higher expenses incurred last year as the PR program was reinvigorated and because of initial expenses for PR and speaker training. Officers and Directors expenses fell 37% (from $30k to $19k) due to an unusually high number of reimbursements coming in the second fiscal quarter last year. Volunteers & Governance, which includes various committee work such as on standards, awards, etc., in addition to the Board of Directors, posted an increase from $8k to $12k due to expenses related to standards.

Our Statement of Financial Position (balance sheet) as of November 30, 2016, also shows positive development. With respect to assets, our balance of cash and cash equivalents is up 115% year-on-year to $1,605k compared to $748k. We have accounts receivable of $42k (Previous Year: $0). The increase in both cash and accounts receivable relate to the Annual Conference. Prepaid expenses declined year-on-year from $19k to $15k.

Our current liabilities posted a large increase due to bills related to the Annual Conference outstanding as of the reporting date. Again, the lack of a final conference hotel bill in 2015 is reflected in this item. Hence, short-term payables rose from $71k last year to $622k. Deferred accounts from unearned dues and certification exam revenue rose by 22%, from $461k to $564K. Our noncurrent liabilities, which consist entirely of deferred rent, fell by 19% to $34k.

Projecting interim results for some programs out to a full year, or comparing periodic results for some programs is fraught with uncertainties. However, not only is the overall trend of program “profitability” positive, but there seem to be positive developments with respect to all the individual major programs. (See Figure 3 below.) For those programs that traditionally operate at a net loss, the year-to-date loss as of the end of November 2016 is lower than the comparable figure for 2015. 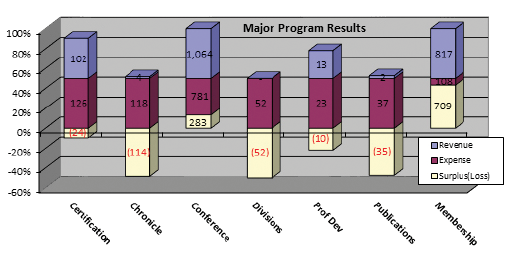 The membership program has a net surplus of $709k, versus $697k last year. The Annual Conference posted a net profit for the second year in a row, coming in $283k in the black. A year-on-year comparison is not meaningful due to the issue with the hotel bill mentioned previously.

The Certification Program has a current net loss of $22k, versus $47k last year. The Chronicle’s deficit has decreased from $118k to $114k. Divisions posted a deficit reduction of $12k to $52k. Professional Development saw its net loss decrease from $14k to $10k, and the net loss on Publications went from $40k to $35k.

As noted previously, the overhead allocation to the Annual Conference will be adjusted at the end of the fiscal year, which will probably decrease the surplus currently reported. However, the results will almost certainly remain positive. ATA57 currently shows a total conference revenue of $1,064k and total costs of $781k (including overhead of about $160k), for a net profit of $283k, which compares to $287k for ATA56 in Miami. Please note that the net profit will change at the end of the year when the conference overhead figure of $160k is adjusted when total annual expenses and total hours/salaries and benefits are known. The final conference overhead figure is expected to range between $200k and $265k, for a net profit between $161k and $96k.

As of January 29, 2017, the Association’s investment account had a market value of $1,180,986. Of that amount, just over $814k is in cash. The Finance and Audit Committee has discussed the portfolio, especially the large cash balance, but also two specific mutual funds that have seen a rating downgrade. After consulting with our investment advisor, it was decided to sell three mutual funds and to reinvest the proceeds in exchange-traded funds (ETF) with the same investment objective as the mutual funds they will be replacing. It was also decided to invest $300,000 of the cash in ETFs as well. Our investment advisor will conduct additional research and make specific recommendations for the investment vehicles and timing. It is quite possible that he may advise waiting for additional certainty in the markets before investing the excess cash.

The net profit from the Annual Conference and the continuing positive development with respect to the deficits incurred in the “subsidized” programs are very encouraging. Absent unforeseen negative developments, I see no reason why the Association should not close out the current fiscal year in the black once more. Congratulations to President-elect Corinne McKay as the conference organizer, as well as the Headquarters staff and volunteers who helped make ATA57 a financially successful conference. And to all the directors and officers, members, and again the Headquarters staff, who have all contributed to our financial turnaround and currently sound financial footing.

As I enter my last year as treasurer, I’m very pleased to be able to report such positive developments. The Association has made great strides on its path to financial stability and should it continue to stay the course, our finances will no longer be such a large constraint on our provision of services to our members.

During the recent Study Day with the Board during which the Board brainstorms and looks at longer-term strategy and goals, President-elect Corinne McKay mentioned that is was nice to once again be able to think in terms of implementing some of the ideas that were presented. In past years, there was sometimes a sense of “Yes, it would be great to do X, but we don’t have the money.” It is not unreasonable to expect to now see some programs get budget increases in the upcoming draft budgets for future fiscal years.