ATA at “Protect Translators. Protect Interpreters. Protect the World.”: A Panel Discussion at the United Nations

Advocacy & Outreach
By The ATA Chronicle

On December 11, 2019, the Permanent Missions of Spain and the Republic of Fiji to the United Nations, together with the United Nations Department of Safety and Security (UNDSS), hosted a panel discussion on the urgent need for enhanced legal and physical protection for translators and interpreters in high-risk settings. The event was co-organized on behalf of the world language community by Red T, a nonprofit advocating for laws and policies that promote the safety of linguists at risk.1

In addition to discussing steps for mitigating risks and vulnerabilities, the panel also focused on what can be done to help translators and interpreters in conflict zones gain the international recognition and protection they deserve. The impressive list of panelists included:

The precursor to the panel discussion was a roundtable held at the UN in April 20182, which explored the risks and vulnerabilities experienced by translators and interpreters working in conflict situations. 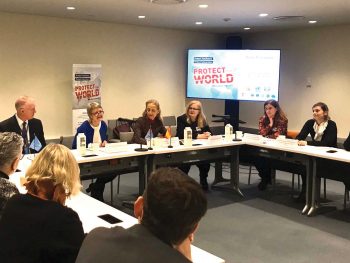 In her opening remarks, Moderator Linda Fitchett expressed the hope that the UN will move toward an international response to address the need for protecting translators and interpreters in conflict zones.

Ambassador Maria Bassols noted that Spain, a staunch supporter of a broad humanitarian agenda, believes that translators and interpreters play a critical role in international relations and enhance knowledge within the international community. The big question, though, is how to fit the issue of protection for this group into the UN agenda. While pointing out that visa programs are national programs run by sovereign states, Bassols also observed this does not mean that international criteria cannot guide these policies. She stressed, however, that there is a lack of information about the numbers involved and that more solid data is needed to take any further steps within the UN. Such steps could include the establishment of a UN working group or “group of friends” (an informal group of states formed to support the peacemaking of the UN), and even a resolution, although this last measure would require tremendous effort.

UNDSS Director Bill Miller, whose department protects people who “require extraordinary protection in the service of others,” explained that 44 areas around the world are now classified as high risk and above, and that translators and interpreters are key in helping bridge the gap of misunderstanding behind the social and nativist drivers that create high-risk areas.

Maya Hess then expanded on the fact that T&I protection is virtually absent in the current international legal regime, and that it can only be inferred. However, Hess stated that “ample and gruesome evidence has shown that inferential rights are not sufficient, especially since linguists affiliated with troops, humanitarian organizations, and the media often operate on the frontlines and in other violent settings.” She pointed out that this lack of protection is further compounded by “the diminishing relevance and protective power of the Geneva Conventions due to changes in the traditional model of warfare,” including “the growing tendency to outsource wars to private defense contractors whose profit motives supersede interpreter welfare.” To address these factors, Hess proposed various solutions, including:

IRAP Director of Strategy Betsy Fisher addressed interpreter safety and offered some important statistics. For instance, she noted that 216 documented interpreters have been killed in Iraq. Family members not only face direct, personal, and credible death threats from those in their local communities, but are also seen as security threats by their employers. In one case, a contract interpreter placed a call to an insurgent at the direction of his employer and was subsequently suspected by his employer of having misplaced loyalties, specifically because of this phone call.

After noting that relocation programs are rife with backlogs, delays, and inexplicable red tape and essentially amount to merely remedial measures, Fisher described specific steps that can be taken in conflict zones to ensure the safety of translators and interpreters. For example, occupying forces must find ways to protect the identities of linguists, including:

Next, Simona Škrabec spoke about PEN International’s efforts to protect and relocate translators living and working in war zones and other high-risk settings. Škrabec noted that PEN’s main focus is freedom of expression and that linguists, who serve as “pillars of peace and mutual understanding,” are especially vulnerable and exposed by virtue of their abilities. Some of the translators PEN International has helped resettle include: 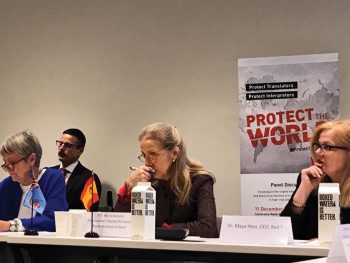 French attorney Caroline Decroix described her battle with the French government to protect Afghan interpreters who worked for the French army. The French government was in Afghanistan from 2001 to 2014 and employed approximately 800 Afghan nationals, largely as interpreters under fixed-term contracts. As the French forces started to withdraw in 2012, several criteria were introduced for relocating these linguists to France, including assessing the threat level to the person concerned, the quality of services rendered, and the ability to integrate into French society. Under these criteria, only 73 people were accepted, and under revised criteria submitted three years later, only 100 more were accepted. In the fall of 2018, 51 additional families were admitted to France under a third procedure. There are a number of cases still pending, which points to the need for a harmonized response from the UN, since selection criteria for relocation vary from one country to another and create inequality within the interpreter community.

Finally, the panel heard from Abdul Qaiyoum Najbullah via video recording. Najbullah worked for the U.S. and Canadian armed forces from late 2007 to 2013. He took on this work because he saw it as a way to provide for his family while helping bring peace to his homeland. In 2010, however, his parents were murdered due to his collaboration with the International Security Assistance Force (ISAF), and he was forced to flee. He paid a human trafficker to take him to Germany, a journey that lasted over seven months and at times involved greater risk than working for ISAF in Afghanistan. The rest of his story is best told in his own words:

“After arriving in Germany, I found one of my Canadian team members I worked with in Afghanistan. I was facing deportation from Germany to Austria and Hungary because of the Dublin Treaty and asked him for help. He promised that he would take me to Canada. After that, Joe Warmington, a journalist from the Toronto Sun, started writing articles about me. Red T read my story, got involved, and helped me. I was stuck without money in a refugee camp in southern Germany and needed to get to the Canadian Embassy in Berlin for a visa. Red T contacted the German Federal Association of Interpreters and Translators and asked them to bring me to my visa interview. Together with Joe Warmington, they kept my case in the news and on social media. All this worked—I got my visa and landed in Canada on April 15, 2016.”

The Need for an International Response

The panel concluded with additional contributions from policy experts and a lively discussion. The overall message to attending member states was, to use Hess’ words: “The time has come for an international response to what is an international problem, and we call on the UN to firmly place the protection of linguists on its Protection-of-Civilians agenda.”

Lucy Gunderson, CT is an ATA-certified Russian>English translator specializing in human rights, legal documents, and academic translation. She is also a past chair of ATA’s Divisions Committee and a former administrator of the Slavic Languages Division. Contact: lucy@russophiletranslations.com.