The American Translators Association’s Board of Directors met April 14–15, 2018, in Alexandria, Virginia. The Board met in conjunction with the Certification Committee and Language Chairs meetings. (Each exam language combination has a language chair administering the passage selection and graders. ATA currently offers testing in 30 language combinations.)

Here are some highlights from the Board meeting. 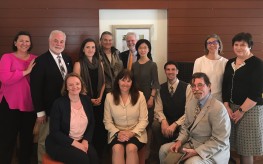 Working Budget: The Board approved the July 1, 2018–June 30, 2019 working budget and the 2019–21 draft budgets. The approved budget of $3.32 million is a slight increase over the current budget of $3.22 million. The working budget provides an interim financial framework. By using this interim budget, changes and revisions can be made based on the actual year-end figures. The final budget will be approved at the next Board meeting.

In addition, there will be an election for a director for a one-year term. (The vacancy occurred with the election of Director Karen Tkaczyk to secretary.) Tony Guerra has been put forward.

Law Division: The Board approved the establishment of the Law Division (LawD). The Board also approved the appointments of Amanda Morris, as acting administrator, and Ana Gauz, as acting assistant administrator. They will serve until the division election in October 2019. Information about joining will be forthcoming. ATA members may join any or all of the Association’s now 21 divisions at no additional charge.

Certification: The Board approved January 1, 2020, as the date to open the certification exam to nonmembers. The Board also approved an Ad Hoc Decoupling Committee, chaired by President Corinne McKay, to oversee the process. In addition, Certification Committee Chair David Stephenson briefed the Board on developments in the Certification Program.

Gode Medal Award Committee: The Board approved the appointment of the members of the 2018 Gode Medal Award Committee: Past President Caitilin Walsh (chair), Past President Nicholas Hartmann, President Corinne McKay, Director Cristina Helmerichs, and Honors and Awards Committee Chair Lois Feuerle. The Gode Medal is ATA’s highest and most prestigious award that recognizes outstanding contributions to the translating and interpreting professions. (Nominations are still being accepted.) 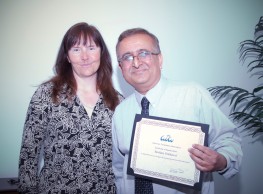 ATA President Corinne McKay presents Roshan Pokharel with a certificate of appreciation for his 25 years of service to the Association. Roshan is the assistant executive director, IT and operations. Many of you have also seen him managing the registration counter at the Annual Conference.

ATA will hold its regularly scheduled elections at the upcoming 2018 ATA Annual Conference in New Orleans, Louisiana, to elect three directors for a three-year term. In addition, there will be an election for a director for a one-year term. (The vacancy occurred with the election of Director Karen Tkaczyk to secretary.) Further nominations, supported by acceptance statements in writing by each additional nominee and a written petition signed by no fewer than 60 voting members, must be received by the Nominating and Leadership Development Committee by June 1. Acceptance statements and petitions should be submitted to Nominating and Leadership Development Committee Chair David Rumsey (ata-hq@atanet.org). Candidate statements and photos of the candidates will appear in the September/October issue of The ATA Chronicle and on ATA’s website. The candidates proposed by the Nominating and Leadership Development Committee are: