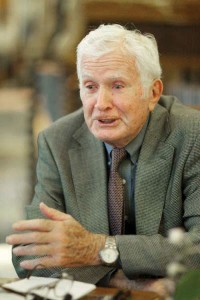 (Past President Caitilin Walsh gave the Gode Medal presentation at ATA’s 59th Annual Conference in New Orleans. Here are some excerpts from the presentation.)

The American Translators Association is honored to recognize Siegfried Ramler as the recipient of the 2018 Alexander Gode Medal.

Siegfried is one of the last living interpreters from the historic Nuremberg trials, interpreting from the beginning until the end of the proceedings. Moreover, he has been engaged in life-long activities designed to support and protect human dignity and intercultural understanding, even into his 90s.

Siegfried’s remarkable story began in Austria in 1924. He was a young boy when his country was annexed by Nazi Germany, and his family lost their home. He escaped the Nazi Regime at age 14 via the Kindertransport (“children’s transport”) to England in 1938, where he lived throughout the war. In 1945, he joined the U.S. Air Force to work as a linguist in Germany. He learned of the trial of the Nazi leaders, went AWOL from his military post, and hitched a ride to Nuremberg’s Palace of Justice. He was readily accepted as an interpreter for the trials because of his fluency in German and English. Within days he was interpreting at the pre-trial interrogations of Josef Albert Meisinger, the man who ruled large parts of occupied Poland, also known as the “Butcher of Warsaw.” 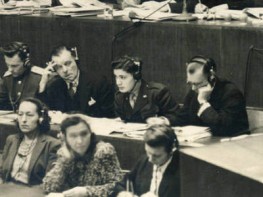 The Nuremberg verdicts were one of the catalysts for the Universal Declaration on Human Rights, and then two years later, the European Convention. These, Siegfried says, are matters of pride and also concern: “Just because it doesn’t all work perfectly doesn’t mean it was the wrong way.” In his view, Nuremberg “created a path to the rule of international law, a means for dealing with guilt and the acceptance of responsibility, and a way of distinguishing right from wrong.”

The legacy and lessons of that momentous year were “extremely important,” personally and globally, and we can still see them reflected in world events today. Siegfried feels strongly about global cooperation. Siegfried works at the East-West Center at the University of Hawaii, an organization established to promote better relations and understanding among the people and nations of the Pacific Rim through cooperative study, research, and dialogue.

Siegfried was unable to attend ATA’s Annual Conference, but sent the following statement:
“I am deeply humbled to be this year’s recipient of the Alexander Gode Medal. My life has taken me on a long, varied, and very satisfying career as an educator and as a connector of peoples and cultures.
As a 22 year-old interpreter interviewing the likes of Hermann Göring and other Nazi criminals, I was taken with the absolute necessity of the importance of human dignity and understanding. My work as an interpreter was a technical task, pioneering simultaneous interpreting, but in retrospect, it has led me to a career as an educator and my hopes and concerns for a peaceful world. My life’s work has been to pursue all endeavors promoting the strengthening of relations between nations, developing understanding between people of different languages and cultures.”

Siegfried’s accomplishments have had a tremendous impact on the translation and interpreting professions. ATA is honored to have him as a Gode Medal recipient.

The Alexander Gode Medal, ATA’s highest honor, is named for ATA’s founder and guiding spirit, who was the first recipient. The medalists represent a record of achievement in a variety of linguistic fields, including not only translators and interpreters, but also lexicographers, theorists, association leaders, and institutions. This award may be given annually. 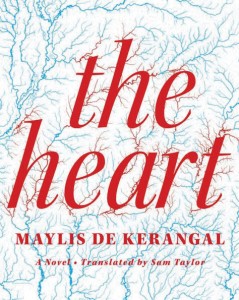 Sam Taylor is the recipient of the 2018 Lewis Galantière Award for his translation from French into English of Maylis de Kerangal’s novel The Heart (Farrar, Straus and Giroux, 2016).

The Heart is a tale of grief, hope, and survival. Just before dawn on a Sunday morning, three teenage boys go surfing. While driving home exhausted, the boys are involved in a fatal car accident on a deserted road. Two of the boys are wearing seat belts; one goes through the windshield. The doctors declare him brain-dead shortly after arriving at the hospital, but his heart is still beating. The Heart takes place over the 24-hours surrounding the resulting heart transplant, as life is taken from a young man and given to a woman close to death. The novel examines the deepest feelings of everyone involved as they navigate decisions of life and death.

Maylis de Kerangal is the author of several novels in French, including Je marche sous un ciel de traîne, La vie voyageuse, and Naissance d’un pont (winner of the 2010 Prix Franz Hessel and Prix Médicis). She has also published a collection of short stories, Ni fleurs ni couronnes, and a novella, Tangente vers l’est (winner of the 2012 Prix Landerneau). Her fifth novel, Réparer les vivants (The Heart), was published to wide acclaim and won the Grand Prix RTL-Lire and the Student Choice Novel of the Year from France Culture and Télérama. She lives in Paris, France. 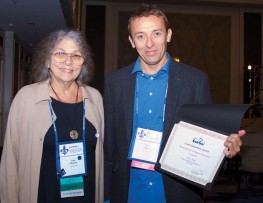 Sam Taylor is a literary translator and author. Born in 1970 in Nottinghamshire, England, he worked as an arts journalist for the London Observer until 2000, when he moved to France, where he wrote four novels, raised a family, and learned French. His first translation was Laurent Binet’s novel HHhH, which was shortlisted for three awards, including the 2012 French-American Translation Prize. Now residing in the U.S., he has translated more than 30 books, including Hubert Mingarelli’s A Meal in Winter (shortlisted for the Independent Foreign Fiction Prize), Joel Dicker’s best-selling The Truth About the Harry Quebert Affair, and Riad Sattouf’s graphic novel series The Arab of the Future. His translation of The Heart was awarded the 2017 French-American Foundation and Florence Gould Foundation Prize.

The Lewis Galantière Award is bestowed biennially in even-numbered years for a distinguished book-length literary translation from any language, except German, into English. This award honors distinguished ATA founding member Lewis Galantière (1894–1977). His translations from French drama, fiction, poetry, and scholarship enriched cultural life during the middle decades of the 20th century and are still being read over a quarter century after his death. 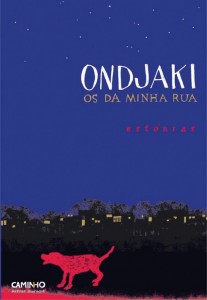 Devin Gilbert is the recipient of the Student Translation Award for his translation project from Angolan Portuguese into English of Ondjaki’s collection of short stories Os da minha rua (The People On My Street). Devin received his MA in interpreting and translation studies from Wake Forest University in 2018. He is currently a doctoral fellow in translation studies at Kent State University.

Ondjaki is the pen name of Ndalu de Almeida, an Angolan writer who makes his home in Rio de Janeiro. Critics have called him one of the most important writers in the history of African literature. Ondjaki’s diverse bibliography includes novels, children’s books, poetry collections, and short story anthologies, plus additional credits in writing for film, television, and theater. Inspired by the works of Gabriel García Márquez and Jean-Paul Sartre, his works include the novels AvóDezanove e o segredo do soviético (Granma Nineteen and the Soviet’s Secret), Quantas madrugadas tem a noite (How Many Dawns Has the Night), and Bom dia camaradas (Good Morning Comrades). Ondjaki has received numerous awards, including the José Saramago Prize and Grinzane for Africa Prize.

Os da minha rua is a collection of short stories that presents the setting of the author’s own childhood, a microcosm of Angola’s capital city, Luanda. On one hand, Ondjaki presents the life of children, which is very similar throughout different cultures. On the other hand, he invites readers to learn about Angola, which has been molded by colonization, the fight for independence, influences from Cuba and the USSR, civil war, poverty, and the misery of the Angolan people. The book has not yet been translated
into English. 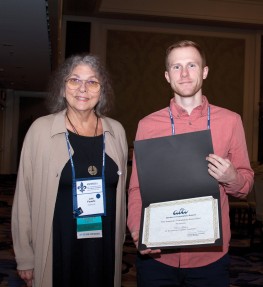 To translate Ondjaki’s collection of short stories, Devin designed an applied translation model (Oscillation Model) to help him distinguish what aspects of the source text were cultural, what aspects were more linguistic, and what aspects pertained to literary stylistics. With regards to the translation of cultural elements, this model helped him recognize when to highlight features of Angolan culture that would be foreign to U.S. readers (foreignization) and when it was more preferable to move these cultural elements closer to the culture of the target audience (domestication). Some of the challenges Devin encountered as he prepared a translation for English-speaking readers in the U.S. included ensuring contextual understanding and appropriate transfer of Angolan Portuguese that is influenced by native languages.

Diego Burgos, an associate professor of Spanish and translation at WFU, directed the project together with Henryk Ślusarczyk, a Divine Word missionary from the Polish province of St Joseph. Ślusarczyk, who spent over a decade as a missionary in Angola, was able to provide cultural and linguistic background for the translation of the novel.

The Student Translation Award is presented to any graduate or undergraduate student, or group of students, for a literary or sci-tech translation or translation-related project. The award may be given annually.