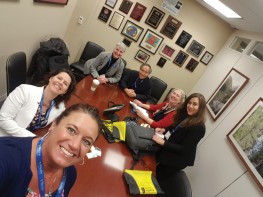 On February 15–16, 2018, the Joint National Committee for Languages-National Council for Languages and International Studies (JNCL-NCLIS), the authority on language policy in Washington, DC, hosted its annual Language Advocacy Day and Delegate Assembly. Every year, ATA lends its voice as one of the advocates from the language professions to meet with Congress and request legislation and funding in support of language education and industry priorities. In addition to numerous language educators, several translator and interpreter (T&I) sister organizations participate in the event.

As ATA’s representative to JNCL, I joined nearly 125 participants from 32 states who conducted over 175 meetings with congressional and executive branch offices. During these meetings, advocates made requests for Congress to fund federal language programs. This year, for the first time, educators added their voice to T&I professionals to ask for an examination and ultimate elimination of the federal government’s use of the Lowest-Price Technically Acceptable bidding model for the procurement of language services.1 This was a direct outgrowth of the messaging developed for ATA’s own Advocacy Day, held in conjunction with ATA’s 58th Annual Conference last fall in Washington, DC.2

Continuing the rate of growth of the past few years, Language Advocacy Day in 2018 set a record for the number of congressional and executive branch meetings held. Moreover, 2018 featured a Thunderclap, a social media amplification tool, which sent the same uniform post in support of language advocacy to over 600,000 recipients. In essence, this means that the collective message delivered during Language Advocacy Day reached a substantially larger audience than previous years, opening more doorways to influence policy in support of language priorities throughout 2018 and beyond.

I would encourage all ATA members and supporters to sign up to receive policy alerts from JNCL-NCLIS (https://languagepolicy.org). These contain specific actions and templates/scripts you can use to make advocacy easy. Follow #LanguageMatters and @JNCLinfo on Twitter for opportunities to amplify others’ messages. The current political climate means we have a stellar opportunity to make meaningful changes happen to the benefit of all.

Caitilin Walsh is a past president of ATA (2013–2015). She currently serves as chair of ATA’s Education and Pedagogy Committee. She also serves on the executive committee of the Joint National Committee for Languages. An ATA-certified French>English translator, she produces translations for the computer industry and food lovers alike. She is a graduate of Willamette University (Oregon) and the Université de Strasbourg (France). She teaches ethics and business practices at the Translation and Interpreting Institute at Bellevue College. She is a member of the Translation and Interpreting Advisory Committee for the Puget Sound Skills Center. Contact: cwalsh@nwlink.com or @CaitilinWalsh on Twitter.