Translating My Way Around the Periodic Table 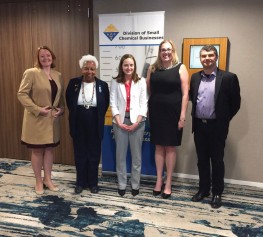 At the end of 2016 I was invited to speak at the Spring 2017 National Meeting of the American Chemical Society (ACS) in San Francisco. With nearly 157,000 members, ACS promotes and supports chemistry and its practitioners. (For more information about the ACS, see www.acs.org.)

A freelance technical writer I met about 10 years ago at a prior ACS meeting invited me. She and I had kept in touch, being rare freelancers among chemists, and had met several times at various other ACS events. As symposium coordinator, she was looking for a diverse set of people who are chemists, write for their careers, and can speak in public.

Now, fast-forward six months. Several of the six speakers chosen for the symposium connected beforehand on Twitter and LinkedIn. We used the hashtag #chemistscanwrite before, during, and after the event to help promote the symposium, which was one of many taking place simultaneously across the city for the 18,917 people (!) registered for the national meeting.

In early April I found myself in the lovely Nikko Hotel in downtown San Francisco. Our symposium was called “Chemists Writing for Fun and Profit: Write Your Own Career.” The other speakers included a journalist, a blogger, a trainer, and published authors. The audience was a roomful of chemists from academia, industry, and government.

The title of my talk was “Translating My Way Around the Periodic Table.” Translating chemistry for a living was a novel idea to many in attendance, so my topic appeared to grip the room. Making assumptions based on the accents of those asking questions and the contacts I made afterward, I think that a substantial portion of the audience was bilingual.

When preparing my talk, I knew I needed to establish some fundamentals, as translation and interpreting would not be well understood by the majority of those present. The format I came up with appears to have worked and would be applicable to almost any technical field.

The first questions were just as you might expect. “Where did you get your first jobs?” “How do you price translation?” For me, the answer to the former is ProZ.com, so I explained online marketplaces. Regarding pricing, I talked about per word/hour/job pricing and explained the norm for the bulk market and then what can happen over time if you move into the value-added market. Attendees also asked about my business name and other aspects of branding as a self-employed person.

Overall, I feel that speaking at this event resulted in an increased awareness of translation and interpreting as a career for professionals with a very specific skill set. In addition to those in the room, many of the attendees had followed the #ACSSanFran Twitter feed and seen tweets about my talk. It was also encouraging to see supportive tweets from ATA’s Public Relations Committee at the same time, using the event hashtags #chemistscanwrite and #ACSSanFran.

I enjoyed this opportunity to promote translation and interpreting as a profession and to familiarize people with the importance of what we do. I was also able to explain what an association like ATA can do to help them and how subject matter experts can thrive as translators and interpreters.

The comment that stood out to me most from my experience came early in the morning, when I was introducing myself to one of the other speakers. “Wow, that’s amazing. You can do that for a living?”