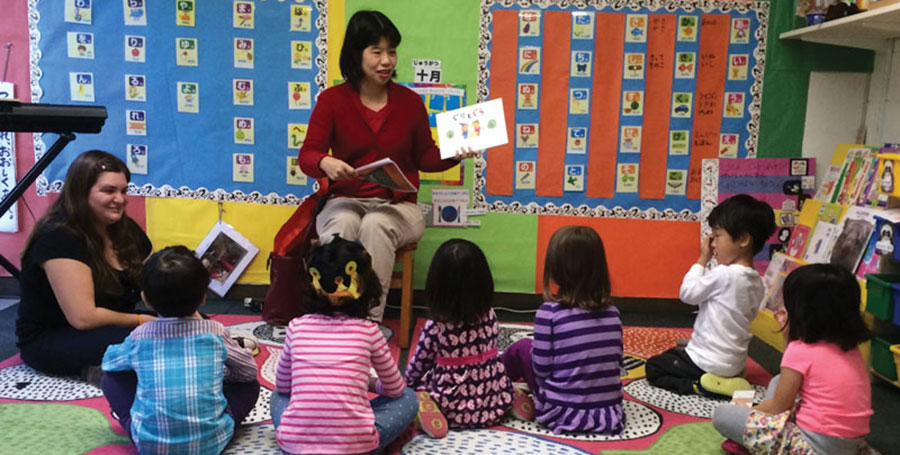 This year’s ATA School Outreach Contest winner showed her audience how language professionals can save the day!

Rika Mitrik, a Japanese<>English interpreter and ATA-certified English>Japanese translator, is the winner of this year’s School Outreach Contest. She won a free registration to ATA’s 57th Annual Conference in San Francisco, California, for a colorful photo taken during her visit to the WEE Center in Rockville, Maryland, where she spoke to preschoolers in the Japanese program about her profession.

Rika first heard about ATA’s School Outreach Program in 2008 at the National Capital Area Translators Association New Year’s brunch and decided to give her first presentation at her oldest daughter’s elementary school. “I thought it was a good idea to educate our future clients while they were young,” she says.

She started preparing for her presentation by practicing on her niece and nephew and quickly discovered that their attention span was 15 to 20 minutes. With this in mind, she created a short role-play exercise for her daughter’s second grade class that included herself, her daughter, and the teacher. The setting was a parent-teacher conference. Rika pretended to be a mom who just arrived in the U.S. from Japan, her daughter played an interpreter, and they discussed math homework with the teacher.

Rika explained that her daughter was only able to play the interpreter’s role in the exercise because Rika had been speaking only in Japanese to her daughters ever since they were babies and encouraging them to answer in Japanese. She wanted the students to understand that being bilingual is a good start, but that it takes a lot of training to convert an idea from one language to another in order to help people who speak different languages communicate better.

A Bilingual Audience: The Story of the Winning Photo

Last year, Rika was asked to present what she does for a living at her youngest daughter’s preschool. She immediately knew that the students would be the perfect audience for another School Outreach presentation, since the WEE Center offers a biweekly morning program in Japanese called Panda Class. The students in this program are all raised in an English/Japanese bilingual home environment or are Japanese children who are living in the U.S. temporarily.

Knowing that she had to adapt the content to the short attention span of three- to five-year-olds, Rika again used a role-play exercise along with some interactive activities to explain the difference between translation and interpreting. She explained translation by reading a popular Japanese picture book called Guri and Gura to the children and an English-speaking teacher from another class. The children could understand the Japanese version, but the teacher couldn’t, leaving her puzzled and lost. Rika then pulled out the English version of the book, pretended to translate the book on the spot (into English) for the teacher, and saved the day. The children were relieved to see that the teacher could understand the book with Rika’s help.

To explain interpreting, Rika recreated the parent-teacher conference role-play from her first School Outreach presentation mentioned earlier. This time Rika played the interpreter, the Japanese teacher played a mom who couldn’t speak English, and the English-speaking teacher held the conference.

The last part of Rika’s presentation included an interactive activity. To demonstrate translation, she drew a cat on the whiteboard and asked the students to translate the image into words. Some five-year-olds were able to write “cat” in both English and Japanese. She then demonstrated interpreting by asking a younger child to thank the teacher for helping with the presentation by interpreting “thank you” from Japanese into English.

Rika says that the best moment of her presentation was seeing that her young audience was excited to participate. “When I asked questions, they all wanted to answer. They were so eager to learn.” The school has since asked Rika to come back to repeat the presentation with another class.

Rika grew up in Hiroshima, Japan, and moved to the U.S. to attend college. Completing a degree in political science and a paralegal certificate program in her second language gave her a good start for a future career in translation. After finishing her studies, she started working at a law firm in Washington, DC, and did some translation work there. However, the demand at the law firm was mostly from Japanese into English, which she found more challenging than translating into her native language. “The litigation involving Japanese companies tends to produce a lot of documents in Japanese, which require translation into English for American lawyers,” she explains.

After a few freelancing assignments on the side, she joined a localization company, where the demand for translation was from English into other languages. She worked as an in-house translator and learned the basics of the language industry through experiences such as reviewing freelancers’ translations, going to interpreting assignments, testing localized software, providing voiceovers for video production, and conducting layout checks.

“It was an exciting work environment with many multilingual colleagues; however, the company suffered from financial difficulties after the information technology bubble burst in 2001, which is when I became a freelancer,” Rika says. “Having studied and worked in the legal industry also helped me to start translating legal contracts and interpreting for depositions after I became a freelancer.”

Raising the Next Bilingual Generation

Rika has been living in Gaithersburg, Maryland, for 16 years. She has three daughters (ages 5, 10, and 16) and has invested a large part of her life educating them to be bilingual. Besides speaking to them in Japanese, she enrolled them in Saturday Japanese school starting around age three. She says that she was lucky to have found the weekday Panda Class for her youngest child as well.

“I spend many hours during the week helping them with their Japanese homework so that they can keep up with their studies,” she says. “I take them to my parents’ house to spend every summer in Japan, putting them in daycare or public schools in my hometown.” This summer, Rika took her oldest daughter to open college campus events in Tokyo, and they found an engineering degree program that her daughter is considering applying to in a few years.

Get Involved in the School Outreach Effort

When asked how she felt about winning the School Outreach Contest, Rika says she was thrilled to have received free registration to ATA’s Annual Conference, especially since she was already planning on attending. Rika’s successful visits to her children’s schools brought her an educational event of her own at the conference.

Molly Yurick is a Spanish>English translator specializing in the tourism, hospitality, and airline industries. She has worked as a medical interpreter in Minnesota and as a cultural ambassador for the Ministry of Education in Spain. She has a BA in Spanish and global studies and a certificate in medical interpreting from the University of Minnesota. She is currently living in northern Spain. You can visit her website at http://yuricktranslations.com. Contact: molly@yuricktranslations.com.