Marybeth Timmermann, an ATA-certified French>English translator, is the winner of the 2016–2017 School Outreach Contest. She won a free registration to ATA’s 58th Annual Conference in Washington, DC for an all-smiles photo taken during her presentation at Greenville High School in Greenville, Illinois, where she spoke to students in the school’s advanced Spanish class about translation.

Marybeth had been reading about the School Outreach Program and contest in The ATA Chronicle for many years and had always been interested in participating. In March 2017 she gave her first School Outreach presentation about translation to her son’s Spanish class at Greenville High School. “I just called his teacher and asked if I could present,” Marybeth says. “He was very excited to have me.”

“Greenville is a small town and we don’t have much contact with people who speak foreign languages,” Marybeth explains when asked about her motivations for giving a presentation. “Other languages just aren’t a part of our lives, so I wanted to stress the idea that translating is something people do, not just something that phones and Google Translate do.”

Marybeth decided to speak to the school’s advanced class because they were juniors and seniors in high school who had chosen to study Spanish as an elective. Since studying languages is considered impractical in her small town, she wanted to challenge that way of thinking before the students went off to college. “I wanted to show them that you don’t just have to be a teacher if you study language. You can do translation or interpreting too.”

Marybeth did a lot of research before starting to prepare her outreach material. “I read through all the presentations that are available on the School Outreach website and listened to one of ATA’s free webinars about the program.” She found that none of the presentations available online quite fit what she wanted to do, so she decided to create her presentation from scratch. She then spent a lot of time researching Spanish translation examples she could include in her talk. “I don’t speak Spanish, so that was a real challenge.”

When Marybeth started her presentation by speaking French, it came as a big surprise for the students. “This is a small town and I know all the kids. To them, I’m just Matt’s mom,” she says. “They were so shocked to hear me speaking French.”

Having gotten the presentation off to a great start with this attention-grabber, Marybeth moved on to the basics. Topics included the differences between translation and interpreting, common specializations, and places where you can work (e.g., freelance and the private and public sectors).

Her next step was to explain that translation is more than word-for-word substitution by providing a few simple examples from the Spanish translations she had collected during her research. One of the examples she used pointed out that although three words are used to say “I am fine” in English, only two words are needed to say the same thing in Spanish (estoy bien). Marybeth then explained how false friends can lead to serious misunderstandings and got a laugh from students by pointing out that embarazada in Spanish means “pregnant” in English, not its false friend “embarrassed.”

She then moved on to more complex examples using metaphors and idioms from the Dominican Republic, where the class teacher is originally from. Her final example came from a real-life translation her son pointed out to her earlier in the year. They were at a McDonald’s where there was an advertisement for breakfast sandwiches playing on a screen in both English and Spanish. In the English version, the ad ended with text across the screen that said “More Breakfast, More Amazing,” while the Spanish version ended with Más y más y más rico (or “More and more and more delicious”). Her son was surprised to see that the ad used all the same images, but the phrases at the end didn’t say the same thing. Marybeth used this example in class and the teacher helped explain why a literal translation of the English version wouldn’t sound appealing to a Spanish-speaking audience.

Marybeth also spent time talking about the role of technology in translation, including computer-assisted translation tools and machine translation. She wrapped up by discussing how translation is a growing profession by including statistics from the U.S. Bureau of Labor Statistics. She concluded by explaining what the students could do to become a translator or interpreter and mentioned ATA as a great resource for aspiring linguists. 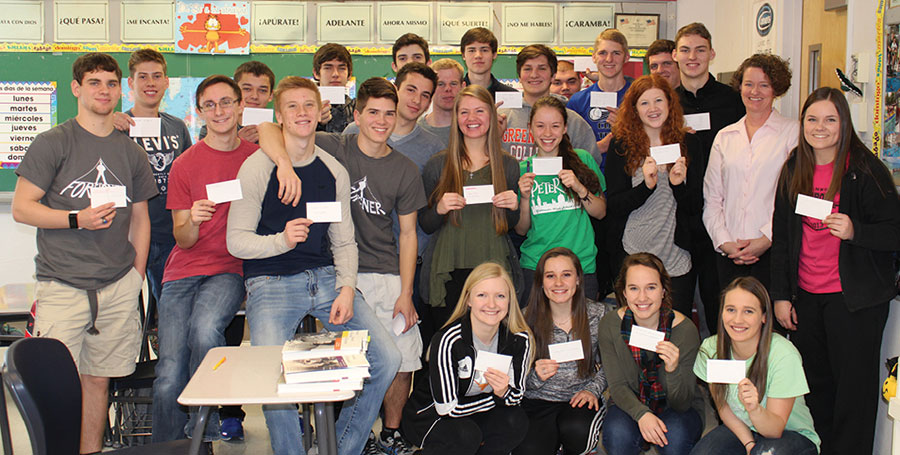 The winning photo of this year’s School Outreach Contest is of Marybeth and the students posing with the result of a translation activity. She gave the students an index card and asked them to write down an example translation that showed one of these:

The students wrote down their answers and then posed with their index cards after finishing the activity. “We had so much fun,” Marybeth says.