ATA Member Denise Fisher, a Japanese<>English interpreter and translator based in Orient, Ohio, is the winner of this year’s School Outreach Contest. She won a free registration to ATA’s 60th Annual Conference in Palms Springs, California, for her photo taken during a visit to the University of Michigan, where she spoke to graduate students in a Japanese interpreting class about her profession.

Living Her Dream: Learning Japanese and Living in Japan

Ever since Toyota opened a large manufacturing facility in Georgetown, Kentucky, Denise—a Kentucky native—was fascinated by Japanese culture and had the desire to learn the Japanese language. But neither her high school nor the college she attended offered Japanese language classes. When she discovered that her college, Morehead State University in Kentucky, offered an exchange program with a Japanese university, she immediately applied. Denise was accepted and went off to Osaka to study at the Kansai University of Foreign Studies. During her exchange year, Denise managed to break free from the circle of international students participating in the program and make friends with Japanese students. Denise says this was the key to learning the language and getting to know the culture from the inside.

After her time abroad, Denise returned to the U.S., finished her college education, and started to look for ways to go back to Japan to meet up with her friends again and continue her language training. A career fair in Boston, focusing on people speaking both English and Japanese, helped her land a job with an American company looking for a sales representative in Osaka.

“The beginning was really rough,” Denise says. “Many times, I came home at night, crying and feeling lonely.” Since she had impeccable pronunciation in Japanese, native Japanese customers wouldn’t slow down or explain anything when talking to her. “It took me hours to write the sales reports due on Mondays.” But developing her language skills and knowledge of the culture helped Denise lay the foundation for her later work as an interpreter.

A Career in Japanese Translation and Interpreting

As a part of her sales representative job in Japan, Denise also began interpreting occasionally, bridging the language gap between American company representatives and local employees and customers. Since she had no formal training in interpreting, she had to learn it on the job through lots of practice, self-study, and hard work. After 10 years in Japan, she returned to the U.S. and continued her career as an in-house interpreter and translator at Honda R&D Americas, Ltd. Since May 2006, Denise has been working as a freelance translator and interpreter for automotive company clients and suppliers in the automotive and aerospace industries. She is based in Orient, not far from Ohio’s capital city of Columbus.

Denise has shared her professional expertise with colleagues at ATA Annual Conferences. At the 2017 conference in Washington, DC, she participated in a panel discussion about the automotive industry as a major source of work for Japanese language professionals. She enjoys the networking opportunities that ATA Annual Conferences provide. In addition to her active participation in ATA, Denise is a member of the Japan Association of Translators.

Presenting to Interpreting Students at the University of Michigan

In January 2019, Denise received an invitation from Professor Yoshihiro Mochizuki to give a guest lecture at the University of Michigan. Denise and Yoshihiro had met the year before, in Columbus, where they both held workshops for members of the Japan Association of Translators—he on translation, she on interpreting. Yoshihiro wanted her to share her experience working as a freelance professional interpreter with the students enrolled in his new course on Japanese interpreting.

Denise began her presentation by talking about how a professional interpreter is expected to behave. After explaining the different modes of interpreting, she provided an overview of the equipment that interpreters traditionally use. She shared photos of various portable equipment and what a typical booth setup looks like. She concluded her presentation with information on tools for terminology management and led a Q&A session.

Denise was pleasantly surprised by the active participation of the students, who had a stream of questions for her: Had she ever found herself in the work scenarios she had discussed, and how had she handled these situations? Is there a certain personality type that’s more suited to the interpreting profession?

Denise enjoyed the animated discussion during her presentation. Students also approached her after the class with more questions, and some asked to exchange contact information. 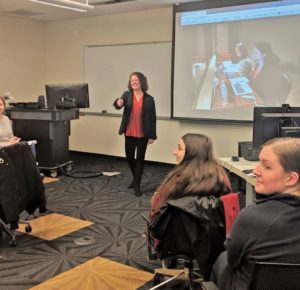 Denise Fisher at the end of her lecture at the University of Michigan accepting a stream of questions from students.

Getting Involved in the School Outreach Effort

Initially, Denise had thought that ATA’s School Outreach photo contest was only for ATA members presenting to young children. It was Yoshihiro Mochizuki—not only a professor at the University of Michigan but also administrator of ATA’s Japanese Language Division—
who suggested she participate in the contest with the photos he took during the lecture. Thanks to his tip, she submitted her entry and won the contest, getting her a free registration to ATA’s 60th Annual Conference.

Denise thoroughly enjoyed the conference in Palm Springs. “The conference was even better than I imagined. The location was scenic, the weather was perfect, and there were a lot of educational sessions and networking opportunities.” Her favorite session this year was “From the Stage to the Booth: Acting Tips to Improve Your Interpreting,” presented by Javier Castillo. “There was a lot of overlap between his lecture and my own lecture. I would love to collaborate with him on a joint session at a future ATA conference!”

Birgit Vosseler-Brehmer, CT is an ATA-certified English<>German freelance translator based in Germany, specializing in technical, business management, and document translations. She is a member of ATA’s School Outreach team. Contact: bvb@bvb-translations.com.